On our way from Reykjavík to Akureyri, we took a detour to visit Þingvellir, the site of the first Icelandic parliament. These three shots were all taken there: 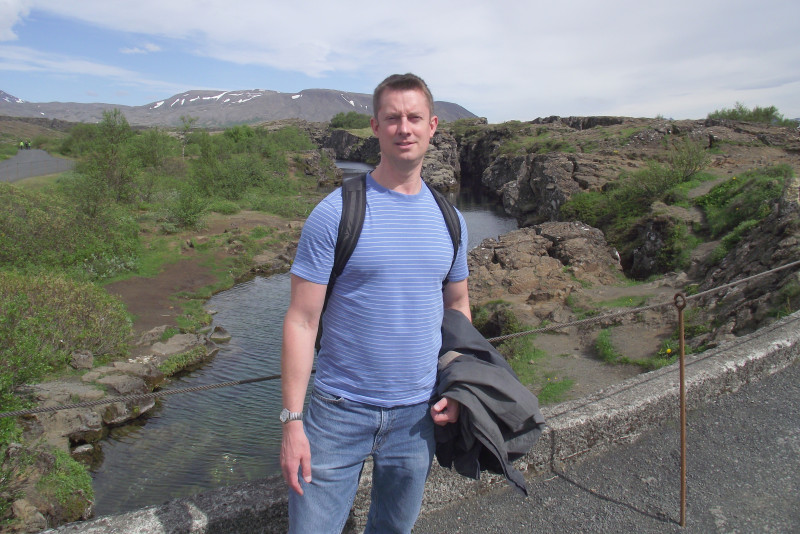 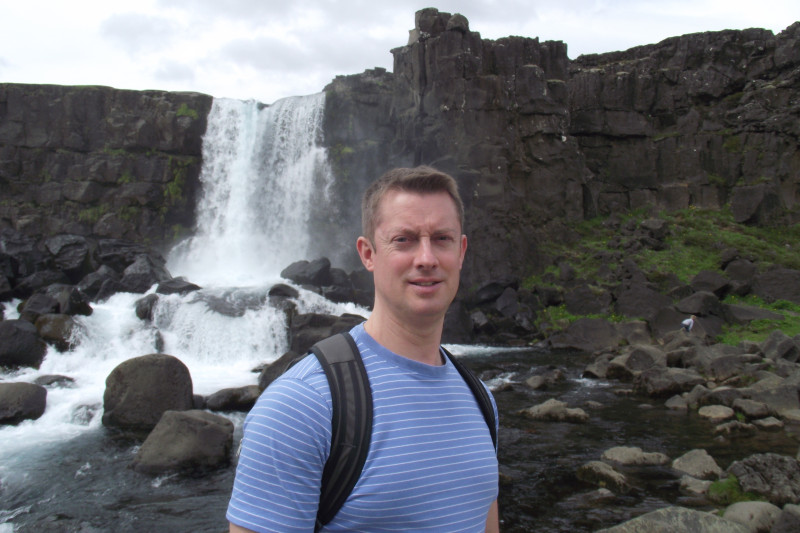 This picture and the one below were taken at Öxarárfoss, the waterfall at Þingvellir. 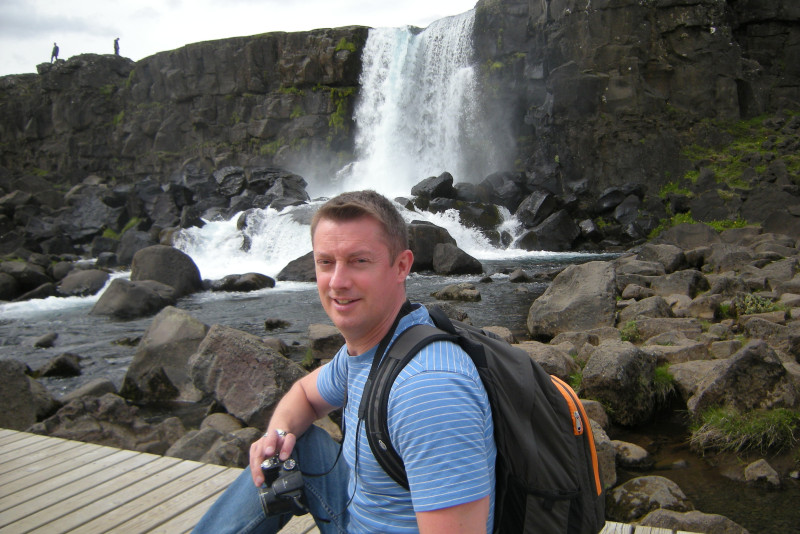 Mark and I have so few pictures of the two of us together. I have none on my camera, since Mark always gave his to strangers to snap pictures of us. This one is from Dalvík, after we got off the boat from Grímsey: 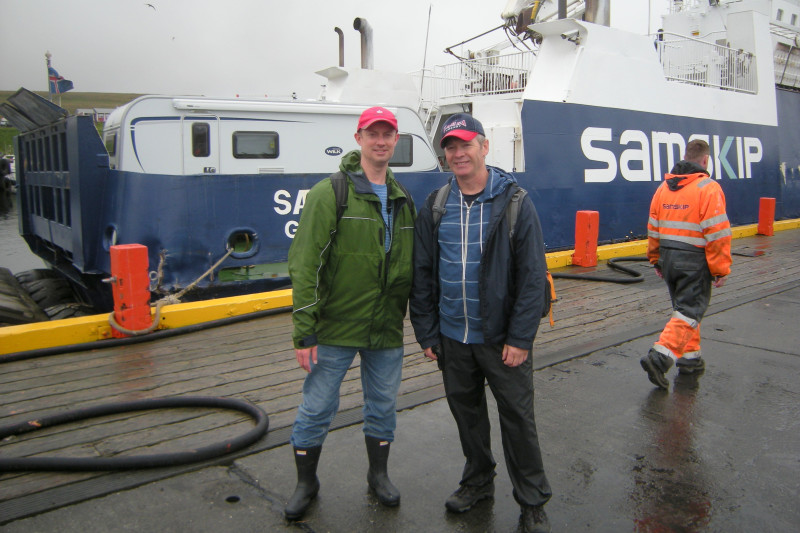 We visited the sulphuric mudpots at Hverir. The earth bubbled and the steam drifted curtains of thick sulphur. It was both beautiful as well as revolting to the olfactory senses: 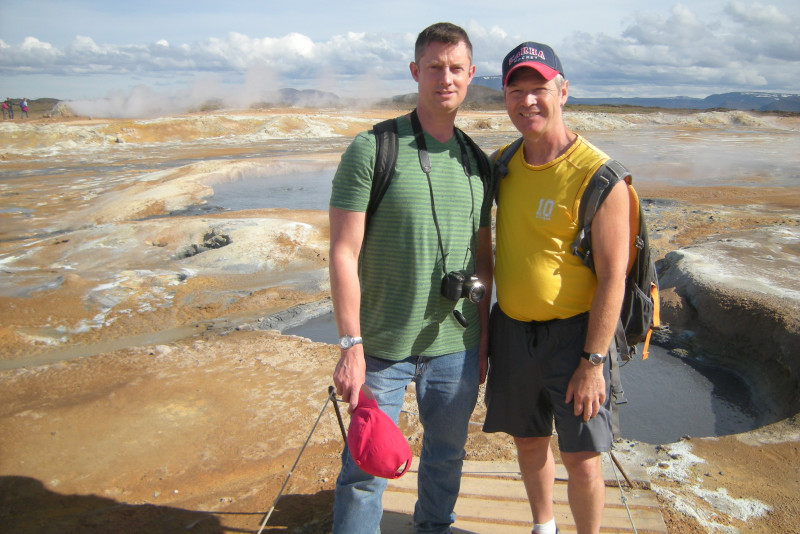 Dettifoss behind us, on the way from Mývatn to Seyðisfjörður. We also picked up a hitchhiker, Andrew, who snapped the photo: 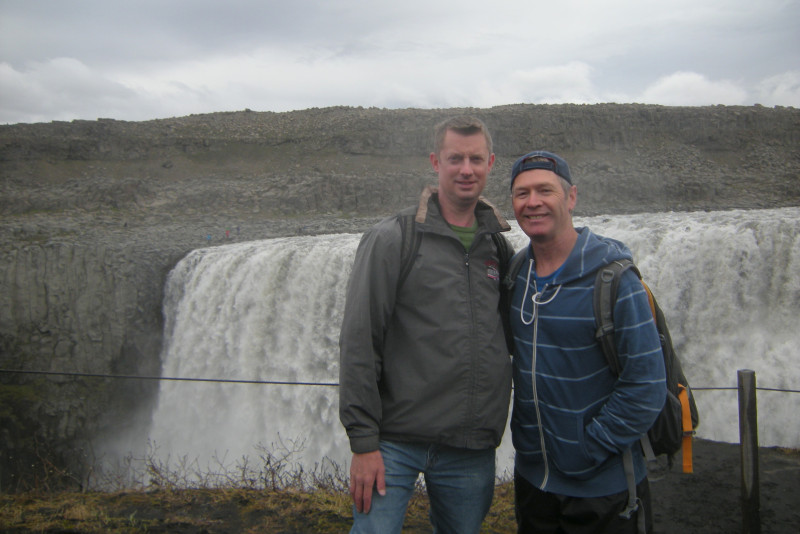 Me and our hitchhiker friend, Andrew: 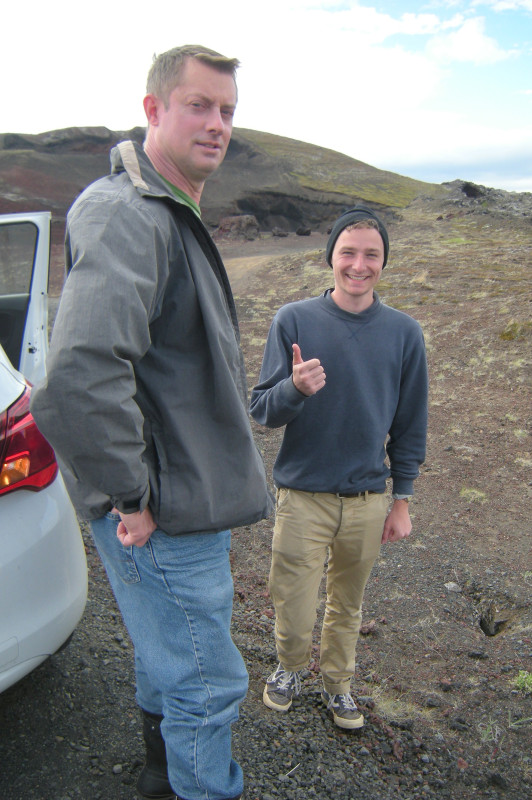 We saw many hitchhikers in Iceland, everywhere except Reykjavík. When we were planning our trip, Mark and I considered not renting a car at first; we would have taken buses to go around the entire country. However, we discovered that even in the summer months, the bus schedules were infrequent. We’d either arrive in one place and have barely two hours to see it, or would have to wait 36 hours for the next bus. It was worth it to rent a car and come and go when we chose, and stay in places as long as we liked, as well as take advantage of any scenic spots we saw on the way.

While in Grímsey, I ran into Andrew as he was coming out of a grey house. This house was a gift store, as well as a hostel for backpackers (although I didn’t know it as a place of accommodation at the time). That house is seen here: 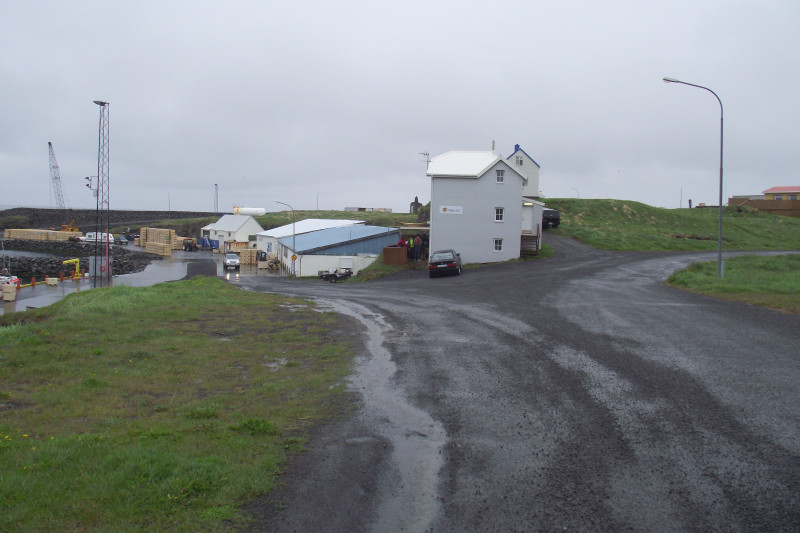 I walked up the staircase on the right side of the house, thinking I was going to the gift store, when the white door opened, and Andrew came out. He spoke to me in English, telling me that this was a private residence. I apologized profusely, thinking that I had almost committed a home invasion on this isolated island. He directed me to the gift store on the other side of the house. You can see a group of people mulling about a porch, to the left of the parked car in the above photo. I went into the store to buy some postcards as well as a photo book about Grímsey. Mark and I were so exhausted after our four hours of hiking on the island that we fell asleep on the calm trip back to Dalvík. While we were both drifting in and out of slumber, Andrew and a young man, whose name we later learned was Edouard, sat next to us two seats over. None of us spoke to one another, although I recognized Andrew (whose name I didn’t know at that time either) as the guy whose house I nearly broke into. It wasn’t until after Mark and I gave ourselves a short tour of Dalvík that we ran into these same two guys hitchhiking. I asked Mark to pull over, telling him that these were the guys sitting next to us on the ferry ride back. It turned out they were going to Akureyri, which was where we were headed, so we gave them a lift, and made proper introductions then. At that time I learned that the grey house was also a hostel and that Andrew was a native Australian, not an Icelander from Grímsey.

We let them off in Akureyri, and Mark and I returned to our hostel. Later that evening, as we walked through the town on our last night there, we did spot both of them walking around on their own, but did not stop to say hi. The following morning we had plans to see the waterfall Dettifoss, and then drive all across the northeast to the coastal village of Seyðisfjörður. When we left Mývatn town limits we were not surprised to see another hitchhiker. But when we got closer we could see that it was Andrew! We asked where he was headed. He said Dettifoss. Amazing: he was headed to the same waterfall we were going to. And then after that, he was headed to Egilsstaðir. We would have to pass through Egilsstaðir en route to Seyðisfjörður, 27 km to the east. So we had Andrew accompany us all across northeast Iceland.

There are beautiful waterfalls all over Iceland. This is the two-tiered Gullfoss, which really is surrounded by such bright greenery. I have to tell myself all the time that the colours in my photos are not processing errors. I did not heighten the colour palette to accentuate the green. Iceland in the summer is hyper-green. Look at my raincoat and rain pants: that’s their normal colour, as is the grass behind us. 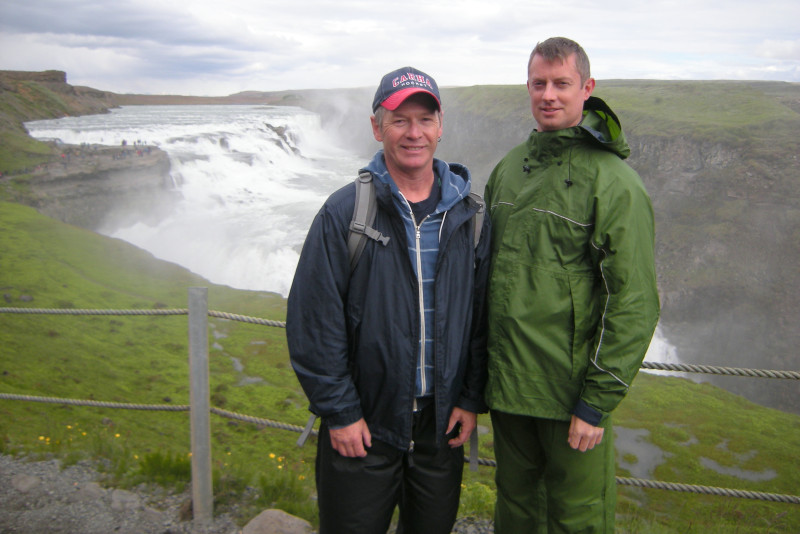 The best meals we ate on our trip were the fish dinners served in a pan at Fiskibarinn on Heimæy. We went there twice. The first shot was taken on the second night but it’s the best shot of Mark outside the restaurant: 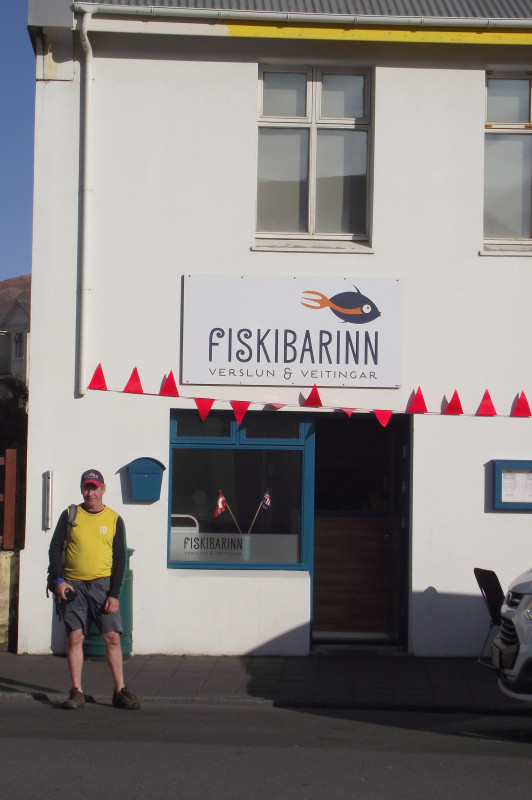 Shots of us and our food the first night: 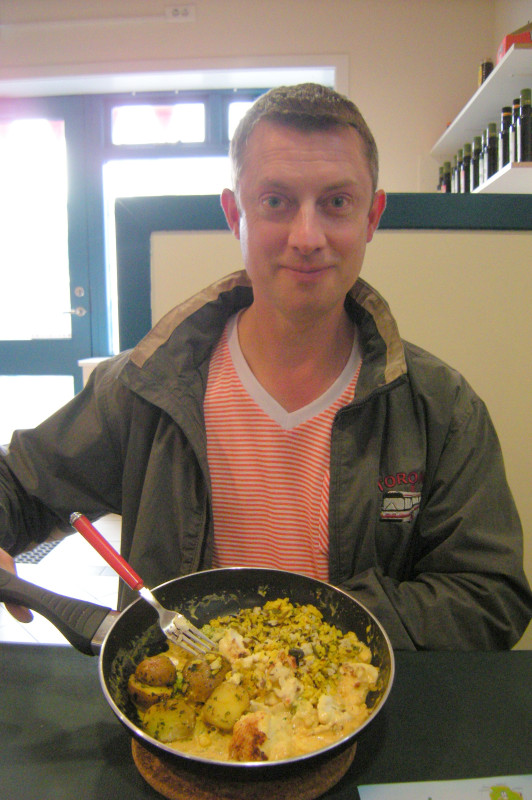 When the chef weighed the fish for our dinners on the second night, he overestimated the amounts for both of us and instead of slicing the excess amount off, he told us “I think you can eat this much” and didn’t charge us extra. We wanted to order some lobster soup (you can see it on the blackboard menu beside Mark) but the chef told us there wasn’t any left. He let us have what was left in the pot for free. However, from our judgement, the bowl he gave us was 90% full. The chef was so kind to us. Was it because we were repeat customers? Since the tiny restaurant was full at that point, we decided to eat the soup while standing up, and it was so delicious, with generous chunks of lobster in it. By the time our main courses were ready, we found a table: Go to Fiskibarinn, the best restaurant in all of Iceland!

I was in much pain as I ate, since I had sliced open my right knee and ruined a pair of pants when I tripped on a curb. This happened on July 9, and while I have since seen a doctor here at home, both wrists are still sore (since I instinctively had to break my fall and both wrists kept me from falling face first onto the pavement) and I cannot rest my weight on my right knee without wincing. No panic from the doctor visit, although the scab on my knee is still there (as of August 4–and it’s big) atop a bulging red knob of coagulated blood. How ironic. Mark and I went hiking up mountains on our way to explore the glacier Vatnajökull and I nearly got stranded on a mountaintop, thinking I’d have to spend the night there. And then earlier on in the day before I sliced open my knee, we hiked up this mountain on Heimæy: 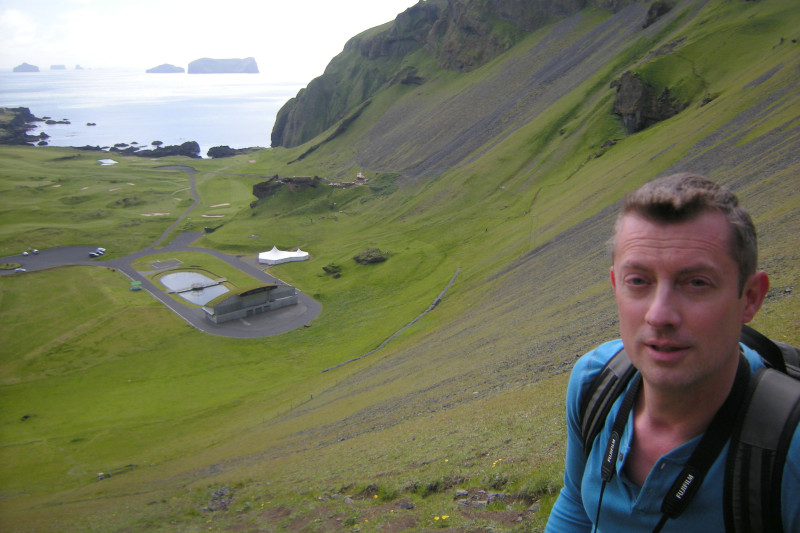 Look at that angle! It was so steep, I was crawling up on my hands and feet, clawing at the ground. I was not thrilled to see this sign near the top: What!? We get so far to the top after clawing our way up, only to be told to find a new path? Anyway, I survived being stranded on top of a mountain, and then from this extremely steep hike. What in the end did me in in Iceland? Not falling off a cliff. Not falling into a glacial crevasse. Not tumbling down a steep hill. No–I was sidelined by a blinking curb.