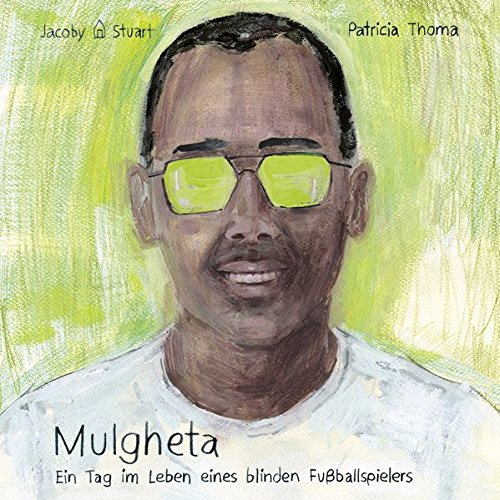 The first book I read was Mulgheta: Ein Tag im Leben eines blinden Fußballspielers written and illustrated by Patricia Thoma. Mulgheta Russom is a blind soccer player from Germany. Thoma drew pictures from Mulgheta’s daily life on and off the soccer field and told his story through the eyes of a young girl. Mulgheta rides the train to work, makes his own dinner and invites friends over for parties. He works in a fitness centre as a masseur, where:

= “His sensitive hands can feel every tense muscle.”

Thoma illustrates the aids Mulgheta uses to function in a sighted society. Crosswalk signals beep or tick to alert him to start or stop walking. The soccer ball rattles so players follow it by sound. Elevator buttons are in braille. The train platform has textured paths.

Within some pictures Thoma has incorporated other people who are living with disabilities. There is another blind man with a guide dog and cane, a blind woman shopper, older adults in wheelchairs doing their grocery shopping as well as the young narrator herself, whose mother uses a wheelchair.

The young narrator cannot help but ask some curious questions, such as:

= “Do you have a favourite colour?”

= “Does Mulgheta turn the light off before he goes to bed?”

We see Mulgheta busy in the kitchen preparing kebabs for a get-together. He talks about his evening plans and then the narrator asks:

at which point the book opens into a double-page spread of excited young men standing over a table of kebabs while a soccer match plays on a giant flat-screen TV. Mulgheta answers:

Five endnotes explain in more detail about the game of blind soccer, audible traffic signals, textured walkways at train stations, braille, and the use of lights in the homes of blind people.