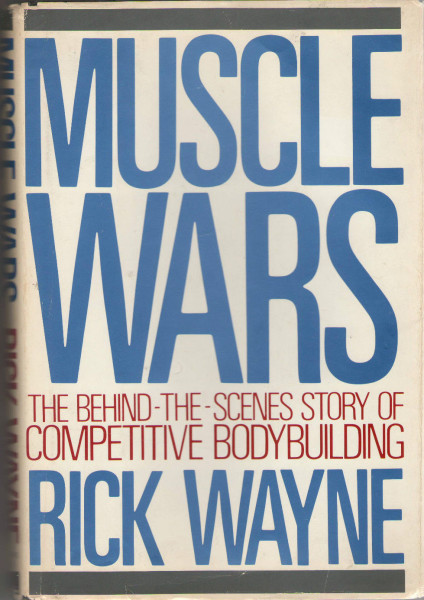 Muscle Wars: The Behind-the-Scenes Story of Competitive Bodybuilding by Rick Wayne is a 1985 insider’s account on the goings on within the insular world of the high end of physical culture. In the past thirty years this book has attained mythical status, and copies sell for big bucks on eBay and Abebooks. I obtained a copy via interloan from York University. Now that I have read the book I can reveal that I learned nothing that I didn’t already know about the biggest physique stars of the day. All the scandals and inside information Wayne wrote about are now common knowledge. It is no secret that scandals abound in physique contests (or “muscle wars”) as judging is so subjective:

“After all, how muscle wars end is always a matter of opinion, never a matter of objectively ascertainable fact. Nothing is ever certain.”

Wayne shies away from calling bodybuilding contests nothing more than beauty pageants for muscles, where the determining criterion for success is not musculature but rather who you know on the judging panel and how marketable you are to magazines and supplement companies.

Muscle Wars created such a sensation because of its laid-bare revelations within the bodybuilding subculture, especially the vast homosexual undercurrent of sugar daddies who sponsor these musclemen. Wayne himself, from the start of his bodybuilding career when he visited the US for the first time, had to deal with amorous executives who expected him to spend the night. One even offered him a job as a live-in valet with benefits. Gay culture has always been active in the bodybuilding underworld. How do you think bodybuilders afford to maintain their lifestyles? There is no money in spending your whole day at the gym, eating only the best foods (which are expensive) and plugging your body with vitamins, supplements, steroids, insulin, growth hormone and the like. These men are walking drugstores and in no way could afford to be a top bodybuilder without outside support. In addition to his bodybuilding career Wayne earned additional income as a writer for Muscle Builder magazine. He shared one of the verboten topics for magazine inclusion:

“At Muscle Builder, writing about the guys’ existence away from the gym was strictly taboo. To do so would be to open a Pandora’s box, and, Lord knew, bodybuilding couldn’t survive the fallout. How the champs met their rent and their enormous food bills, how they paid for their vital food supplements and steroids when the majority had no visible means of support was strictly their business. When the cops nabbed a Mr. Universe winner for pimping and operating several brothels, the story made headlines on both coasts–but not in Muscle Builder. The magazine turned a blind eye to the fact the some of the hottest properties to be found in Times Square–hardly the sort to interest Century 21!–belonged to big-name musclemen. And while at least a dozen of the West Coast’s adulated hunks had sugar daddies, you’d never know it from reading their life stories in Muscle Builder, where every word aimed at ‘glorifying the guys.'”

Many men as they embark on their muscle careers prostitute themselves or earn their incomes making pornos or (now) solo Internet sex shows for private audiences. I state upfront that I cannot qualify any quantity of men, whether I use the modifier many or some, but I imagine that more bodybuilding men are involved in some form of sex work to supplement their lifestyles than budding football or baseball players. This remains bodybuilding’s biggest unspoken secret to this day. Often physique stars, both men and women, learn that a surefire way to earn money is by catering to the fetish community. Have you ever seen the movie “Pumping Iron”? At a regional bodybuilding show, allegedly heterosexual men fill the audience. They are seen slapping their thighs, stomping their feet, clapping and cheering for their favourite bodybuilders as they pose. Is this a reaction of homoeroticism incarnate, yet under the guise of a primal reaction to hypermasculinity, where admirers gush over the most alpha of males? Wayne revels in it, and I think he flaunts it, by inserting homoerotic terminology in his descriptions of bodybuilding show audiences. Wayne describes a posing routine by Arnold Schwarzenegger:

“At the end of his stage presentation he stood tall and proud, hands on hips, basking in postorgasmic bonheur.”

I smirked when I first read descriptions like this, glad that Wayne had the balls to tell it like it is. I didn’t record any of his “orgasmic” comparisons until I had already passed a few. Wayne echoed the scene from “Pumping Iron” below in the following audience reaction:

“All that had gone on before–the uncontrolled lunacy, the uninhibited displays of male lust for male flesh…”

Controversial judgements are not new to sports that cannot be measured by the Olympic “faster, higher, stronger” motto. That is the reason I feel that sports that are presided over by human judges, such as figure skating, synchronized swimming and gymnastics should not be Olympic events at all. (And I don’t mean “higher” in the sense of attaining a higher score.) Bodybuilding–to call it a “sport” is ludicrous–since the start of organized competitions has been tainted by favoritism, unscrupulous judges and always by the bottom line. Wayne covered at length the back-to-back Mr. Olympia debacles of 1980 and 1981 which saw the poor physiques of Arnold Schwarzenegger and Franco Columbu win each contest respectively. Muscle Wars was the first work that I know of to call both of these competitions’ results tainted.

Wayne liked to sprinkle this book with French and Latin phrases, as well as some pretty highfalutin English terms. However no brain-dead musclehead is going to know what any of that stuff means. Some of the guys I see at the gym have obviously never picked up a book in their lives. I suppose Wayne’s target audience is those who like to read about bodybuilding as well as engage in it. He also provided histories of bodybuilding infrastructure and the relationships between rival promotional organizations, plus a detailed account of how the first Mr. Olympia competition came to be.

I am sorry to report that my interloan copy had several pages missing: 87-90; 93 and 94; 101-104; 131 and 132; 179 and 180; 249 and 250. No doubt the vandal wanted the photos on the other sides of the printed pages. Muscle Wars was 257 pages long yet not overrun with photos as filler. I am thankful Wayne included photos of the forgotten bodybuilding stars of the fifties, in the years preceding bodybuilding’s “golden era”.

The copy I read had been rebound and thus did not have the original cover as depicted above. The spine of my copy looked like this:

And the author in his prime: