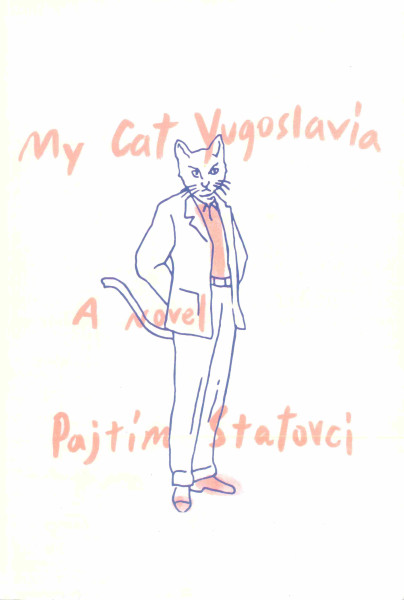 My Cat Yugoslavia by Pajtim Statovci was recommended by Mark. He read it and lent me his copy. His last recommendation was The Last Resort: A Memoir of Mischief and Mayhem on a Family Farm in Africa which was a five-star read. My Cat Yugoslavia was originally written in Finnish which I did not know until I read the publication page. It was translated by David Hackston. I cannot recall seeing this book in 2016 or 2017, when I was last in Finland. I always look at current titles when I am over there yet the cover of the original, Kissani Jugoslavia, did not strike me as familiar (and a cover like that certainly would have). Perhaps this was on account of the novel’s original publication date: it came out in 2014 yet was no longer a current title by 2016 and likely would not have had front-cover display space.

I loved this novel, and could not put it down. Hackston’s translation flowed so speedily that there were no awkward passages that reeked of being a poor translation. I am dying to compare it to the original because he injected some English equivalent phrases for some Finnish expressions and it would have made no sense if he had literally translated the Finnish word for word. There were some passages where the characters in the original novel must have spoken in English, for Hackston had to indicate this especially.

The novel has two parallel stories, the first one starting with Bekim, a young gay man. His family fled to Finland in the 1990’s, after escaping the war in Yugoslavia. He has a pet boa constrictor which mainly likes to slither out of its terrarium and hide behind the couch. The snake could represent Bekim, a loner always wanting to hide and not be noticed. He is a young refugee in Finland, where the locals torment him, beat him up and can’t wait till the war in Yugoslavia is over for him to go back. His other animal companion is a tormenting dictator of a cat which is never named by Bekim yet represents his homeland. The cat insults and belittles Bekim, demanding and expecting everything of him, which he supplies without objection. Would these have been the expectations of Bekim, had his family remained in Yugoslavia? Would he have been expected to act a certain way had war not driven his family out?

The second story centred on Bekim’s mother, Emine, a young woman betrothed to Bajram. They live in the Serbian province of Kosovo. The description of her wedding is a lesson in Serbian matrimonial customs and traditions, complete with elaborate emoting ceremonies and consummation rituals. Emine is not a demonstrative woman and is subservient to her husband, and does not seem to be happy. She is isolated at home raising her five children and although she and her girlfriends in Yugoslavia thought that Bajram was a good catch, she realizes even before marrying him that he is sexually abusive. She eventually leaves her husband but only after the children have grown.

Statovci alternated between the two characters yet sometimes I couldn’t tell right away who he was writing about at the beginning of each chapter. Bekim and Emine shared too many similarities that I could not figure this out immediately. I didn’t encounter this confusion until the end of the novel. As I started a new chapter I read it with one character in mind, but then chose to reread it when I discovered that the author was writing about the other person. Since both Bekim and Emine share the status of feeling like outsiders, the passages could have applied to either of them.

I took many notes about the author’s inventive and evocative similes. Some of the most striking are:

“The cat seemed suitably impressed, fiddled with his thick-rimmed sunglasses, and pulled his face so that his two incisors appeared at the sides of his mouth like two anchors lowered from the deck of a ship.”

“His thick whiskers extended into the room like sharpened pencils and his breath cascaded into the air with a gentle wheeze.”

“White chairs were dotted around the yard like a frightened shoal of fish, and the lawn was awash with cigarette ends that looked almost like small pieces snapped from the white plastic chairs.”

“We were an empty blackboard and Bajram a wet rag splatted right in the middle.”

“The air would be soft as guitar music, and the airplane would slowly turn in the sky like a whale, and nobody would hear it.”

“The snake had slithered behind the sofa, its skin smelled rancid, in dim lighting its color turned from brown to black, and it moved slowly but surely across the floor like a pile of rolling pebbles.”