I arrived in Helsinki this morning as I embark on my ninth trip to this beautiful country in its centennial year. However, before I got here, during my eighty-minute stopover in Keflavík, Iceland I arranged to pick up an order at the Eymundsson airport bookstore.

When Mark and I toured around the entire island of Iceland in 2015, I felt that while everyone could communicate in English no matter where we went in the country, nonetheless I would have appreciated the use of a dictionary. I am a language nerd and would have loved to have a lexical reference to be able to read signs, product labels, and so forth. Neither of us has a mobile phone to check the Internet on the go.

Dictionaries were for sale all over Iceland, yet I didn’t buy any while I was over there because the prices were so high. I thought–mistakenly–that I would be able to find them cheaper at home or via websites I usually shop at. I was so wrong. The dictionaries were no cheaper over here and I regretted not buying them on Icelandic turf when I had the chance.

Thus when I realized my flight to Helsinki was going through Keflavík, Iceland, I had an idea. Since I knew the airport bookstore didn’t stock the dictionaries I wanted–I remembered that they only had pocketbook dictionaries in stock (which is no surprise for an airport bookstore)–many weeks before my departure yesterday afternoon I contacted the staff at Eymundsson to ask if they could arrange a store-to-store transfer. In other words, could I order the dictionaries I wanted and pick them up at the airport store? They said sure.

They said they’d have them waiting for me today when I transferred flights but when I asked for them, the two volumes were on the open shelves. Just two out of place, lonely hardcover unidirectional dictionaries sitting among the stacks of paperback pocketbooks. I am thankful no one bought them before me. The airport price was considerably cheaper than the price on the Eymundsson website since I was not paying the appropriate tax. Here are photos of the Icelandic-English volume and the English-Icelandic volume: I arrived in Finland five minutes ahead of schedule at 07.15. My plan was to take the new train from the airport downtown. This train was completed in December 2015 and I took it to the airport in April of last year. I was in a hurry to catch my plane that I did not have time to take pictures of the station then. I barely had time to look around in awe before I realized I had better get a move on. So I decided to spend time this morning and photograph the station. I was arriving so early that there wouldn’t be a lot of people around and I could afford to hang around the platform taking pictures as train after train passed by. At 07.51 the station was not busy. The escalators are not as deep as Pyongyang’s (but might be as deep as those at the Toronto Island Airport): Before you enter the platform there is this viewing area overlooking the tracks on both sides. One side is right next to the tunnel entrance, so you can see the trains enter the station while standing just above them: 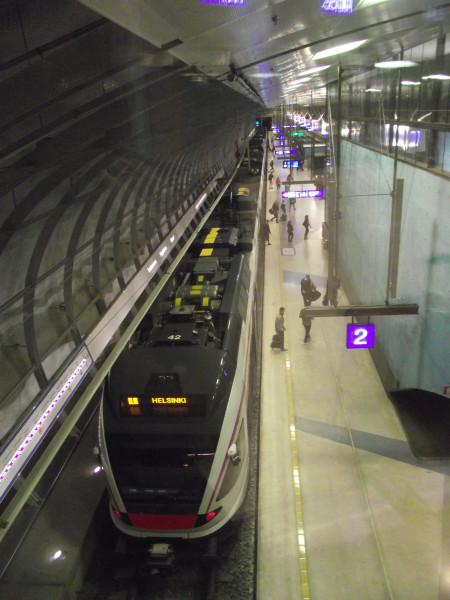 When you leave those escalators and enter the station: Whoosh! A train arrives to take you to the central railway station (fare is five euros): 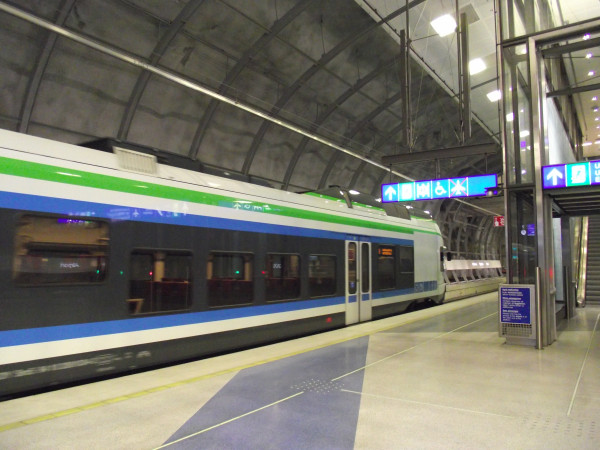 I headed straight for the hostel after I arrived at the train station. I was going to ask them if I could leave my suitcase there before I checked in later that afternoon, but luck was shining down on me when they said that my room was ready now. So I dropped off my stuff and rested a bit, then headed out to the two biggest retail bookstores, Akateeminen Kirjakauppa and Suomalainen Kirjakauppa. There was no need for me to buy anything as I was going to be in Helsinki for five days next week, but I did get some ideas for future reads. I spent far too long in those two stores (no surprise) and I was getting tireder and tireder as well as hungrier and hungrier. So I went grocery shopping and–since I was already there–stocked up on some Finnish shampoo. I bought some fragrant scents last year and have already used them up.

Tomorrow morning I leave for Turku on the southwest coast. I will see Ultra Bra in concert on Sunday night. The last time I was in Turku was in 1999 during my first visit to Finland. I have only passed through Turku since then, as in past trips I got the ferry from Turku harbour to Stockholm (twice) and to Långnäs in the Åland Islands. It was in Turku that I first heard the music of Ultra Bra in Free Record Shop, when I asked a young couple to recommend to me some good Finnish music. The Helsinki hostel where I am staying will let me keep my suitcase in their storage room so that I will only need to take my backpack to Turku. Once I get there I have to go pick up my wristband as I have a VIP ticket.