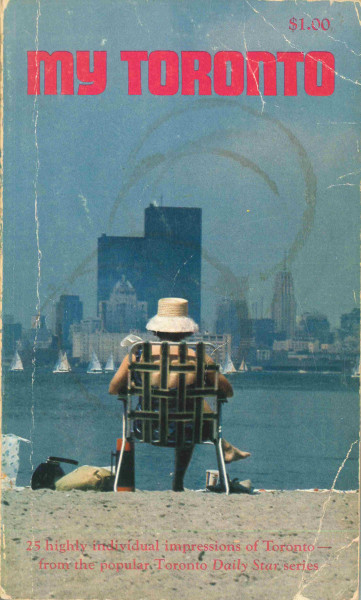 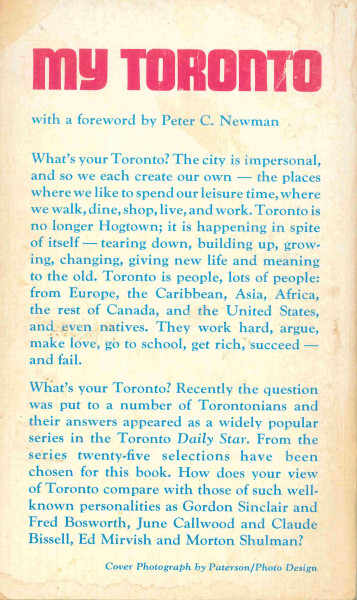 In 1987 I worked part of my summer at the Sheridan Library. One of the library regulars was a senior woman, Connie Hill. I remember her mostly for her long white hair. She came in to donate some books and one of them was My Toronto, composed of 25 highly individual impressions of Toronto written for the Toronto Daily Star. Just knowing the name of the newspaper–and the shot of the Toronto skyline on the front cover–should tell you the age of this book. It was published in 1970. We could not accept this book as a donation to add to the collection because of its condition (just look at the cup stains on the worn cover) but as it was a history of Toronto from 1970–a time when I still lived in the city–I kept the book for myself. I have had this book for the past 33 years yet never read it until now.

Each essay was written by a notable personality, which included mayors, university professors, architects, plus well-known names such as June Callwood and Ed Mirvish. I wonder how many of these people are still living half a century later. I was struck by the similarity in observation: many of the writers wrote of Toronto as a city of contrasts. Lionel Rubinoff, a professor at York University, wrote:

“To be in Toronto, then, is, for me, to experience the embodiment of my old self-hood. It is a world of opposites. A world of diversification and monotony, a ceremony of innocence and squalor. It is both the fulfilment of and the betrayal of its history. It thrives on a mixture of old world charm and new world efficiency. It lingers between peacefulness and terror. I find it charming, for example, to walk about in Rosedale. But I find it somewhat terrifying to hover about a suburban shopping plaza just after school is let out, or sip beer in a sleazy downtown pub after dark. I find it exhilarating to walk about the Kensington Market on a Saturday afternoon, but very depressing–though much more efficient–to go shopping in a supermarket on a Thursday evening.
“If you want to experience the strange thrill which comes from the encounter with unconnected opposites, take a drive down the Don Valley Parkway on a sunny afternoon. Notice the pleasant montage of trees and grass decorating the slopes of the Don River. But don’t open the window too wide lest the stench of that very same river spoils your fun. Turn off on to the Bloor Street exit and notice the interesting juxtaposition of large elegant homes in the Castle Frank area, on the southern edge of Rosedale. One builds up visions of a prosperous but relaxed city still lingering in the nineteenth century.
“Suddenly there is St. James Town, modernity’s gift to urban man, massive high rises of spotless efficiency. A style without a history; functional, but graceless.”

Dennis Duffy, a professor at the University of Toronto, wrote that “cities thrive on the co-existence of disparities”, while Peter Swann, director of the Royal Ontario Museum, wrote:

“Toronto’s a world of prejudice and open-mindedness, stand-offishness and friendliness, honesty and dishonesty–a fascinating compound of contradictions, but well-balanced ones.”

Next to the common theme of opposites, a number of writers also lamented the missed opportunities for the development of the waterfront. The railroad tracks ruined this yet the creation of the Gardiner Expressway set access to the water back “a hundred years”.

One of my favourite lines was by John Sime, director of the Three Schools of Art, lamenting the destruction of Toronto’s architectural heritage:

“The buildings we destroy we replace mainly with nothings, and one can cope with most of them by not looking.”

I took many notes as the writers made references to a Toronto that is now no longer. The wrecking ball has destroyed some of these buildings, which were lauded in My Toronto for their attractiveness and functionality. One of these structures was Lothian Mews, an indoor shopping mall at 96 Bloor Street West connecting north to Cumberland Street. it was created in 1964 yet demolished only twenty years later. I wonder now, perhaps in my teenage years if I had ever walked through it.