My True Hidden Hollywood Story: My Memoir of Sexual Harassment, Blacklisting, and Love Affairs with the Most Powerful Men in Hollywood 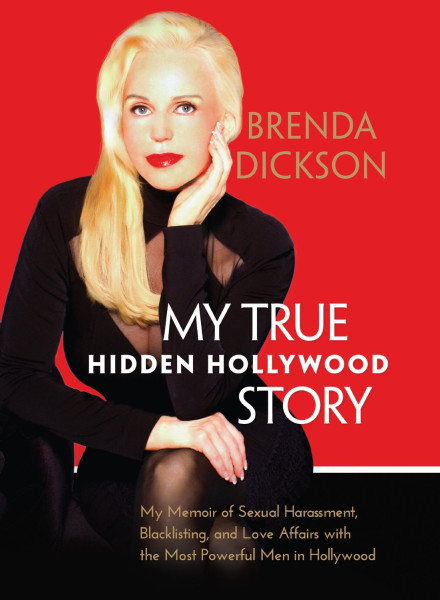 Dickson was famous in the seventies and eighties for playing Jill Abbott on “The Young and the Restless”. I however don’t know her from this role, as my acquaintance with her is from the vanity video she produced in 1987, entitled “Welcome to My Home”, which has since gained worldwide attention for her indispensable advice on style and fashion. Brenda starred, wrote and produced “Welcome to My Home” and it lives on as a timeless snapshot of the way the beautiful people lived in the mid-eighties.

My True Hidden Hollywood Story: My Memoir of Sexual Harassment, Blacklisting, and Love Affairs with the Most Powerful Men in Hollywood is Dickson’s account of her time on “The Young and the Restless” and the aftermath following her firing from the series in 1987. Dickson shares tasteful stories about her love affairs, who included Barry Goldwater, Jr., “Dynasty” star Michael Nader and “The Waltons” star Richard Thomas. She took great liberty with dates and tossed years all over the place, as some events wouldn’t have even happened if we accepted her chronology of events. For example, she alleged that her affair with Richard Thomas occurred when she was nineteen and he was seventeen, which would have placed the year at 1968. “The Waltons”, however, didn’t appear on television until 1972. Dickson wrote of going to “The Waltons” set with Thomas and meeting his costars, so their affair couldn’t have started while they were still teenagers. The years didn’t add up in countless other reminiscences, and I noticed a pattern in Dickson’s telling of events that she shaved off three years from her birth year. It is common knowledge that she was born in 1949, and at the end of the book she mentioned her real age on at least two occasions, so she obviously had nothing to hide. The chronological discrepancies were likely due to the way the book was compiled.

My True Hidden Hollywood Story read like an excruciatingly bad transcription. I will not fault Dickson for recording her memoir versus sitting down and actually writing it, as most celebrity works are “written” this way. The fault is with the transcriber whose spelling errors amounted into the dozens. I have never, ever read a book with more spelling mistakes. That Dickson acknowledged a proof reader named Larry Link in the Dedication made we want to find this man, give him a good shaking and point his nose towards a dictionary. My eyes rolled heavenward as I encountered glaring mistakes such as whos for whose, rein for reign, lead for led, bought for brought, there for their, starring for staring, where for were, his and her for his and hers, gotten the some laughs instead of gotten the same laughs, and so many more I just didn’t feel like writing them down anymore. I should have known what I was in for: the first spelling error was seen as early as the book’s verso:

“This book is printed on acide-free paper”.

Personal names were given the same careless treatment, and even Brenda’s own mother was left with two different surnames. We see it as Irene Ulman in the Dedication then on page 34 as Irene Ullman. It was most comical when the errors occurred on the same page only two lines apart from one another, such as Patti Davis and Patty Davis, Johnny Grant and Johnnie Grant, and Judge Bode Uale and Uele, and then there were the occasions where the names were just plain wrong: Sally Fields, Farah Fawcett, Dino De Laurentis, Nicole Sheridan and the worst error of all, that of her “The Young and the Restless” costar Eric Braedon, who is mentioned multiple times in the book, yet never as Eric Braeden. How on Earth could Dickson have allowed such a hack job to go to print? The misspellings of personal names reflect badly not only on the transcriber and the asleep-on-the-job proofreader Larry Link, but ultimately on Dickson herself. The reader will think of nobody else except Dickson, and will regard her as barely literate in her own language.

It was unfortunate the chronological discrepancies and spelling errors were such a distraction from the memoir’s own story. As for the sexual harassment and blacklisting in the book’s subtitle, Dickson alleged that “The Young and the Restless” producer and writer William J. Bell tried to seduce her, and that once she was fired from the show, he was obsessed with ruining her life in any way possible. Dickson soon found out that she couldn’t get an agent or professional representation. No one would hire her either. While I am sure that blacklisting does in fact occur in Hollywood and the entertainment industry (just ask Eartha Kitt and McCarthy-era actors and writers) I believe Dickson’s own state of subsequent permanent unemployment had more to do with her supreme divalike prima donna opinion of herself. This, I admit, is one of the reasons why I love her so much, because she is so blind to her own narcissism. She herself spells it out in the book, proudly puffing out her ample bosom and saying, on more than one occasion:

“I can take a direction, not that any director had ever directed me”.

This kind of opinion of one’s own self-importance is a red flag for directors to stay away from her. Dickson claimed that Bell–always referred to as Bill Bell, using both names–was determined to ruin her life and didn’t stop at just blacklisting her. He apparently had influence in both the California and Hawaii court systems and through his connections with “Mafia judges” managed to leave her homeless and in poverty following two divorces. Dickson’s judgements were thus decided before she even stepped into the courtroom, because:

“Like all my court appearances, they were all fixed trials.”

Not only that, but her two custodial sentences (yes, Dickson has been imprisoned twice) were also down to Bell. This woman has plenty of blame to throw around for all of her professional and legal woes, while absolving herself of any responsibility whatsoever. But then that’s precisely why she has so many fans today, twenty-seven years since she last appeared on television: we love to see a blind prima donna sink. It’s schadenfreude, pure and simple. How else to explain my sly smile as I read about Dickson’s prison stories, how she suffered with terrible hair and skin because she had no access to quality shampoos and creams. At least she entered the clink in a Juicy Couture jumpsuit.

Dickson’s accounts of her legal battles flowed like a rambling monologue. These chapters at the end of the book were just a string of names of judges and corrupt two-timing lawyers, with so much repetition it was obvious that Dickson was just ranting into a microphone. As a result, it was painfully annoying to read about her legal troubles. If this book had had an editor, the legal chapters would have been structured to explain each side and the judgements rendered. Instead, Dickson rambled on and on, getting so caught up in her own story that she stated on many occasions “I am way ahead of myself here…”, evidence that she just talked freely, without anyone guiding her monologue along. That the transcriber actually included those remarks just showed that there was no regard to provide any editorial input at all.

How could an editor, or even a proofreader, allow such sentences to see the light of day on a printed page:

“In my opinion, everything in this book is my opinion. and what I felt, saw, and experienced.”

Dickson got her start in the entertainment business by bravely accompanying Bob Hope in a cast of singers and dancers during tours of Vietnam. If there is any merit at all to this book, it’s to read about life on the front lines in Vietnam. Dickson met many very young soldiers, heard their horrific war stories and comforted them in the hospitals. Much of her account of being in the middle of the Vietnam War was quite touching, especially when she described seeing maimed soldiers.

Yet still, the writing left so much to be desired, judging from the examples below:

“The mountaintops of several mountains would be covered with men…wall-to-wall men.”

Who’s minding the shop here? Didn’t anyone, anyone at all, read this book before it went to press? I don’t think so. No book after editorial scrutiny can be this badly put together to make its way to print. That is why I firmly believe that all the five-star reviews at Amazon.com and b n dot com are–yes, all–fakes. This is a pretty temerarious statement to make, yet every such review on these two websites sounds like a carbon copy of the other. Full of gushing praise, yet no mention of anything that is so obviously the editorial elephant in the room. I will bet that Dickson, or her proof reader Larry Link himself had a first-hand role in soliciting these five-star reviews from sycophant fans or friends.

So then, why did I shell out thirty dollars to buy this book? Why would a fan of Brenda Dickson trash it? All of my published reviews are honest. I will not cover up my disappointment in any book I read, even if it’s by an author ;whom I admire. As a fan of Dickson, I was aware for months that this book was in the works, and I check her website and YouTube channel every day, even multiple times a day. Dickson had the potential to write a soap opera exposé unlike any other. Keep in mind that fans do not shell out thirty dollars to buy a book with the intent to trash it. I had great expectations about this memoir. Let’s take a look at the finished product: it’s a sore disappointment.

While there is nothing good to say about the written contents, I was impressed by the way My True Hidden Hollywood Story was physically put together. It was printed on avery high quality thick paper. These pages will never yellow. Over seventy gorgeous photographs of Dickson in both colour and black and white, taken by the top photographers in Hollywood, adorn this rather heavy book. Dickson autographed it for me in luxurious gold ink. This woman ought to be on television today, and I would love to see her as the host of her own talk show, the guests of which I fear might end up suffering the same fate as Bill Hader’s “Lindsey Buckingham” on “What Up with That”, but still.