Names for the Sea: Strangers in Iceland 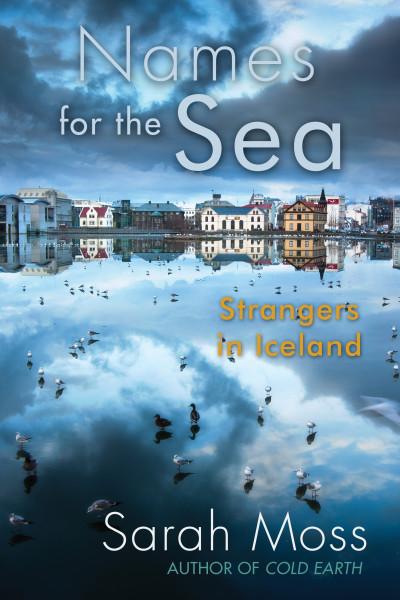 Sarah Moss and her family moved to Reykjavík when she got a job teaching at the University of Iceland. Names for the Sea: Strangers in Iceland is her memoir during her family’s year on the island shortly after the country’s economic collapse in 2009. I chose to read this book shortly after my own trip to Iceland, and chuckled over similar reminiscences about shopping and the peculiar ways stores position their goods. Where else but in Iceland do you step into a store like Hagkaup, and find not bread and vegetables near the entrance, but cosmetics and children’s toys? Moss and I embarked on similar adventures across the country and our experiences differed as often as they were the same. Moss taught in English and communicated with her students outside the classroom in her native tongue. Even so, she was exposed to the Icelandic language everywhere, yet was terrified of ever using it for fear of being misunderstood or ridiculed:

“On bad days, I still choose to go hungry rather than go into a shop and have to talk to Icelanders. I am ashamed to require Icelanders to speak English and too embarrassed to try to speak Icelandic, even though I know the words. I am afraid I can’t pronounce them properly, afraid people will laugh at me, afraid of the paralysing horror of standing there in a shop making incomprehensible noises.”

That was a perfect example where our two experiences differed. Where Moss avoided speaking in Icelandic at all costs–except in one brave interaction upon a later visit–I never shied away from trying out the language (although I probably annoyed everyone with my inevitable question “Did I say it correctly?” afterward).

Moss’s two young sons picked up the language and she joked about sending her three-year-old to act as her interpreter on occasion. These boys, Max and Tobias, had the kind of fun in Iceland that seems to have disappeared for North American or British children. There is too much regulation here, where everyone from babies to adults has to be protected from the unexpected. In Canada–less so than in the US, I believe–warning signs are everywhere, protecting the populace from anything and everything: traffic, falling rocks, surges of waves, errant deer and so on. You name it: if you can sue Mother Nature over it, there’s gonna be a sign warning you about it. Visitors to Iceland will see how brave the authorities expect their citizens to be. Moss points out with incredulity that in Iceland, you can walk right up to the edges of waterfalls without a warning sign or even a symbolic rope barrier. Children play in the lava rocks, around the glacial edges and next to the seething sea, all oblivious to any harm that might come their way. Moss learns to relax and let her children play without hovering over their every move. Her children, and she herself, are happier and healthier for letting her kids be kids.

In an attempt to learn more about Icelandic culture, Moss embarked on an ambitious project to read as much fiction and see as many Icelandic movies as she could (albeit in English translation or with subtitles). She was confounded by what she read:

“I simply don’t understand why the characters do what they do, can’t see the connection between speech and action. In apparently gentle novels of bourgeois life, characters rape and kill with no warning, no reflection and little reaction from anyone else. I find the violent episodes entirely unpredictable, never know at the beginning of a paragraph if the person coming through the door is bringing coffee or a crowbar to the person sitting at the table. I wonder why a society distinctive for its low crime rate should produce novels and films in which ordinary family life is invariably punctuated by bloodletting.”

and felt the same after seeing many films:

“Two or three times in each film, one of the men says something like ‘the folk over the fells are fleet of foot’ and then stabs his brother or son with a butcher’s knife or clubs him with an agricultural implement.”

In spite of my multiple trips to the Nordic countries, even to the high Arctic in January, I have never seen the northern lights. The people must hear that I’m coming and switch them off. Moss stood in awe as she watched these lights, and her descriptions of them made my mouth water, waiting for the day when I see them for myself:

“The bath was hot and I am able to stand there for nearly half an hour, watching the green curtain reach across the sky and contract, like the convulsive grasping of a palsied hand.”

“The northern sky, dark over the sea, is mottled with green that spreads like spilt paint, disappears and spreads again.”

What vivid descriptions! As Moss travelled around the island she met various experts in all things Icelandica: troll experts, knitters and storytellers, and was transfixed by the views of the northern lights from their rural homes. In Iceland, anyone not living in Reykjavík is rural, yet some of the homes she visited were indeed as isolated as you can be.

The narrative progressed like an oral travel story and not like a clinical work diary. It was fun to travel with Moss and make discoveries with her, whether they were about the banal or the general psyche of the Icelandic population:

Explaining yourself–as when signalling or indicating when driving. Moss could never steel herself when behind the wheel on Icelandic roads.

I looked forward to the chapter entitled Eyjafjallajökull, the name of the volcano that erupted in 2010. Its ash cloud spread all over northern Europe, disrupting air traffic for six days. Moss talked about the initial rumblings of the volcano and her and Max’s visit to it, half-ashamedly to a “tourist eruption”. Native Icelanders feel trembles and even eruptions as a regular part of life. They would never trek out to see a live volcano; only tourists would do such a thing. The chapter however ended with a longer yet far more interesting first-person account of the evacuation of Heimaey during its overnight eruption in 1973. Thus the title of the chapter was inappropriate. She wrote more about the consequences of the Eyjafjallajökull eruption later in the story when she applied for a teaching job in Singapore yet couldn’t leave Iceland to fly there. She settled for a job in Cornwall instead.

Names for the Sea was full of observations that I myself could have made (and certainly did make, in my own travel blog) about Icelandic scenery, weather, culture and people. I took many notes of passages from the text that were exactly my own experiences as well. Moss kept her diary humorous yet most of all it was real. This was not a comic tale of a bumbling Brit feeling out of her depth clumsily plodding along the lava landscape. You can tell that she would love to come back. Her final line was “I’m still not ready to leave Iceland.” and I know she means it.

I shall be giving a photo presentation documenting my sixteen-day tour around Iceland at the Mississauga Central Library on Tuesday, September 29 from 7:00 to 8:30 p.m. in meeting room CL3. Please call 905.615.3500 extension 3589 to register. Admission is free but registration is required. Come see my photos of volcanoes, waterfalls, glaciers and the most beautiful green scenery on this remarkable island.