When I moved into my house in July 2002 I did not like the blinds that were already in it. The house was new, only occupied for nine months, and I was reluctant to start tearing things out that I didn’t like when I was now burdened with a new mortgage as my main household expense. Other things I didn’t like, like the pedestal sink in the en suite bathroom, would also have to wait before I ripped it out.

Twelve of my fourteen windows had blinds: ten cheapie horizontal dust-collectors and two sets of vertical blinds. I abhorred the horizontal slats since I could never lower them as easily as I had raised them. The slats in some of the blinds did not lie flat and let evil sunlight in when I wanted pitch darkness. Some of the slats were brittle and broke off, leaving thin rectangular gaps. And some of the vertical slats got twisted and would not lie flat when I closed them.

I made up my mind at the end of last year, after I had bought a new bed and sofabed, that in 2019 I would finally buy new blinds. I wanted all fourteen windows covered. Since my en suite bathroom has a long window facing the street I never opened the blinds in that room, not even once. I wanted a set of blinds that opened from the top down to let in light but would not expose oneself to pedestrians as you did your business. I was able to buy a cellular pleated blind for that one room only, while all my other windows have blackout blinds with white on the outside and grey on the inside. My condo rules state that all exterior window coverings must be white (although there are a couple violators of that rule and their orange curtains certainly stand out). The blackout blinds do indeed block out all light, which I like. No more light gaps seeping into my bedroom. 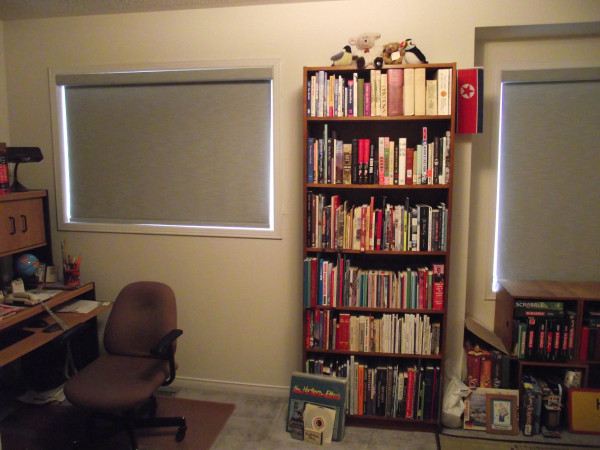 This is my new library. It hardly looks like a library since only one bookcase is in the photo, but four bookcases are against the other walls. The horizontal slat blinds I used to have on the left did not close tightly, and sunlight scalded the spines of the books. Hence my reason for blocking this window for years with a row of bookcases. I was thumbing my nose at Mother Nature while cutting my bookish nose off in the process. 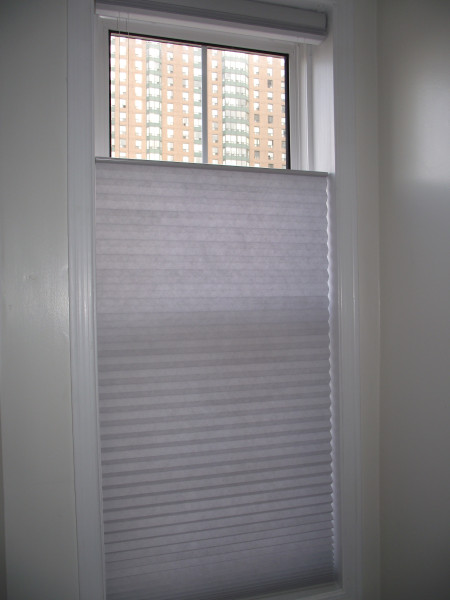 The cellular blind in my en suite which opens from the top down, or from the bottom up, or both at the same time. Finally there is natural light in my little bathroom. This is the only room in the house that has this type of blind. 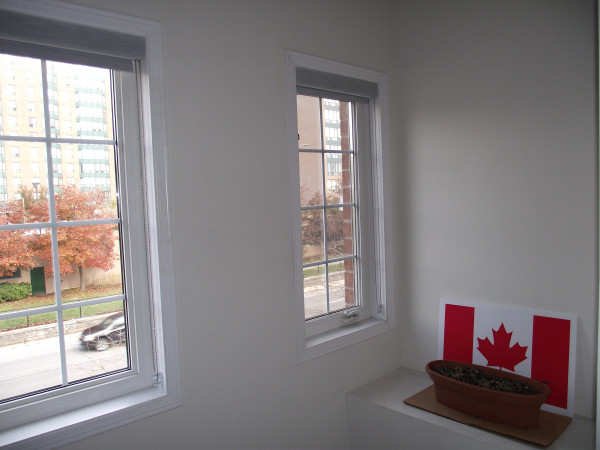 Two blinds on my upstairs landing. These windows never had blinds before. I am growing pansies and they are sprouting. Pansies were my mother’s favourite flower. 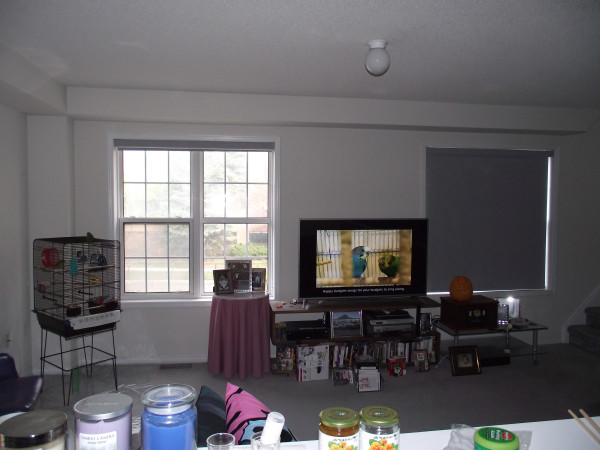 Two blinds in my living room. Mango is atop the cage, attracted to the budgie chirps coming from a YouTube video.