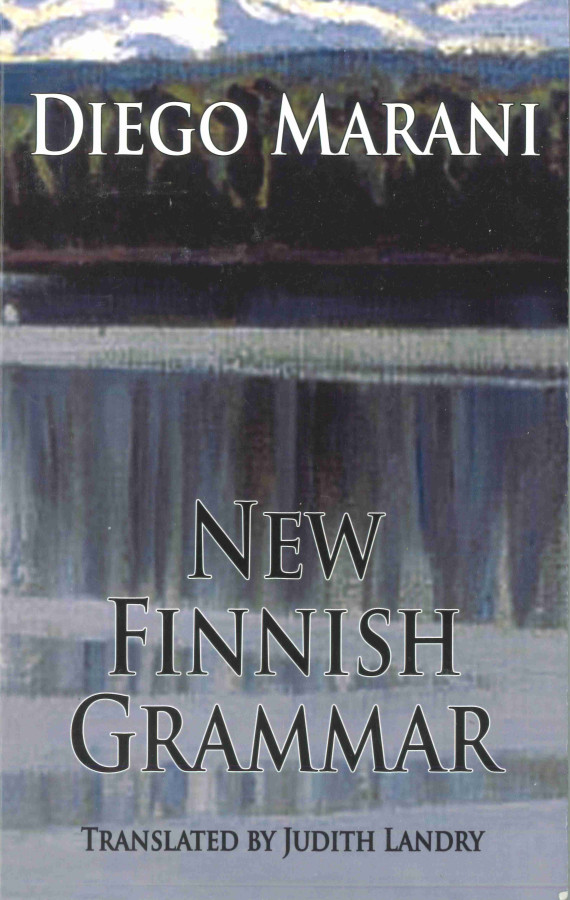 I found New Finnish Grammar in a second-hand bookstore in Helsinki in 2017. I thought it was about a supposed Finnish language reform that I had never heard of before, yet when I read the blurb on the back I discovered that this was a novel translated from the Italian. I was puzzled by the title; I am sure that readers who may very well have been intrigued by the story within would be immediately put off if they discovered the title, versus the contents, first. Browsers of books do not pick up titles like this thinking that they are getting anything other than a grammatical text. However, I felt that the story would explain the title to me and it would all make sense, and now that I have read the novel I can offer no explanation for it. The title had no resonance. Landry did not alter Marani’s original Italian title; in this case I wish she had taken artistic licence to change it. In any case, I loved this novel and have to do a fair bit of my own promotion to distract people from the misleading title and convince them to read the book within.

We are in the middle of World War II and a wounded soldier is found on the shores of Trieste, Italy. He cannot remember who he is or why he is there. The only clues as to his identity are the jacket he is wearing, with the nametag “Sampo Karjalainen” sewn inside, and a handkerchief with the initials S.K. This is a Finnish name, and the doctor who treats him believes the key to uncovering his hidden identity is to return the soldier to Finland.

Sampo embarks on learning (or relearning) the Finnish language with the help of a Lutheran pastor in Helsinki. He hangs out at a local hotel amidst the bustle of wartime journalists, and even contacts random Karjalainens in the telephone directory. However the city of Helsinki is alien to him; his memory is not triggered by anything or anyone he encounters. He does meet several people who are sympathetic to his predicament and they become quite attached to him, but are unable to trigger any memories of his past.

The text was mostly rendered in solid blocks of descriptions and interior monologues. It is the sign of a good writer as well as translator that page after page of solid blocks of text without paragraphs could flow so freely. I raced through these lengthy sections, not needing to see paragraph indentations or quotations to hurry me along. The only times where I felt the story drag were the lessons incorporating the Finnish national epic, the Kalevala. Every Finn knows the Kalevala, and perhaps Sampo could uncover some hidden childhood memory by a rereading of this text.

Landry may have translated the Italian text exactly as it was rendered. I do not wish to get into a testy argument abut the role of the translator’s work versus the intent of the original text, yet within this short novel (187 pages) there were a few moments of head-scratching page-flipping. For one, the doctor who is first assigned to look after Sampo, Petri Friari, himself a Finn, either left his native land for Germany when he was a boy or when he was already in medical school:

“As I was later to learn, he had fled his native land many years earlier, when he was little more than a boy.”

“So Petri Friari, then a young medical student, had left Finland with his mother to seek refuge in Hamburg, to stay with distant German relatives.”

Marani inserted this observation about acquired languages. It refers to Dr. Friari learning German after moving to Hamburg from Finland (either as a boy or as a young man in medical school). I objected to the idea that my quest to speak Finnish–or specifically French–fluently should not include the further step of adopting a Parisian accent. Would Marani prefer I talk French as horribly as Preston Manning? The original was all in italics:

“A learnt language is just a mask, a form of borrowed identity; it should be approached with appropriate aloofness, and its speaker should never yield to the lure of mimicry, renouncing the sounds of his own language to imitate those of another. Anyone who gives in to this temptation is in danger of losing their memory, their past, without receiving another in exchange.“

I wondered about the level of Finnish proficiency of the translator. One minor mistake she made was inserting superfluous definite articles before street names, such as:

“When we reached the Mannerheimintie…”

“…they immediately turned off into the Aleksanterinkatu…”

“We turned into the Bulevardi…”

“…we turned into the Lönrotinkatu.” (The street name should be Lönnrotinkatu).

However before I level criticism at Landry I must ask myself what the original Italian was like. Did Marani include Italian definite articles in the original text? If so, then how would Landry know that it was better to leave them out in English? Try this: in the quoted sentence fragments above, substitute just “Yonge Street” for “Mannerheimintie” (which translates to “Mannerheim Road”) or “Bloor Street” for “Aleksanterinkatu” (which translates to “Alexander Street”) to see how awkward the definite articles sound.

Yet even some English passages raised eyebrows, such as Landry’s translation for opening an envelope:

“…I unstuck the envelope and began to read.”

which was pure awkwardness. Sure, envelopes are sealed with adhesive which is sticky when wet, but no one would open an envelope in English by “unsticking” it.

and she wrote the wrong homophone within this passage:

“In no time I was at the Suurtori, then I was passed the cathedral and found myself knocking at the door…”

I am sure an editor would have caught both mistakes, as any spelling app may not have recognized either error since neither passage contained a misspelling.

These questionable translations aside, I was deeply moved by this novel. From evocative similes like “The windows of the houses looked like bruised eyes” to descriptions of Helsinki that are as accurate today as they were 75 years ago, Marani set the scene that will trap you in a city in the middle of wartime. Days after I finished the novel, I continue to reread the epilogue, where the mystery of Sampo Karjalainen’s identity is revealed. A reread of the prologue is also a good idea. It was so moving to finally discover what happened to Sampo that led him to the shores of Trieste. Marani did not rely on weak literary devices like dreams or deus ex machina to solve this mystery. I am so glad that I found this book in a small Helsinki second-hand shop two years ago. I will be lending it to many people.