Nine Years Under: Coming of Age in an Inner-city Funeral Home 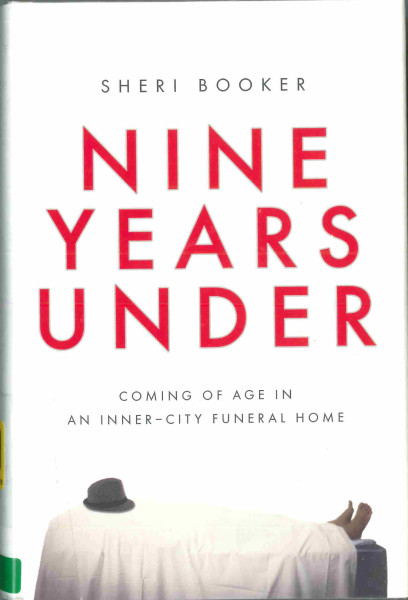 At age fifteen, Sheri Booker got a part-time job at the Albert P. Wylie Funeral Home in Baltimore, Maryland. Nine Years Under: Coming of Age in an Inner-city Funeral Home is a memoir of her time spent there. Booker grew up, so to speak, in a funeral home and her second family were her colleagues. Her girlhood crush was none other than her boss’s son. She wove stories about her job with those that affected her personal life, which created a wholly engaging story underlined by death.

For anyone, especially a teen, a funeral home might be the last place one would ever seek employment. It surely would qualify as one of the creepiest. Booker, however, showed a level of maturity beyond her years in bravely facing her duties. She showed her professionalism early on and without tears, or by using the coping mechanism of uncontrollable laughter in the constant face of death. Finding suitable employees who could cope under intense emotional pressure are hard to find, and the staff of the Wylie Funeral Home made sure that Booker received the appropriate training. When your line of business is dealing with death, the employee turnover rate is high.

Booker’s colleagues embalmed corpses, dressed the bodies, did their hair and makeup and placed the bodies into the caskets. As a door greeter and office worker, though, Booker didn’t come into close contact with the casket occupants. She even kept her distance in the viewing rooms as bodies were laid to rest for the mourners. Yet when your place of employment is a funeral home, pretty soon you’re going to come into intimate contact with a corpse. Booker was frightened of this inevitability, and one of her colleagues carefully and respectfully eased her way towards a body laid out to rest at a viewing:

“‘Are you scared of dead bodies?’ She laughed.
‘No,’ I lied.
‘Come on.’ She motioned for me to follow her.
I wanted to show Marlo that I was tough, since she looked like the type of woman who would clock a mugger before he even had the chance to grab her purse. She led me down the long hallway back to the chapel and then guided me inside to the casket. The woman was wrapped in a shroud, and pearl beads hugged her neckline. She lay with her face pointing up toward the ceiling, and her eyes were sealed shut. Her makeup was flawless and her arms rested across her waist as her hands held a bouquet of flowers.
Marlo walked up to the woman and placed her right hand on the woman’s hand.
‘See?’ she said while caressing the inert hand. I watched carefully to make sure that the woman didn’t move.
‘Touch her,’ she said firmly.
I looked up at Marlo’s stern face and then turned to the woman in the casket. I wanted to whisper an apology in her ear, but instead I extended my hand toward her.
I hesitated at first.
‘Go on, feel her face.’ Marlo urged me to get it over with.”

“That wasn’t so bad, I thought. Maybe it was Marlo’s presence, but somehow I felt safe.”

Marlo, without showing any disrespect towards the deceased, helped Booker ease her way in and alleviate her fears.

Booker worked behind the scenes and revealed many secrets from the funeral home industry, from stuffing clothes to making the bodies feel fuller to filling in visible face wounds caused by gunshots. Since hardly anyone smiles at the precise moment of death:

“I would later learn that death smiles are man-made, a minor technique of skin adjustment.”

Mr. Wylie would say to his staff countless times throughout Nine Years Under, “you only have one chance to get it right”. The work of the staff makeup artist seemed to cause the greatest shock to grieving families, as sometimes her work was a little too good to be true:

“But some people couldn’t handle their loved ones looking too much like they’d looked when they were alive; it was as though they needed the body to look fake after death for the whole thing to actually feel real. Mr. Wylie would do his best to give them what they wanted to see.”

“When his daughter came in, she stood before the casket for a few moments, inspecting everything, and then she walked around and read the notes on the cards before circling back and pausing again in front of the casket. Then she burst into tears. ‘He doesn’t look dead enough. I don’t like it. He looks too healthy.'”

Everyone working at the Wylie Funeral Home had to have an incredible amount of sensitivity in dealing with grief in all of its manifestations. For Booker to work on the front lines answering phones, dealing with all kinds of callers in their bereaved, silent, distracted, or even hysterical states of mind, shows she was well suited for the job:

“The subject was that sensitive. I had no time to test pens or search beneath the clutter for a message pad. The world stood still when the voice of grief was on the other end of the phone. You forced yourself to memorize names and numbers if you had to. But most important, you reached deep down inside to muster up every bit of compassion you could.
“Answering the phone was an art, a technique that I quickly mastered. This wasn’t so for many of the women Mr. Wylie hired. They easily found themselves standing in the unemployment line because they couldn’t perfect the death call.”

Sometimes tears could not help but fall. At moments like this, Mr. Wylie offered the following advice:

There was almost inevitably a lighter side of working in a funeral home, and Booker provided plenty of examples of the comical goings-on that sometimes seemed to take place when you least expected them. Widows sparred with mistresses over their deceased husbands or boyfriends. Staff received conflicting information on how to dress the deceased when he was born male but lived as a transgendered woman. Booker even saw the humour in her own trepidations when she stepped into the embalming room for the first time. The funniest incident of all was the mixup of two deceased women and their families’ reactions to seeing the wrong woman laid out in each casket. That the families couldn’t even recognize their own mothers when the bodies were switched back added another wacky element to the story that even when you make things right, you can’t win all the time.

Near the end of her time at the funeral home, Booker made some poignant observations. The services she and her colleagues provided to people at their most vulnerable made them appear invaluable in the eyes of the bereaved:

“There’s nothing like entrusting your loved one to a friend, or at least someone who could pretend to be your friend. It took me years to realize that ninety percent of the people who said they knew Mr. Wylie personally did not really have a relationship with him at all.”

That they provided this level of comfort to their clients shows that they had performed a job well done. Her concluding revelations felt as though she left the funeral home more vulnerable than strengthened:

“When you spend almost a decade working in funeral service, there are some things you learn to forget. Tears were the first thing I sacrificed to become a part of the business. But I mistook control over my tears for control over myself.
“As I reached deep down to find the words to tell this story, I found the residue of emotions that I had buried within myself, feelings that I couldn’t articulate at the time, memories that I camouflaged in the spongiest parts of my brain. And now that I’m older, they resurface.”

In spite of a general perception of having a depressing subject matter, the book was indeed a pleasure to read. I was most impressed by the level of writing in Nine Years Under, and I see great promise for Booker as a writer of nonfiction as well as fiction. There aren’t that many books by young authors where I felt dazzled by their choice of words and range of emotions. I often told myself as I finished a chapter “Damn, this is a good book”, knowing that I was in the midst of a great new talent. I have already bookmarked Booker’s website to keep up-to-date with her career and any personal appearances.