Niue: A History of the Island 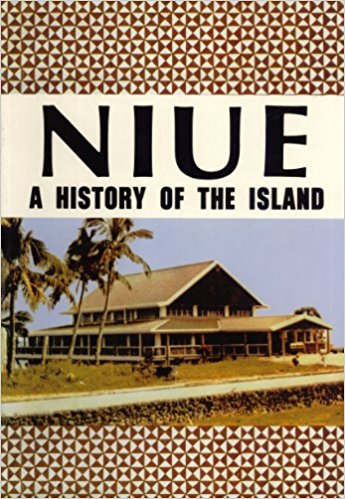 Niue: A History of the Island is a short history of the south Pacific island, divided into eight chapters sharing twelve different authors. The book is a diglot, with the first half written in Niuean, and the second half, from pages 83 to 139 in English. A photo spread in colour and black-and-white separated the two sections. A Niuean glossary and lengthy bibliography ended the book.

Niue is an isolated island like Tristan da Cunha. On my trip to Tristan last year the islanders were stricken by a flu epidemic, worse than it was when I first visited the island in 2013. The infrequent ships bring not only passengers but also diseases. Even if the passengers show no signs of any illnesses, they may nonetheless be carrying a disease which their stronger immune systems are able to fight off. Throughout its history the Niuean population has suffered from ship-borne epidemics which naturally made the islanders wary of strangers. When Captain Cook arrived at Niue in 1744 he was given a hostile reception. He named the island “Savage Island” in response. The Niueans may have been reluctant to let him and his crew land, fearing the diseases Cook’s ship may have been carrying.

This book was printed in Fiji in a tiny font that covered the pages of this oversize paperback. Minimal spacing between the lines and narrow margins economized the page count which no doubt would have expanded to twice the length had frugality in paper content not been an issue. I did not mind the tiny text brickwork but found the frequent changes in ink tone, from boldness to faint grey, often alternating from line to line, to be a hindrance to a smooth reading experience.

One hundred years ago Niue played a part in WWI when, at the suggestion of the Resident commissioner, 150 Niueans volunteered for training into the New Zealand army. These soldiers saw service in Egypt and France.

Niue is an associated state of New Zealand, which offers it more autonomy than being a dependency. With a current population of around 1200 (a third of what it was at the time of the book’s publication in 1982) the island is rather fond of its government status. From the missionaries who came to the island in the mid-nineteenth century to the current political situation with New Zealand, Niueans have liked having others take control. This sentiment could have its roots in history, since the northern and southern parts of the island often fought against each other. It took the missionaries and colonial rule to establish peace on the island. In turn unique native traditions have disappeared, but this cannot be solely the fault of New Zealand, for Tongan and Samoan influence had been affecting Niue for centuries:

“Because of their very small numbers, coupled with the benevolent nature of New Zealand policy over the years, Niueans have responded without resistance to the permeation into their life-style of New Zealand’s own ways and values. If fact they have come to accept and desire as an integral part of their modern life-style, practically everything with which New Zealand life is associated.”

Oral tradition has kept local myths alive and the book contains stories about the island name and how–and this is a surprise–coconuts were introduced to Niue. They are not indigenous to the island, apparently.

I was happy to pick up a Niuean language dictionary at Schoenhof’s four years ago. In my original blog post I referred to a postcard I got from Niue. I have scanned its front and a portion of the message side below: 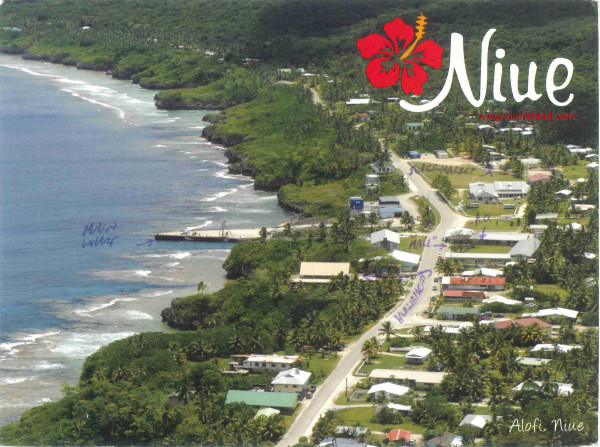