No Home for Us Here: The Mass Annihilation of the Finnish Border-Hoppers in the Urals in 1938 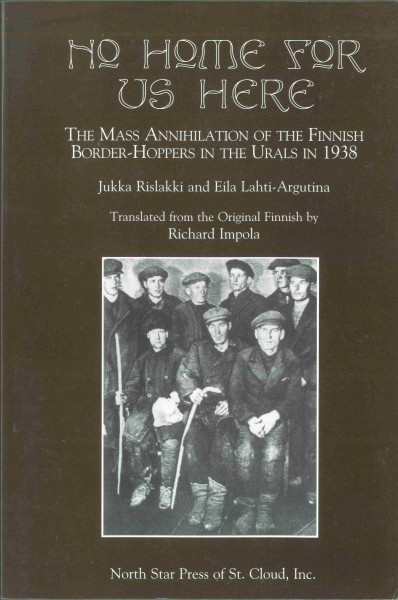 Finland celebrates its centennial of independence this year, and one of my reading projects for 2017 is to read all of the books I have about Finland that are still unread. There are fewer such books in my personal library than I had thought, as I read most of them before I started writing book reviews in 2010, and I did read a few about the Åland Islands since then. I bought No Home for Us Here: The Mass Annihilation of the Finnish Border-Hoppers in the Urals in 1938 by Jukka Rislakki and Eila Lahti-Argutina (translated by Richard Impola) at Akateeminen Kirjakauppa during a trip to Finland about twelve or thirteen years ago. The story of the border-hoppers is a tragedy of colossal scope. Thousands of Finns died or were executed by Stalinist paranoia and the urge to purge all that is foreign from Russian soil. It was not easy to read No Home for Us Here. This is not a remark about the excellent translation, but rather about the state of life the Finns were subjected to after they escaped to the Soviet Union. Not once could you say that the Finns caught a break; their lives in the USSR were far worse than anything they had to struggle through in Depression-era Finland.

In the 1930’s, Finland, like North America, was suffering through the Depression, and Finns believed that the grass was greener across the border in the Soviet Union. The propaganda making its way into Finland was irresistible to those who saw no future in their own homeland. The USSR offered employment for everyone, guaranteed food and housing and everything else was provided by the state. How could an impoverished Finnish family say no to what appeared to be an easy way out? One of the Finns revealed in a surviving confession:

“In 1932 life in Finland became difficult; there was no steady employment for husbands and sons. For that reason, the whole family decided to go to the Soviet Union, where we heard on the radio that there was no unemployment and workers were needed. Selling our property, a house, cow, furniture, and different things, we went from Kotka to the Soviet Union on June 6 of this year.”

The only glitch was that a trip to the Soviet Union would have to be an illegal one, hence the term for these economic migrants, the “Finnish border-hoppers”. The Soviet Union under Stalin was a paranoid self-cannibalizing state, and all foreigners were suspect. The Finns were not regarded with open arms as desperate but future converts to the Soviet system, but rather as secret agents, spies and saboteurs. They were never integrated into Soviet society in spite of some of them receiving Soviet passports. They were forced to live in the gulags, labour camps or other penal institutions. Never given the chance to settle permanently, the border-hoppers were herded around Russia by rail in cattle cars or forced to walk unbearable distances to Siberian camps. Mass upheavals could happen at any time, and testimonials showed that the Finns got used to it.

Finding out the exact number of Finnish migrants was not easy. This book was first published in 1997, and after the Soviet Union fell the authors found more archives open to them. They were able to confirm the fates of many people whose families left back in Finland never knew about. Unfortunately, the authors could not find any sources to corroborate the total number of Finns who fled across the border:

“It is difficult to determine the exact number of border-hoppers, for the only ones who are recorded are those who, for various reasons, had later made contact with Finnish officials. Researchers have come to the conclusion that there were about 15,000 of them, without taking the American Finns into account…But the border-hoppers from Ural, the area that we know best, appear to be missing from [the] statistics.”

Once the Finns had crossed the border, however, they were treated dismally and were forced to live in concentration camp conditions. Families had to sell all of their possessions, even their own clothes, for food. It was painful reading to learn about the sleeping conditions, the infestation of lice, starvation rations and child mortality. There was no going back home because in Stalin’s Russia, no one could. The authorities taunted the Finns with rumours or promises of being permitted to return home, yet nothing always came of these empty words. Getting a passport and then permission to leave was one thing, but being allowed to go was another. The authors told about many families, whose personal files are still intact in the former Soviet archives, who had unused passports. Whatever became of these people? Were they made to stay in Russia? Were they forcibly moved, yet again? Or were they executed? Years of imprisonment did not wear the Finns down as I would have thought. Call it Finnish sisu. Yet survivor testimonials revealed a fortitude and typical Finnish stoicism that enabled them to stick to their deplorable conditions and eke out survival. A common longing for home was about food:

“The state of mind among the Finns is gloomy and sullen, and almost the only subject of conversation is memories of what they used to eat in Finland. Escapes are frequent, although mainly among the Poles. The Finns seem to be waiting for the end of summer when berries are ripe and it will be easier to succeed.”

No Home for Us Here was supplemented with dozens of photos, inserted in the places where the authors wrote about the subjects. In almost all of the cases, the people in the photos would later perish while in Russia. Death came by disease, starvation or by being worked to death. The authors included numerous photos of funerals for children. It was heartbreaking to see yet another shot of every family member leaning over a deceased child lying in a coffin. As Stalinist paranoia pervaded the nation like a noxious miasma, all Finns were suspected of being part of an underground network of spies sent in to undermine the Communist state. Finns were interrogated, tortured and executed. Men and women were both shot for any number of trumped-up reasons of having committed a capital crime. The mass paranoia infected even the false security among the interrogators; such was the Stalinist regime that no one was immune to his purges. The authorities eventually came after the interrogators, and those officials in charge of purging the Finns lost their lives by an executioner’s bullet as well. Stalin’s reign was one of pure terror and he kept everyone, even among his innermost circle, on tenterhooks. The false charges against the Finns may have been excuses to implement the following order:

“In March 1935 the Leningrad and Karelia NKVD [1] authorities had received from Genrich Jagoda top secret Order No. 55709 for an operation whose chief objective was ‘to purge the Leningrad area and Karelia of kulaks and anti-Soviet elements.’ A twenty-two-kilometer-wide border zone was to be cleansed immediately and all ‘extraneous class elements’ deported from Petroskoi. In the second phase a 100-kilometer-wide zone was to be cleared, which meant the deportation of the Ingrian Finnish population to Ural, Siberia, and elsewhere.”

Thus this wide zone was completely de-Fennocized, not only of Finns but also their linguistic cousins the Karelians and Ingrians. When I travelled from Finland to Leningrad via Vaalimaa in 1999 there was no sign of any Russian settlements near the Finnish border. Everyone had been purged or forcibly moved in mass deportations to create a wide-scale no-man’s-land. Russification repopulated the outskirts of this zone but when you first enter Russia from Finland, even in 1999, for kilometres you see not a soul nor a domestic structure.

I had known a little bit about these mass Finnish deportations from my prior studies of Finnish history, yet was not aware of the border-hoppers and their tragic fate. As the authors state on the back cover: “Their stories need to be told.”

[1] The abbreviation for the People’s Commissariat for Internal Affairs