No Nation is an Island: Language, Culture, and National Identity in the Faroe Islands 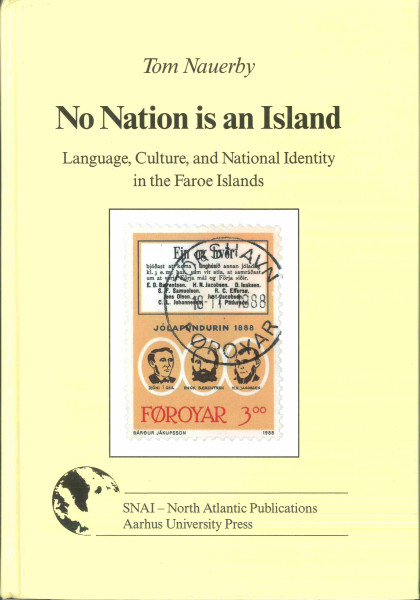 I came across No Nation is an Island: Language, Culture, and National Identity in the Faroe Islands by Tom Nauerby when I visited the Tórshavn city library in 2003. It was published in 1996, in English, yet was not for sale on the islands. I ordered a copy when I returned home. It however sat unread on my bookshelf for the past fifteen years…until now. I will be returning to the Faroes in July, and wanted to read all the books I have about the islands that are still unread. This is the fourth book in my Faroes reading project.

No Nation is an Island is a dense academic read, exploring various concepts of what defines national identity. The book was a s-l-o-w read, and one that I found immediately frustrating as before I even started the first chapter, Nauerby went overboard discussing nationhood from a historical and philosophical perspective. I understand the necessity for providing a formal definition of nationhood as that is one of the premises for the book, but instead of a few pages, Nauerby devoted twenty-five. I wanted to read about the Faroe Islands, not plod through so much political theory. My interest was sustained even though I could only get through ten pages in an hour.

Three of its four chapters were devoted to language as a marker of national identity. Language, thus, took up the majority of this book. National identity was strengthened in part by the creation of a formal Faroese written language in the mid-nineteenth century. There were two camps vying for language supremacy: the practical and phonetic approach, which transcribed Faroese as it was spoken, and the etymological approach, “which, while being undeniably more difficult to learn, [had] on the other hand a number of symbolic advantages well suited to the ambitions of the nationalist Faroese”.

The Faroese language is closely related to Icelandic as both share Norse roots. The language however had been heavily influenced by Danish as the Faroe Islands are still an autonomous part of the kingdom of Denmark. The adoption of a formal written Faroese language introduced the debate as to what to do with all the Danish-influenced words. Should the new written language include them? Or should the new language be an idealized representation of what written Faroese should be?

Thus the new written language was created with the specific intention of de-Danicization. New words were created out of Norse or Icelandic roots and Danish loanwords discarded. Thus an etymological solution was proposed for the new written language. Language scholars however can invent all the new Faroese terms they want; it’s changing how people talk that really shows how a language is being used. The introduction of Icelandic-influenced terms for everyday words that originally had Danish influences gave rise to the term “paper words”: words that no one actually spoke, but encountered only in print. Nauerby stated that with the decline of Danish (although it is still official and is taught in schools) the foreign language influence to have taken its place is the international invader, English. He included some photos of Faroese business establishments with English names. These are businesses that are not geared towards tourists. I encountered this also in Finland and in Switzerland. English gives a product or a business name a trendy, current cachet that seems internationally hip, whereas labelling or signage in a national language might seem parochial or even old-fashioned. The Faroese might object to seeing Danish everywhere but wouldn’t blink an eye over a sudden profusion of English.

As is often the case with academic reads, the text was overrun with repetition. What could have been stated only once, or even twice, was repeated countless times. It was tiring to reread the same paragraphs. Thus many passages seemed to say the same thing but used different words. Two passages I wanted to cite about the new written language do this:

“The linguistic struggle coincided in the case of the Faroes with the nationalist struggle for a greater degree of political autonomy with regards to Denmark. Down through history linguistic and political recognition remained closely tied. In the period immediately after 1821, when the Faroes were incorporated as a county of the Danish kingdom, Faroese was officially considered by the Danes to be a Danish dialect, not gaining official recognition as the nation’s principal language until present-day home rule legislation was passed in 1948.”

“The language revival marks a turning-point between a passively defined position, where Faroese is interpreted as a dialect of Danish; to an active, defining role, with the nationally-conscious Faroese seeking to rehabilitate Faroese as a recognised national language. The basis for this change of status of the Faroese language was laid down with the development of a Faroese written language in the middle of the last century.”

The written language strengthened the case for Faroese as its own independent language not to be brushed aside as a dialect of Danish. The de-Danicization of the written form ensured this.

The final chapter dealt with the pilot whale hunt, known as the grind (rhymes with print), and how this tradition forms part of national character. This is a sensitive topic among the Faroese, and it is a tradition which I support. The Faroese unfortunately have had thirty-plus years of dealing with bleeding hearts who want to deprive them of their own culture because the thought of whale blood makes foreigners weep. Where is Tanya Tagaq when you need her? She’d tell the Greenpeace nuts where to go. When the topic of the grind came up during my time in the Faroes in 2003, I could feel the tension in the room. My new Faroese friends were not prepared to hear my support for this tradition. I was soon shaking hands all around the room and had made friends for life.

I could only get through ten pages in an hour in the language chapters, but raced through grind. The overall reading experience was not so slow that I ever fell asleep. I have remarked on this in book reviews before: if your work is so boring that I doze off while reading it, I will write about it. 178 pages of text followed by twenty pages of endnotes meant that I was constantly flipping to the back. The endnotes were required reading and not mere bibliographic citations. Nauerby provided a bibliography of eighteen pages so there are more books I will be looking for in Faroese or on-line bookstores.