I am back in Helsinki now after spending two days in Tampere. Thus marks my eighth trip to Finland. The last time I was here was in 2010 and I came with Mark. It was such a pleasure to show him around Helsinki. Now I am on an eighteen-day visit and I will see cities that I have never seen before. You’d think that after seven previous visits I would have visited Tampere. I do not watch “The Amazing Race”, but I got a call years ago (I forget from whom) for me to turn on my TV immediately because the show was being shot from Tampere. I remember laughing at the racers who would ask for help in finding “Tam-PEER”.

The train from Helsinki is just under two hours, and I stayed at the Hostelling International Dream Hostel. At first I rolled my eyes at the name: what kind of dream will this hostel be? A nightmare? How wrong could I be? The hostel was like a top-rated hotel. Clean and still smelling of wood. My room, the only fault was that it was windowless, came with hidden extras like coffee pods and a Moomin sucker, and blue accents in the white (and pale wood) bathroom, Finland’s national colours. 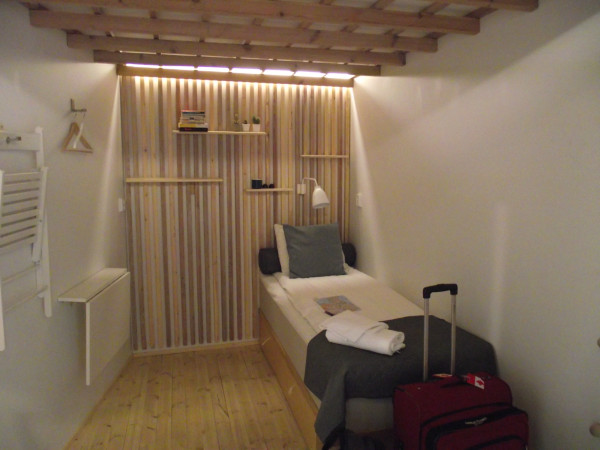 My laptop was giving me trouble on my first night in Finland. Now I cannot sleep on planes, and since alcohol makes me sleepy, I asked for two white wines on my Lufthansa flight to Helsinki. I think it helped, as I know I dozed off for a little while, but I was still a zombie when I deplaned. Yet instead of enjoying a long lie-in when I finally got to my hostel bed, I stayed up with my darn laptop, as the Internet connection kept giving out. I had composed a mail to friends telling them that I had arrived, and I was writing a long personal mail to Mark about my journey and first impressions of all the new Helsinki architecture. (One thing I just discovered today: Keskuskatu, between Aleksi and Pohjoisesplanadi, is now pedestrian-only.) I was determined to write and send it before going to bed. I blamed the hostel’s weak wireless connection. Turns out, it wasn’t the connection, but my own laptop that was the matter. When I arrived in Tampere on Saturday night, my laptop worked fine. I even managed to buy train tickets to Ekenäs. And then my wireless connection died. No more Internet. What happened? You’re asking me? How should I know?

Sunday morning I had a daylong date with Laura, who is the second cousin of my late ex. I dated Pauli from 1996-2000, and although we parted I still kept, and keep, in touch with his family. When I planned my trip to Tampere, I told Pauli’s sister Kirsti, because I wanted to visit her aunt Kerttu. I first met Kerttu on my first visit to Finland in 1999. We met in the town of Kannonkoski. Kerttu was 83 then and she is just two months shy of 100 now. Kirsti arranged for her second cousin Laura to pick me up next to the Dream Hostel. I met Laura’s mother Anita, Kirsti and Pauli’s first cousin, and we had breakfast at Anita’s house. Anita, by the way, is the daughter of Kerttu’s brother, Jaakko, and Jaakko and Kerttu are siblings to Kirsti and Pauli’s mother Eila. I was delighted to meet Kerttu again. She speaks only Finnish and I had to speak loudly, but we were able to converse. I brought a blow-up photocopy of a photo I took of Kerttu seventeen years ago. Kerttu looks very healthy for almost 100. 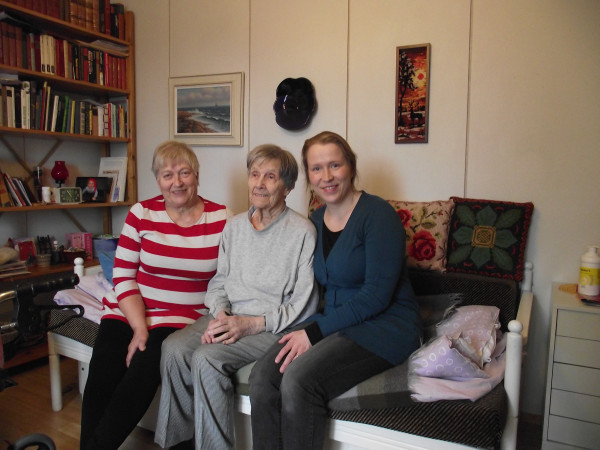 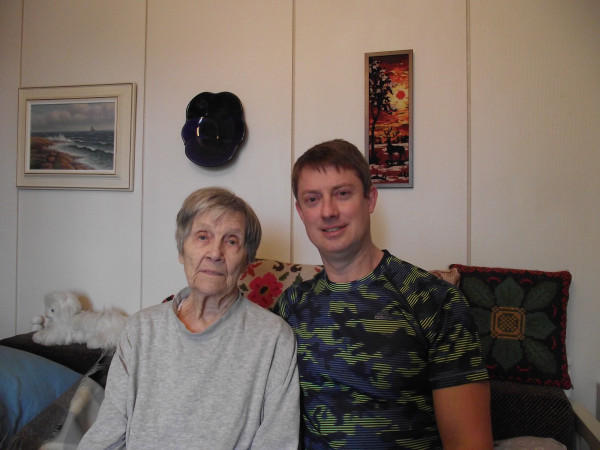 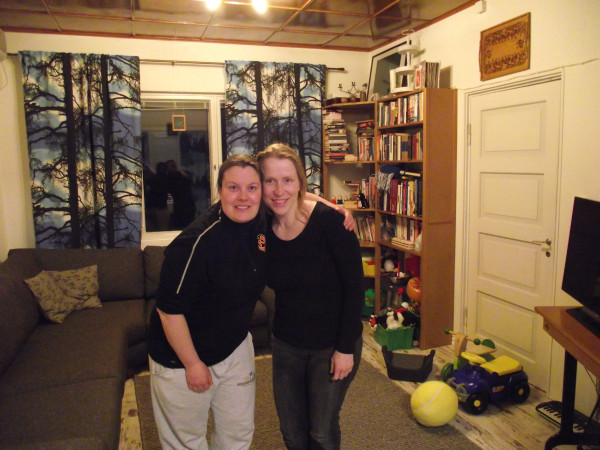 Laura’s wife Katja was at home taking care of their year-and-a-half-old son Samu, who had a cold. Katja coaches salibandy and we went to a match against a Helsinki team. Unfortunately Katja’s team lost, 9-4. Coincidentally, the last time I saw a salibandy game was in Sweden (where they call it innebandy) in 1999 during the trip I took with Pauli, Eila and Eila’s choir. We watched a relative (I think) of their family (whose surname was Kelloniemi) play in an outdoor match.

Laura turned on the sauna for me and I enjoyed a genuine sauna with the stove, rocks and ladle, not at all like the tepid electric sauna at the Y.

I stayed with Laura and Katja from 8:30 till 10 p.m. It was a day full of Finnish conversation and visiting new friends and old, who are very much like family.

Now that I am back in Helsinki with a working laptop, I hope I will sleep easier. I have not had a good sleep since I got here. For after my laptop died, I couldn’t sleep. No matter how late it was, all I could think of was my laptop. I barely know how to turn the thing on, so when it doesn’t work, I fear the worst. Laura convinced me that it wasn’t as bad as I thought, and she helped me find some computer repair shops that were close to my hostel. I could take it in this morning and see what they said. Even though I was in a calmer state of mind after my day with Laura and after hearing her own diagnosis about my computer, I still could not sleep Sunday night. Maybe the narrowness of the Dream Hostel bed had something to do with it. Sure, I was still obsessing over my kaputt laptop, but I kept feeling I was going to roll out of bed. Now that it is past 1 a.m. on literally Tuesday in Finland (Finland is seven hours ahead of EST) I hope I can get to sleep easily. No need to get up early to partake in breakfast because this particular hostel does not provide it free for its guests. My breakfast food is in my own locked cubbyhole in the shared kitchen. Maybe I will get some needed sleep and wake up whenever I wake up. 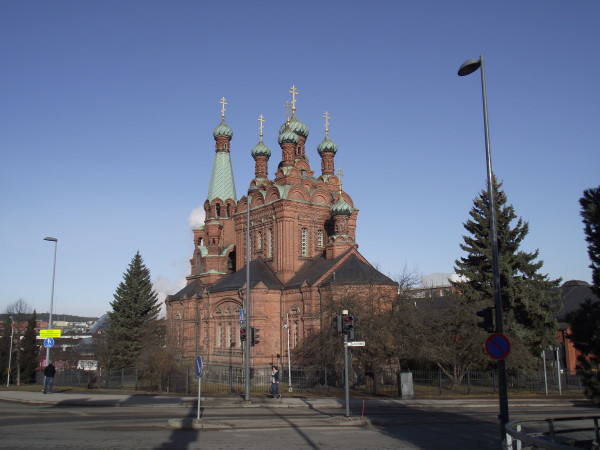 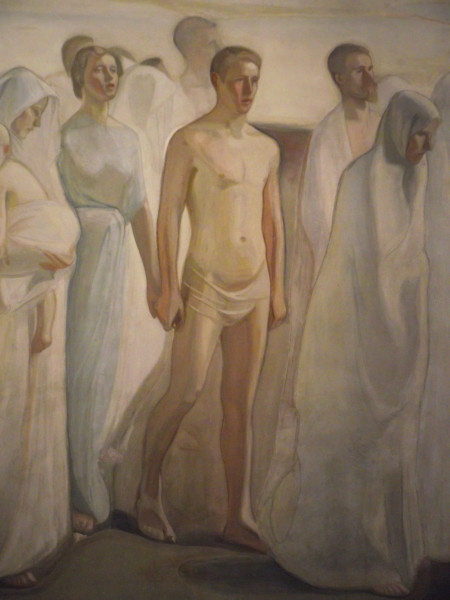 Sexy fresco in the cathedral ( = tuomiokirkko) Who’d like to date the blond bearded new Finnish Bachelor?