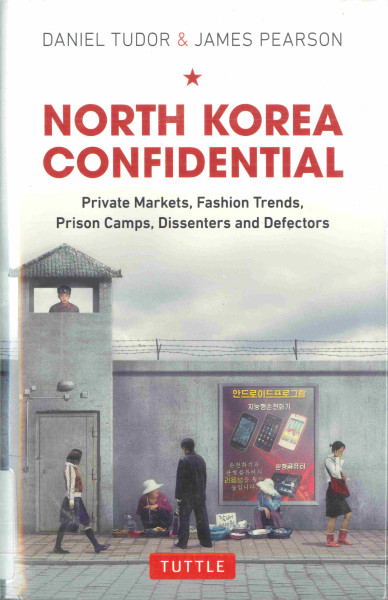 North Korea Confidential: Private Markets, Fashion Trends, Prison Camps, Dissenters and Defectors by Daniel Tudor & James Pearson was a slight book of 179 pages from 2015. The authors covered topics such as the black and grey market system; leisure time; crime and punishment; fashion and trends; and communication. They also dealt with less tangible topics such as social divisions within the country; who is really in charge and if the country is headed for collapse. All of these topics are saturated with syrupy melodrama in the sensational mainstream press, yet Tudor and Pearson relied on their own contacts and backed up their claims to the best of their ability (knowing fully well that one cannot always check one’s sources when quoting statistics for North Korean labour camp prison populations, for example).

North Korea Confidential was a small-format hardcover with generous footnotes and supplemented with a lengthy insert of colour photos. I was impressed by the technological capabilities made available to most North Koreans–for a price, of course. The authors emphasized over and over how grease, used on the palms of officials, is the new lubricant running the country. The fact that bribery is now the North Korean mode de vie was made over and over again throughout this slight book. The authors always came back to the fact that if you wanted something badly enough, or if you got in trouble with the authorities, it was nothing that a little–or big–bribe couldn’t fix.

How did the situation turn so corrupt? While there had always been a degree of shady under-the-table dealings throughout the Kims’ regimes, all hell broke loose in the mid-nineties:

“The main cause of North Korea’s recent social change is actually a tragic one: the famine of the mid 1990s, in which at least several hundred thousand people perished. The famine greatly weakened the bond between the state and the people, forcing the average North Korean to fend for him or herself.”

“As with much social change in North Korea, the mid-1990s famine can be considered a turning point. The collapse of the Public Distribution System made people more independent, and more ready to ignore the government’s rules.”

Starving people did anything they could to survive, and if thievery filled their stomachs, they were willing to risk the consequences. Once the population in the northern provinces–the area hit hardest by the famine–realized that there were no consequences, then submission to authority figures diminished.

These above statements were reworded many times in the text; it was tiring to read the same excuse for the rampant state of corruption. It was the famine, alright already!