Notes from a Small Island Notes from a Small Island by Bill Bryson was a recent Christmas gift. Published in 1995, it is a travel diary of the author’s trip throughout Great Britain. Bryson ventured from Dover to Dunnet Head by all means of public transportation. Only in Oxfordshire and at the end of his trip, when he visited the northernmost point of Scotland, did he find that he needed to rent a car. Above all he covered countless miles on foot, sweating up and down hills and getting soaked to the skin on more occasions than I’d have put up with. I have read Bryson’s work long before I started to write book reviews (The Mother Tongue: English and How It Got That Way) and enjoy his writing style. It is an oral style and I can picture the author and me sitting in a café while he tells me his impressions of the place we’re at, with hushed asides as he covers his mouth to tell me something not so nice about the people at the next table. As I read this at home I laughed out loud I don’t know how many times and had there not been a state of coronavirus self-distancing I surely would have burst into titters several times while reading this on public transit.

I can identify with Bryson in that I do not rely on a car to travel. I do not have a driver’s licence, so I must find my way around all the places I visit either by public transportation or my own power (walking or biking). In 1995 Bryson would not have had the benefit of GPS and thus armed himself with guidebooks and maps. He often had to retrace his steps when planned routes turned out leading nowhere yet just as often he made lemonade out of his navigational lemons and made new discoveries when paths didn’t lead where he thought they would. He also had many spur-of-the-moment changes of mind, where the sudden sight of a destination sign on a bus or a train platform inspired him to drop his plans and go off on a whim.

Bryson has a gifted imagination for description, and my notes were crowded with page numbers showing his best similes and comparisons:

“The man nodded a good-morning as I drew level. ‘Might turn out nice,’ he announced, gazing hopefully at a sky that looked like a pile of wet towels.”

“The colonels were all shortish, round men with tweedy jackets, well-slicked silvery hair, an outwardly gruff manner that concealed within a heart of flint, and, when they walked, a rakish limp. Their wives, lavishly rouged and powdered, looked as if they had just come from a coffin fitting.”

“We followed a coastal route past broad estuaries and craggy hills beside the grey, flat expanse of Cardigan Bay. The towns along the way all had names that sounded like a cat bringing up a hairball: Llywyngwril, Morfa Mawddach, Llandecwyn, Dyffryn Ardudwy.”

“It was a wonderful, spacious house, the kind you could imagine riding a bicycle around in…”

Small Island deserves a five-star review, but nevertheless there were two minor criticisms that only a merciless nitpick like me would make. While I wouldn’t have expected the book to have an index, I wish at least its chapters indicated the places Bryson visited. Instead, the chapters were merely numbered. It therefore made it difficult to find the destinations he visited in the text. Bryson also heaped praise on his travelling companion, friend and artist David Cook:

“Thus it was that on the third morning I picked up my good friend and neighbour, the kindly and gifted artist David Cook–it is his painting that graces the jacket of this book–and went with him for a day’s walk through Saltaire and Bingley, his native turf.”

However I could tell simply by looking at the cover that there was no such painting, unless Bryson was referring to the wobbly phone box and a quick check of the cover illustrations credited that to someone else. Thus I had to look for the original cover and in order to give Cook his due credit I include it here: 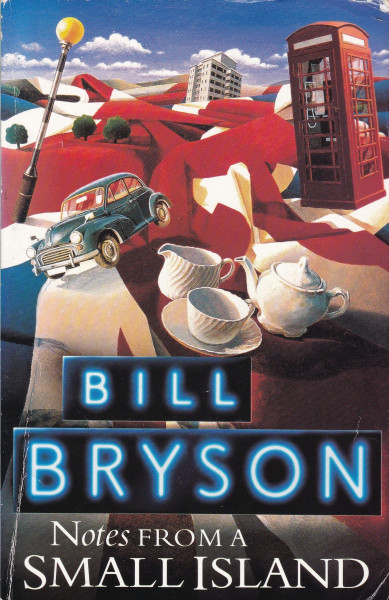 My notes were full of passages that elicited laughter and continue to do so upon numerous rereads. I list the rest of them here, in fond memory of a read that I will definitely share with others. I plan to circulate this book among friends with the note attached, “Must Read”:

“As a result, we were in Newquay in time for breakfast and had to wait around for seven hours before the holiday park would let us have one of their wretched chalets. And the worst of it was that I’d only agreed to go there because I thought the town was called Nookie and I wanted to stock up on postcards.”

I would have gone there for the very same reason. I even travel to places in order to get a certain postmark cancellation on the postcards I send.

“I had an amble through Soho and Leicester Square, spent a little time in the bookshops on Charing Cross Road rearranging books to my advantage…”

The rascal, checking for his own books in the bookstores he visited. He also generously praised the stores that featured his books in their own displays.

“The menu now was richly endowed with ten-guinea words that you wouldn’t have seen on a menu ten years ago–‘noisettes,’ ‘tartare,’ ‘duxelle,’ ‘coulis,’ ‘timbale’–and written in a curious inflated language with eccentric capitalizations. I had, and I quote, ‘Fanned Galia Melon and Cumbrian Air Dried Ham served with a Mixed leaf Salad’ followed by ‘Fillet Steak served with a crushed Black Peppercorn Sauce flamed in Brandy and finished with Cream,’ which together were nearly as pleasurable to read as to eat.
“I was greatly taken with this new way of talking and derived considerable pleasure from speaking it to the waiter. I asked him for a lustre of water freshly drawn from the house tap and presented au nature in a cylinder of glass, and when he came round with the bread rolls I entreated him to present me a tonged rondel of blanched wheat oven baked and masked in a poppy-seed coating. I was just getting warmed up to this and about to ask for a fanned lip coverlet, freshly laundered and scented with a delicate hint of Omo, to replace the one that had slipped from my lap and now lay recumbent on the horizontal walking surface anterior to my feet when he handed me a card that said ‘Sweets Menu’ and I realized that we were back in the no-nonsense world of English.
“It’s a funny thing about English diners. They’ll let you dazzle them with piddly duxelles of this and fussy little noisettes of that, but don’t fuck with their puddings, which is my thinking exactly.”

While acquainting himself with the car he rented in Oxfordshire:

“This car had the usual array of switches and toggles, each illustrated with a symbol designed to confound. Really now, what is one to make of a switch labelled |Ø|? How can anyone be expected to work out that a rectangle that looks like a television set with poor reception indicates the rear window heater? In the middle of this dashboard were two circular dials of equal size. One clearly indicated speed, but the other totally mystified me. It had two pointers on it, one of which advanced very slowly and the other of which didn’t appear to move at all. I looked at it for ages before it finally dawned on me–this is true–that it was a clock.”

“I made a cup of coffee and, while the kettle boiled, changed into dry clothes, then sat on the edge of the bed with a coffee and a rich tea biscuit, and watched a soap opera on television called Pobol Y Cwm, which I enjoyed very much. I had no idea what was going on, of course, but I can say with some confidence that it had better acting, and certainly better production values, than any programme ever made in, say, Sweden or Norway–or Australia come to that. At least the walls didn’t wobble when someone shut a door. It was an odd experience watching people who existed in a recognizably British milieu–they drank tea and wore Marks & Spencer’s cardigans–but talked in Martian.”