On the Map: A Mind-Expanding Exploration of the Way the World Looks 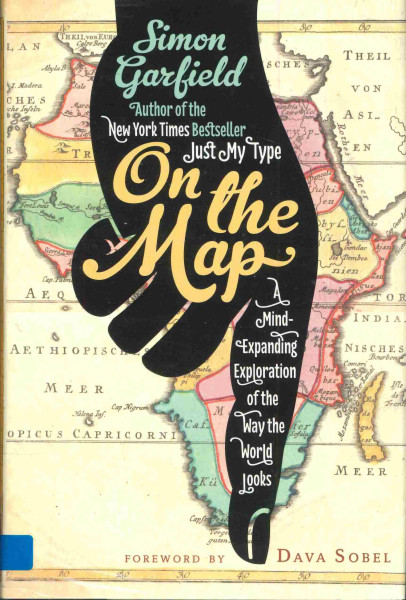 On the Map: A Mind-Expanding Exploration of the Way the World Looks by Simon Garfield was a delightfully lengthy overall history of mapmaking. As explorers travelled to the new world at the end of the fifteenth century, mysterious and misshapen representations of North America first appeared on paper. It was exciting to see how the new continents of both North and South America gradually filled in, with recognizable coastlines and interiors. Chapters covered all the cities which were the leading cartographic centres of the time, such as Venice. Garfield connected his chapters with short chapter asides, fittingly and humorously called “Pocket Maps”.

Mapping is not limited to the realm of paper, and Garfield profiled both the evolution of atlases and globe making as well as the newest digital technologies such as Google Maps and GPS. The days of the paper map may be limited, and while I will regret when that day comes, both Garfield and J. M. Barrie might not be as upset for other reasons. According to the author:

“I seem to recall we used to buy maps that folded, or maps that once folded when they were new and then never again. Or that we used to pull down shoulder-dislocating atlases from shelves and thumb through their indices, and perhaps wonder at how many Springfields there were in the United States.”

J. M. Barrie, the author of Peter Pan, wrote about the alleged ease of form in folded pocked maps:

“At the words ‘convenient for the pocket’ you ought to up with your books and run, for they are a danger signal,” Barrie advised readers of the Edinburgh Evening Dispatch. ‘But you hesitate and are lost.’ Almost every house in Edinburgh contained a map that the whole family, working together, cannot shut, he went on. ‘What makes you buy it? In your heart you know you are only taking home a pocket of unhappiness.’ At the end of his diatribe, Barrie offers a list of negative advice born from terrible experience. This includes, ‘Don’t speak to the map,’ ‘Don’t put your fist through it,’ ‘Don’t kick it around the room’ and ‘Don’t blame your wife.’ And if, by sheer fluke, you do succeed in folding the map, ‘don’t wave your arms in the air or go shouting all over the house “I’ve done it!” If you behave in this way your elation will undo you, and no one will believe that you can do it again. Control yourself until you are alone.’

Garfield profiled the leading mapmakers of their day, one whose attention to detail left me awestruck. John Ogilby was legendary for his exceptional degree of accuracy in his seventeenth-century maps of London:

“The maps were extraordinarily accurate. A surveyor had actually gone out with a measuring wheel and walked each route, accompanied by a colleague on horseback carrying supplies. Ogilby insisted on high levels of factual information on each map. He standardized the measurement of the mile, setting it at 1,760 yards rather than the shorter Roman mile of 1,617 yards or the longer ‘old English’ mile of 2,428 yards.”

In the days of exploration, maps were home to phantom islands and mysterious landforms. Some of these, such as the west African Mountains of Kong, found their way onto maps for decades despite the fact that they did not exist. I highly enjoyed the chapter on the mirages of islands and deliberate deceptions explorers placed on their maps. One of the most disputed maps of all is the alleged Norse map of Vinland, purporting to depict either the coast of Labrador or the island of Newfoundland, three centuries before Columbus voyaged across the Atlantic. The Vinland map has been the subject of various degrees of scientific testing over the years, with verdicts ranging from it being an authentic document to one that was forged, to authentic again to… “perhaps it’s real but it could be fake”. One verdict that cannot be disputed is that the Vinland map is controversial, and the chapter on it will have your eyes glued to the page.

Garfield ventured off the planet to talk about the mapping of Mars. He wrote about its mysterious canals and how astronomers might have perceived them as such. As a transit fan, I especially enjoyed the “Pocket Map” devoted to the mapping of the London Underground, whose maps were designed by Harry Beck. Garfield also wrote about how important maps are to fantasy fiction and games such as Dungeons & Dragons. For map geeks, On the Map will stay forever on your lap, as it was hard to put it down.