One of Us: Conjoined Twins and the Future of Normal 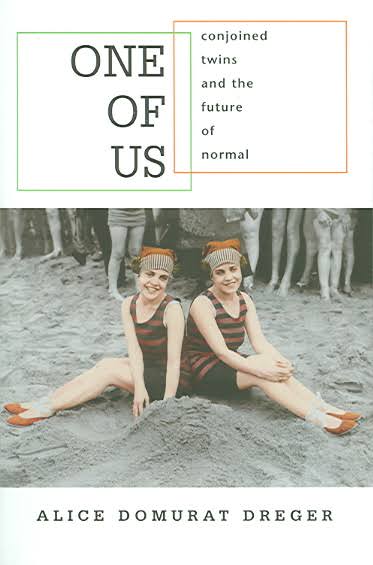 One of Us: Conjoined Twins and the Future of Normal by Alice Domurat Dreger is devoted to championing the rights of those twins whose lifestyles none of us could ever truly comprehend. Conjoined twin births are extremely rare and when the general public becomes aware of them, it is usually in a news story about a separation attempt. Dreger, in her short book, puts forth the argument against separation, where the “normal” in the title refers to living a full life while still conjoined, thank-you very much. Life as two “singletons” (individuals who are not conjoined) should never be the ultimate goal at any cost. Dreger gave voice to twins who are often silenced by surgeons and lawyers, or twisted by tabloid talk-show hosts. The underlying counterargument of One of Us is the medical supposition that conjoined twins have to be separated. Show conjoined newborns to a dozen surgeons and all of them will draw up schematics on how to divvy up their skin and organs. No one considers leaving the twins as they are. While an operation could in many cases leave the separated twins with only half a body, with one twin getting some organs (usually the sex organs, bladder or rectum) and the other twin without, later years of reconstructive surgeries and therapies may in fact do more harm than good. What parents like to see their children spend years of their lives in hospitals? Why do people, specifically the medical establishment, not consider a conjoined life as “normal”? Dreger writes:

“But many professionals still do not believe that a conjoined life can ever be worth living, despite so much evidence to the contrary. The bias toward separation at virtually any cost is obvious in the medical and bioethics literature.”

“[S]urgeons are often too quick to separate twins that might better remain together, out of the bias that only separateness can be good, no matter what the cost in lost anatomy and physiology that surgery would entail.”

I remember in 1984, Burmese twin boys Win and Lin Htut came to Toronto for separation surgery. Controversial at the time was the decision of what to do with their single set of male genitalia. Lin was assigned the male organs while Win, who had lived all two and a half years of his life as a boy, was reassigned as a female. This still appalls me, how his sexual identity could be stolen so cruelly, all for the alleged benefit of creating two singletons. I suppose that the surgeons never considered Win’s life as a penisless boy an option. The nurses who assisted in the operation testified in Canadian Nurse magazine:

“In fact, before the operation, ‘as nurses we were not sure what to do with [these] “healthy” children.’ But the nurses were deeply troubled after the operation: ‘The healthy “whole” children whom we had adopted as our own were now, seventeen hours later, separate but badly deformed. Now they seemed handicapped.'”

“Most of us are so used to dealing with people who fit invisibly into the standard categories of anatomy and identity that it is jarring when we meet someone who doesn’t. And it is the recognition of this awkwardness, the recognition of how comfortable it can be to be considered normal, how uncomfortable it can be to be considered abnormal, that motivates adults to want to surgically normalize children born with unusual anatomies, to separate the Loris and Rebas…”

I was already well familiar with the craniopagus twins Lori and George Schappell, and in preparation for this book review I reviewed some of their TV appearances on-line. George was born Dori, and then changed her name to Reba. She hated having a rhyming name and wanted to emulate her favourite singer Reba McEntire. A few years ago Reba came out as a transgendered man and I will respect his wish to identify as a trans man by using the name George and masculine pronoun when appropriate.

In 2000 they, as Lori and Reba, were the subject of an A&E documentary by Ellen Weissbrod called “Face to Face”. Dreger took part in this documentary and writes about it in the book (p. 132).

In “Face to Face”, Lori and Reba are going about their lives, just as well as any able-bodied singleton. We are watching them in amazement, but we are not gawking so much at their different anatomy as at the realization that they don’t need any special care from anyone. Dreger writes about other documentaries:

“By focusing on how a ‘deformed’ child is to be made ‘normal’–how conjoined twins are made into singletons, for example–medical documentaries reinforce the idea that the unusual anatomical state is unjustly imprisoning the real child. By implication, the real child always has a typical body; at best, a child with unusual anatomy is seen as an unfinished product that requires someone else’s expertise to become fully human.”

On one tabloid show over twenty years ago when George was still living as Reba, they hardly had any time to sit down before Jerry Springer asked about their sex lives. Lori, who at the time was a virgin and vowed on the show to remain as such until her wedding day, has since stated in a number of interviews that she has had intimate sexual relations including intercourse. The audiences always gasp. It’s a scandal, or an incestuous orgy, to have your sibling in on the act. What pray tell does George do during all this? He tunes out, which is a practice that conjoined twins learn to master. If you have trouble tuning out the annoying guy whistling on the bus next to you, how does a conjoined twin tune out his sister when she is having sex? How grotesque! How unnatural. No, for a conjoined twin, tuning out your sibling is easier than you think. And having sex is natural.

Why do singletons titter at the thought of conjoined twins having intimate relations? We as singletons know what acts are private and must remain so: urination, defecation, sexual stimulation or other sexual activity. We cannot imagine going to the bathroom and inviting a sibling to come in and watch. Yet for conjoined twins, their acts of elimination are normal bodily functions that have never been private. And not all conjoined twins share one bladder or bowel. Thus they must notify the other that it is bathroom time. Yet singletons are repulsed by the thought. Okay, maybe we can get our minds around the idea of going to the bathroom with an audience, fine, but…sex? Should conjoined twins live sexless lives because they don’t meet our standards of privacy and propriety? Chang and Eng Bunker, known as the original Siamese twins because that was their nationality, each married and fathered twenty-two children between them. Violet and Daisy Hilton, pictured on the book cover, could not initially obtain marriage licences even after travelling to twenty-one states. Marriage licences were denied them, on the grounds that it would be immoral and bigamous:

“The curiosity and condemnation people expressed about the Hiltons’ sex lives seems to have been more strident than usual; but such reactions have always been associated with conjoinment. Many singletons simply cannot abide the idea of conjoined twins having sex.”

Yet in spite of their anatomy, conjoined twins see themselves as individuals. In interviews with Dreger, they all use the first-person singular pronoun. And the conjoined adults have no desire to be separated. They are happy as they are and would never consent to separation surgery even if medical advancements now offer this possibility:

“Do separation surgeries achieve the goal of freeing children to live independent lives as individuals? The problem with this question is that conjoined twins almost invariably state that, from their point of view, they don’t need to be separated to be individuals, because they are not trapped or confined by their conjoinment.”

“The fact is that across cultures and across time, the great majority of people who are conjoined simply have not expressed the sensation of being overly confined, horribly dependent, physically trapped, or unwillingly chained to others.”

“Chained” is an apt term. Violet and Daisy Hilton starred in the 1951 film “Chained for Life”, the title of which can be interpreted in a number of contexts. While neither sister personally felt unjustly “chained” to her twin, the title was chosen for the singleton audience who cannot imagine living a life while attached to another person. Chained or straitjacketed, it’s all the same to a singleton. The movie deals with the legal ramifications after Violet commits a murder, and what the courts will do when she is sentenced to death. Will Daisy have to die along with her? Note that the movie’s opening credits do not even treat Violet and Daisy as individuals. They are labelled merely as “The Hilton Sisters”, without individual names.

Dreger devoted one chapter to several documented sacrifice surgeries. You will have a heavy heart after reading it. Sacrifice surgery refers to a case of conjoinment where both children will die soon if left intact, but one might live if separated. Sometimes these surgeries occur shortly after birth, however Dreger wrote about three cases that occurred in infancy, where one conjoined twin was gradually becoming weaker and was compromising the health of the other twin. It’s bad enough for parents to have to deal with such a heartbreaking situation. They certainly don’t need the arm of the law interfering should they refuse the surgeons’ recommendations for the sacrifice surgery. Dreger argues that sacrifice surgeries operate on very uneven ethical grounds and that if parents do not wish to opt for the surgery, their will should be respected and the law should not intervene. The final decision about what to do with severely ill conjoined twins should always fall with the parents if the twins are too young to give their own consent.

One of Us was a rapid read and an informative supplement to the “Face to Face” A&E documentary.