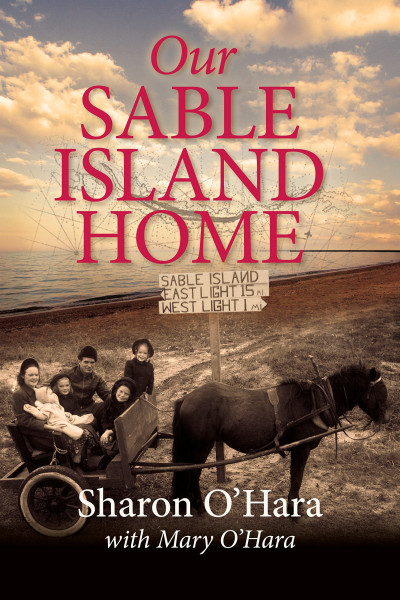 Sharon O’Hara lived on Sable Island from 1951 to 1953, while her father was stationed there as officer in charge of the wireless station. She lived on this lengthy sandbar wisp when she was between the ages of six through eight. She and her older sister Mary wrote Our Sable Island Home in 2014 as a promise to their late father, who had always wanted to write about his adventures on Sable. The O’Haras’ memoir was slight at 174 pages but rich in black-and-white photos, all taken by their father. Mr. O’Hara was wholly devoted to his wife and four daughters, and it showed in his daughters’ loving reminiscences. Sable Island history is certainly enriched by Mr. O’Hara’s photo documentation from the early fifties.

The O’Haras were not the only residents of Sable. Staff of the meteorological station, the superintendent and the lifesaving crew also occupied this strip of sand 42 km across yet only 1½ km wide. Sharon and her three sisters spent most of their two years as the only children on the island. Our Sable Island Home was full of their adventures among the sand dunes, playing in the narrow Wallace Lake, and hanging out with the island horses, seals and birds. The island was like a gigantic sandbox and playground. Mary and her sisters loved to be outside. However, it wouldn’t be unreasonable for a parent to be worried about his or her children wandering among the tall marram grass so close to the raging ocean:

“Mary and I sometimes wonder how our mother, who was quite a worrier, let us have so much freedom on Sable Island. Mom was the kind of mother who doted on and hovered over her young children in an effort to keep them from any danger. Maybe, in her mind, compared to our baby sisters we were grown-up schoolgirls. She knew we wouldn’t go dangerously near the ocean or the big seals. Maybe our mother was too busy to worry about us, or maybe she was confident that if there was anything really serious I especially would tell, like when Mary fell through the ice.
“Certainly there was much in our adventures that neither Mom nor Dad ever knew because we chose to keep secrets. We told only those stories that would not interfere with our freedom to roam in one of Mother Nature’s unique gardens. That was perhaps the greatest gift we had as children on Sable Island.”

The O’Haras’ story was not all tender loving memories, typical of slender life stories such as this. Life on such an isolated island can change a person psychologically, and Sharon wrote of some incidents that were heartbreaking as well as scary. The desperation the family faced in radioing for help to evacuate their infant daughter, who was suffering from pneumonia, will leave you on the edge of your seat. How could one get off the island when faced with such a dire emergency? Older sister Mary suffered sexual abuse from one of the staff workers, and Sharon’s candour will strike you in its proximity to such cozy heart-warming island stories. Mary kept this secret till 2009: she lived with her internal pain for almost sixty years. To show how isolated island life can mess with a person’s head, Sharon recounted that just before her family left Sable, their father was called in the middle of the night to help stop a murder attempt. A man was threatening his wife with an axe. The woman in this case was known to be mentally unstable, and suffered from nervous breakdowns. She had to be straitjacketed when she left the island, so it could be reasonable to believe that her husband was only holding the axe as a means of self-defence, versus the perception it gave others, that he was wielding it to commit murder.

Our Sable Island Home however will leave you with pleasant descriptions, such as the sounds of the ocean and its various voices through the sands, the grass and on the waves. Sharon learned at a young age to recognize the sea conditions by the sounds it made on the environment.

An edit could have helped, as I noted two errors or awkwardnesses:

“…wild rose peaked out from its low bushes”

“…a familiar home-leaving sadness, overcame over us.” (emphasis mine).

I acquired Our Sable Island Home from the Whitby Public Library through our interloans service. I have more books about Sable Island and since one of these is on loan from a close relative I will be posting another Sable review after my next book.