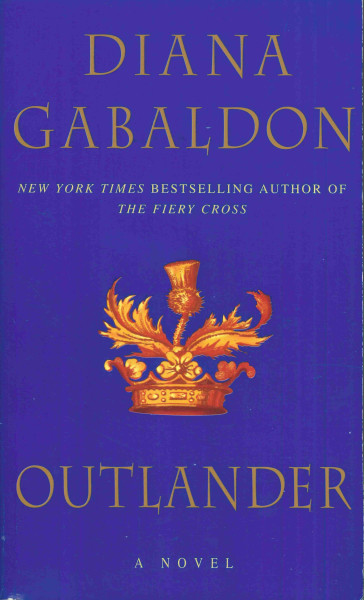 Before I embarked on my second trip to Tristan da Cunha I wanted to bring only one book along. Four years ago when I visited the island for the first time I brought five paperbacks to read during the trips to and from the island. I read two of them and started a third. I wanted to bring only one long book this time, and looked through my personal collection of chunker novels. I had two by Tolstoy and two by Diana Gabaldon. I chose Outlander by the latter not because of the TV series. I have never seen the show. I selected Outlander because of its length–851 pages–and the reputation of its author. When Gabaldon first started publishing books I read how difficult it was for libraries and bookstores to classify her fiction. What fiction genre best suited her? Romance? Historical? Fantasy? In the end, the Mississauga Library System decided to throw her into the wide pool generally known as just plain Fiction. Years ago the World’s Biggest Bookstore in Toronto held an author appearance by Gabaldon, which I attended. Although I had not read any of her books yet, I was nonetheless interested in her enough to see her in person. I did not speak to her afterwards.

Thus I come to Outlander, the first in her series. The story follows Claire Randall, a nurse who served the soldiers in World War II. After visiting a mysterious stone formation in Scotland in 1945 she is transported through time two hundred years earlier, 1743. Claire is an English woman from the future now trapped in Scotland: she is the outlander. We follow her through the countryside as she encounters Scots clansmen, English redcoats, witches and wolves.

The 1945 dialogue between Claire and her husband Frank was surprisingly contemporary. (Outlander was written in 1991.) Her phrases and curses didn’t seem suited for a Brit in the middle of the twentieth century. Yet perhaps because of that, the pages flowed rapidly. I am a slow reader, yet I flipped through these 851 pages at a rapid clip. I rarely had to reread anything before I advanced in the story. That is a reading habit of mine, where I tend to reread everything I do not fully understand immediately. I also always reread very long sentences in case I am hung up by punctuation or clauses I did not expect. I want to read the sentence again, unencumbered by my initial break. Gabaldon does not write long sentences. I acknowledge that there are many authors who have no intention of telling their readers everything in short succinct sentences. In those cases I just learn to accept that as the author’s style and I remember that things will be explained later on (usually). For Gabaldon, I found she often over-explained things. Perhaps she felt her readers would lose track of characters and plot developments in such a long novel. I never had to flip back to find out who a character was again.

Gabaldon never introduced a character or action without explaining it immediately, or at the latest on the following page. Thus mystery or foreshadow was always satisfied and I never had to take notes or put my finger between the pages of a development that was not yet explained, ready to come back to it later. Thus I considered Outlander an “easy read”, one that did not challenge me in its chronology or style. My fellow shipmates have been asking me during the duration of this weeklong trip how I am liking this book, and my description always includes the word pedestrian.

Gabaldon’s descriptions by a woman suddenly transported two hundred years in the past weren’t extraordinary, yet I liked the imagery in “It was a moonless night, but the starlight caught the metal bits of the harness in flashes of quicksilver.”. Yet even a description such as that seems hackneyed.

One part of the novel that troubled me was the beating Claire received at the hands of Jamie Fraser, the man she eventually marries, who is also an ancestor of her twentieth-century husband Frank. Jamie used eighteenth-century excuses to justify why he had to beat her. Men living at that time probably did abuse their wives and had the law on their side to do it. He expressed no remorse for laying his hands on her and eventually convinced Claire to accept his reasoning for doing it. It was a case of Stockholm Syndrome in the 1740’s Scottish highlands. I was bothered by such violence and by Claire’s acceptance of it. I wondered if Jamie would beat her again or if he will brutalize her in sequel novels. Outlander is a violent novel, and Jamie is superhuman in his ability to survive lashes, beatings and torture. He seems to be barely recovering from one act of brutality when he is once again flagellated or has his hand nailed to a plank. For a young man raised within a life of pain and torture, perhaps that is the only way he knows how to resolve matters. I would expect a woman from the 1940’s to be torn up inside as she tried to reconcile the beating she received at the hands of the virile young superman she is in love with. I did not find this.

For a novel about time travel, there is only one initial trip through the past. Everything that follows is simply explained, as if you were taking a walk and describing what you see (hence my opinion of the novel as a pedestrian read). I do not know if Gabaldon evolved in her writing to play more with time (or if her reader base was just fine with things as they were, thank-you very much, so no need to change anything) yet I did feel that the whole premise of the novel, where a woman falls back in time two hundred years, did not include any parallel story from her former life in 1945. What was Frank doing during her trip through the past? Would Claire use her knowledge of future events to change the past (which was now her present)? Gabaldon addresses this time-play and how Claire might alter her future by the end of the book, so clearly a sequel was in the works. She has piqued my curiosity with enough questions to seek the answers in the book that follows.