This morning I took a cab to the Standard Bank at Thibault Square in downtown Cape Town and paid my passage aboard S. A. Agulhas II. Once I got the bank receipt, I walked back to the hotel and staff there transmitted a copy of it to the offices of Table Bay Marine, the company that books passengers on the ship. Once this was done, I headed to the ship to give the purser my passport. Security at the gate let me in and, excitedly, I walked up to the ship. It was much larger than I had thought it would be. Mark thought it would be as large as our Norwegian cruise ship, but I think the Agulhas II is slightly smaller.

I walked up the long staircase to the only entrance I could see: 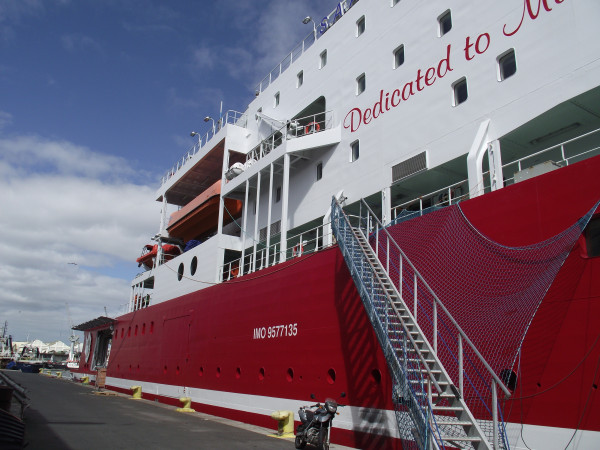 I had to sign in and was given a visitor sticker to wear. The purser’s office was just around the corner and I chatted with Bernie, the purser, for a little while. He had a small stack of passports on his desk already, most of them from the UK and some from South Africa. Tristanians do not have their own passports and use those from the UK. He told me where I would be staying, and said that my room was on the same floor as his office. I asked if it was all right to see it, and he walked me over. There were two bunkbeds, which surprised me, since I was thinking that I’d be having my own cabin. Now no one told me that I’d have my own room, I just presumed that I would based on an Agulhas passenger’s Tristan blog I had read. The more I think about it the more I like the idea of sharing a room with three others who are en route to Tristan. We will be an interesting bunch, that’s for sure. I will just get there before they do to reserve a lower bunk.

I asked Bernie if I could take some photos of the empty room, because once you get four men in there, it’s going to be a mess. He told me to take as much time as I liked: 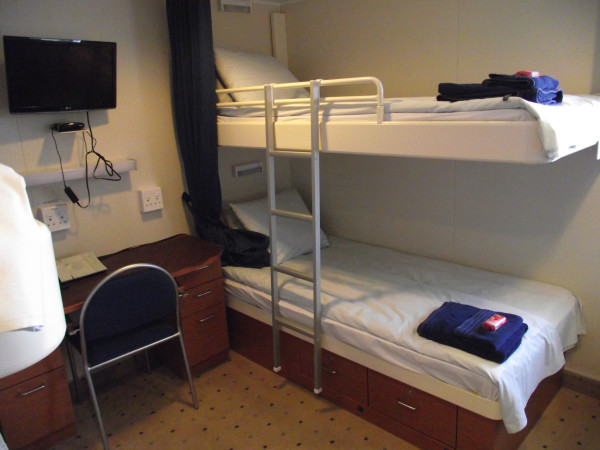 Nice bathroom. I thought that passengers might have to use the toilets or showers in separate rooms, as they are in some hostels: I hate shots one takes of oneself. They all look bad. Nevertheless, this was taken in the mirror on the outside bathroom door. I have my “visitor” sticker on: Bernie said that passengers should be on board an hour earlier than when they were told, thus at 11 a.m. Immigration officials will have to meet with everyone before departure. I respect Tristan’s autonomy to conduct its own immigration checks yet wonder what this all entails. Will it be a quick go-through like when I reenter Canada from the US? Or will it be like when I visited the DPRK, and had my suitcase turned inside-out?

I walked up and down East Pier taking photos of the ship. All of a sudden I heard the blades of a helicopter, yet didn’t see anything flying overhead. I knew that there were helicopter tours which departed from East Pier, so I just thought it was that. But the sound was extremely loud, much louder than what you hear when a helicopter passes over you. I then realized that this must be the sound of the Agulhas’s helicopter, and when I walked to the stern, I saw it on a higher deck. I took several pictures, yet the best one was taken only after its blades stopped rotating: Later that afternoon I walked around Bo-Kaap, an old Muslim community famous for its multicoloured low houses, cobblestones, and very steep Longmarket Street up Signal Hill: An older woman is ahead of me carrying two green bags. We met on the corner of Ciappini Street and Longmarket, where the above photo was taken, and she smiled at me and shook her head in anticipation of the climb she had ahead of her. After I had taken some photos, I caught up with her and offered to help carry her bags but she kindly declined. She took frequent breaks, yet made it all the way to August Street, second from the top. 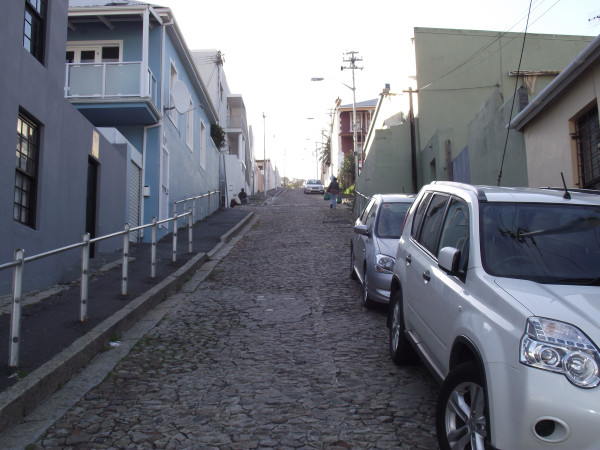 Near the top of Longmarket Street there are some very nice homes, such as this one: And all the homes command panoramic views of Table Bay. You can even see S. A. Agulhas II on the left: As I climbed Longmarket Street, I often turned around to see Table Mountain and Lion’s Head. They grew so large it seemed I could reach out and touch them. What price would you pay for this view? 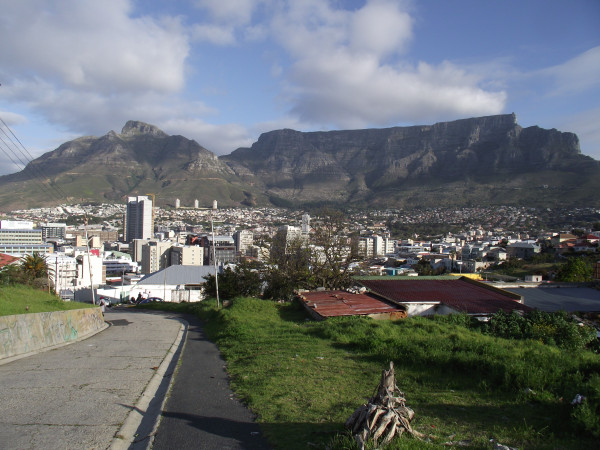 The multicoloured houses of Wale Street: Parking on Waterkant Street can be quite steep. Better have your brakes on or you might find your car in the middle of the road: This evening as I was repacking my luggage for the trip aboard the Agulhas, I watched a news broadcast in Xhosa, complete with its characteristic clicks. I saw one Xhosa language CD in the Exclusive bookstore yesterday, and will consider picking it up when I return from Tristan.

Later on today, after well over a year of planning, I set off for Tristan da Cunha.