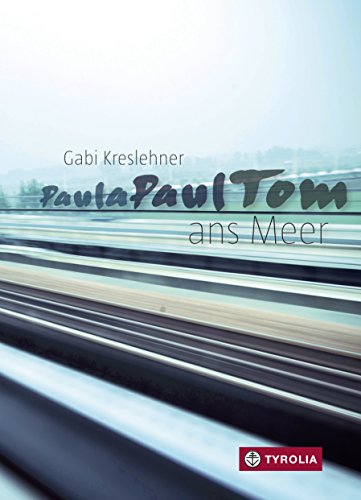 PaulaPaulTom ans Meer by Gabi Kreslehner is an Austrian novel for teen readers. The story is about the adventures of three teens. The parents of fifteen-year-old Paula are holding a family birthday party for her grandfather, and Paula has been sent to pick up her seventeen-year-old brother Paul from the home where he resides. Paul does not live with his family due to his mental disability. His disability is never mentioned, although Kreslehner mentions that Paul has the intellectual capacity of a child:

= “Your brother is a child, Paula. And he will always be a child. You know that.”

Paul is prone to episodes of wandering, preoccupation with repetitive tasks, nonsense phrasing and breakouts of screaming. Although Paul is two years older than Paula, he will always be, in this particular sense, her “little brother”.

While on the train to pick up her brother, Paula meets a seventeen-year-old saxophone player named Tom. Paula is attracted to him and tries throughout the length of the book to get him to offer her his phone number. There is a mutual attraction but Tom plays aloof. Paula and Tom are typical teens of today with their noses buried in their chirping cellphones. They sometimes engage in text chats while travelling on the train, even when they’re sitting opposite one another.

The title of the novel comes from Paul, who instead of wanting to go to his grandfather’s birthday party wants to take the train to the seaside. His rapid flow of speech renders not a request in the form of a question, but rather a repeated demand, as “PaulaPaulTom ans Meer” ( = “PaulaPaulTom go to sea”). Paula finally relents and calls her father to ask permission to take this rather lengthy detour. The parents are wary of allowing Paul to go on such an extended trip because they don’t believe that he actually wants to go the sea. In the parents’ eyes, Paul could have asked to go anyplace, even to the moon (the father does indeed provide this hypothetical example).

Tension reverberated off the pages when the train reached its seaside destination and Paul decided he would not leave the train. Paula must deal with her brother who is determined to stay on board. His screaming sends her into a panic while she cowers under the glares of departing passengers. This is too much for Paula to endure, so she abandons Paul and leaves him on the train. I will not spoil it for readers as to what Paula does next, but I could feel the stress in Paula’s voice as she tried to convince her brother to leave while throngs of passengers stared and said awful things to her.

The flow of the story was rapid and the perceptions were focussed on a teen’s world. I raced through the narrative whenever the three teens were on the train, however I had to reread some passages because I couldn’t understand what and why events were occurring. What I thought was my lack of attention or perhaps even poor language skills ended up being neither. Kreslehner often jumped into the future. She intermixed her chronologies and it was confusing to go back and forth because these future events were alluded to, but hadn’t been formally introduced yet. Thus I was left with plenty of questions which nagged at me. I wondered Why is she writing about this? in the middle of some other story which was obviously predating the chronological insertion. The author repeated these paragraphs of future occurrences word-for-word when the storyline “caught up” with the progressive narrative. I had many a feeling of déjà vu when I caught myself rereading a paragraph that I knew I had encountered earlier. It seemed much clearer the second time around.

Kreslehner incorporated plenty of German slang, which I expected in a 2016 teen novel. I did however have to use my enormous German dictionary to learn some idiomatic contexts. Because we were reading about a reluctant teenage girl sent by her parents to fetch her mentally disabled brother, she used various slang words for “idiot” or otherwise to designate “stupid”. Paula expressed her resentment for being sent on this task by using disparaging terms for Paul’s intellectual disability. Aside from referring to him in these terms, Kreslehner presented Paul alternately as an annoyance who was shipped off to a group home in order to free his parents from caring for him, as well as a beloved and wanted member of the family. The contradiction is poignant: the father convinced his wife that sending Paul to a home was in their son’s best interests, yet they don’t pine for him and no one wants to go there to pick him up so that he could attend his grandfather’s birthday party. Yet, when Paul does attend the party:

= “You were right, Lene, growled dad, “we would have missed him at the party!”

So the family appears only to be able to tolerate Paul being around them in small doses, yet by the end of the story they all feel good about themselves for bringing him to the party.