Pauli Kivistö was my boyfriend from 1996 to 2000. He died on April 8. I met Pauli at Club Colby’s, a gay dance club in Toronto during the spring of 1996. He danced my way and told me that I was a good dancer. When he had to leave (as I was not wont to ever leave the dance floor until it was time to go home) he gave me a slip with his phone number on it. The next day at work I did a bit of pre-Internet detective espionage and checked the number in the city directory to find out his full name. The name was assigned to a Kivisto, P. I thought the name was Slavic. It was not until I had told Paul (as he had introduced himself to me) during a mutual sharing of interests that I was interested in Finland and Finnish culture when he revealed to me that he was Finnish. I thought he was putting me on, just saying he was Finnish because he knew I loved Finland so much. Not true. Paul Kivisto was born Pauli Kivistö into a large family, all of whom, including his six brothers and sisters, were born in Finland. The baby of the family was Pauli, who was born in Canada. He told me his parents named him Pauli Kenneth Kivistö, thinking they’d use Kenneth as his English name, but that name never stuck and he was always Pauli to the family. During my four years with Pauli I started calling him Paul, but after many visits to his childhood home in Sudbury and hearing what his family called him, I adopted the Finnish name too. Check the captions on the photos below; one can see from the captions when I switched over calling him Pauli. He was my Pauli.

Pauli (do not aspirate the P; the Pau- resembles pow in English; the L in -li is not as thick as in English, pronounced lee; accent on the first syllable) and I loved to travel. We went to Las Vegas five times, and took my mother on one trip there and then took both of our mothers on another trip. We loved to bake in the desert heat, as I can recall the temperature in Las Vegas hitting 107° degrees Fahrenheit, the hottest temperature I have ever endured. Our friend Alan had a condo in Palm Springs and we rented it on three or four occasions. We also visited Grand Canyon twice. Our favourite trip together was by far our trip to Finland, Sweden and Russia during the summer of 1999. Pauli’s mother Eila was a singer in the Suomi Conference Choir. They were on tour and the there was room for a few others to “fill up the tour bus”. We jumped at the chance. It would be Pauli’s first visit to the country of his heritage, and the first trip overseas for the both of us. I fell in love with the country and especially its capital, Helsinki. It was during this trip that I made up my mind while standing on Helsinki’s Aleksanterinkatu that I would return he following summer to study Finnish. And I did just that.

I never stopped thinking about Pauli after we broke up in 2000. We parted amicably, but Pauli was not interested even in being friends. I would have loved to continue being his friend, but that was not his wish. When I fell in love with Pauli I also fell in love with his entire family, and even though we broke up in 2000, I remained friends with the Kivistös. It might sound odd–very odd, in fact–that I would remain in contact with my ex’s family to this day, but I did. I loved these people like beloved in-laws, and they treated me like a son- or brother-in-law. During this time as we mourn Pauli’s death, I am happy to have them to call up and cry with.

My favourite memories of Pauli are the times I spent travelling with him. Thankfully, I have so many happy memories of our vacations. Over the past week I have looked through all my vacation albums and chose some of my favourite photos to scan. I captioned each photo and I reproduced exactly what I wrote about each picture here. 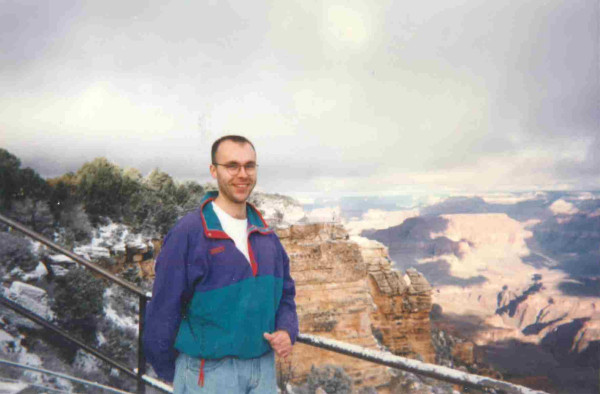 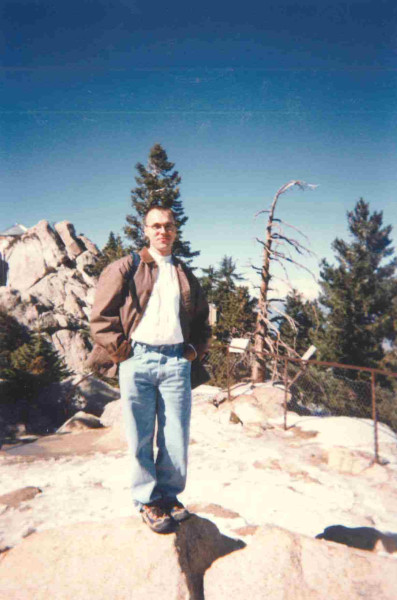 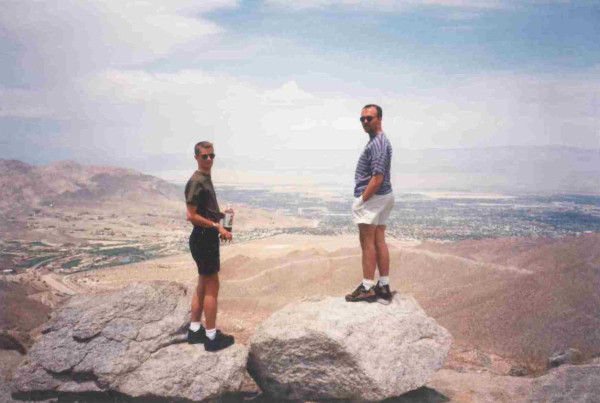 First lookout point. For much of the twisty turny mountain drive there were no guard rails on the roadside. Palms to Pines Highway.  18 May 1997 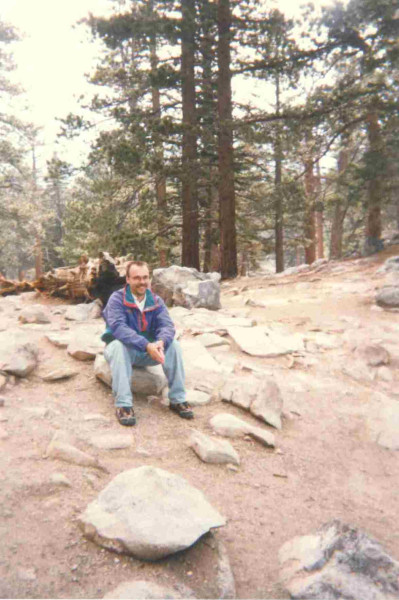 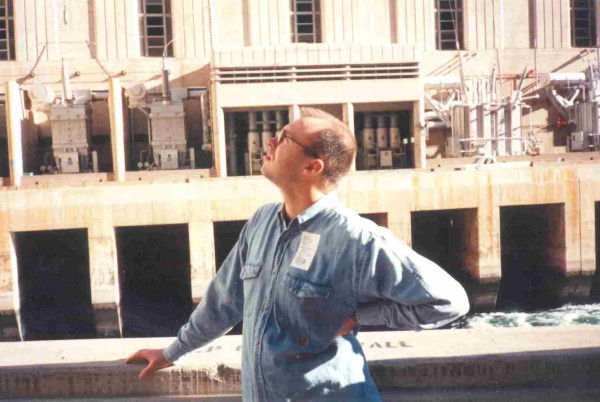 Paul looking up the concave side of Hoover Dam, during the dam tour.  30 October 1997 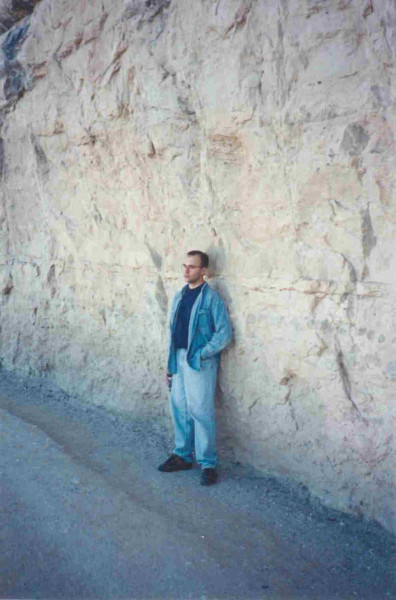 Pensive Paul on the Bright Angel Trail. Grand Canyon.  31 October 1997 [I love this picture of Pauli.] 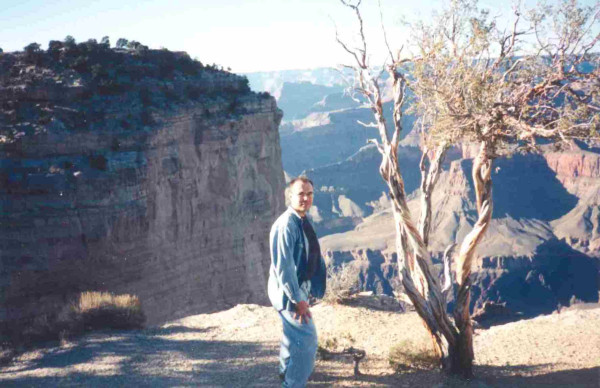 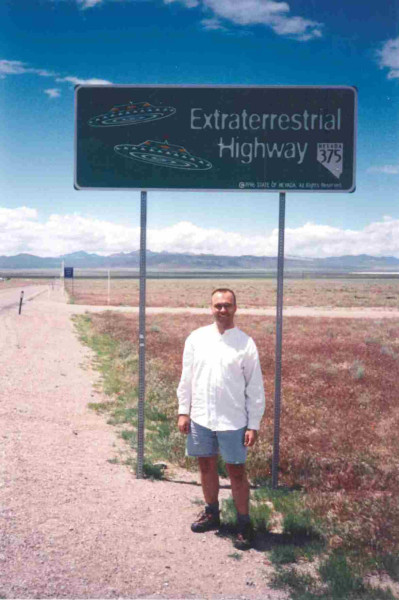 Paul standing across the road from tiny Rachel, Nevada. Rachel is the only town on the Extraterrestrial Highway (Hwy 375) & the nearest community to Area 51.  4 June 1998 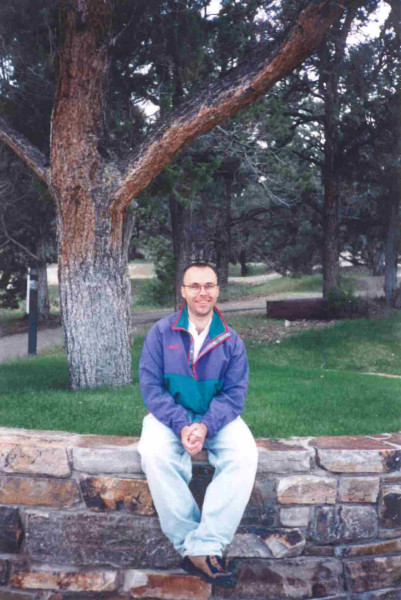 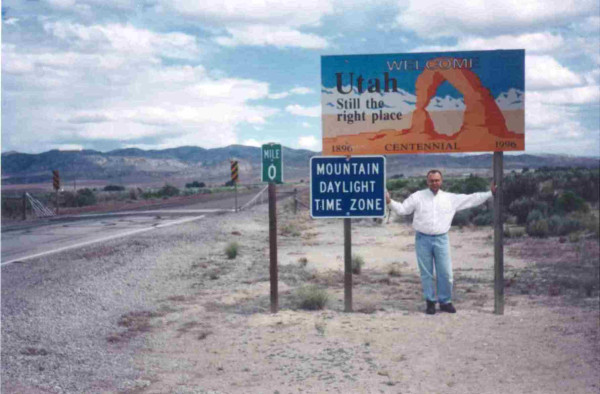 Crossing time zones and state lines. After our tour of Great Basin National Park, we had to drive into Utah since we were so close, taking Hwy 487 into Garrison, UT (just a garage and a shed) then north on Hwy 159, then west on Hwy 6/50 back into Nevada.  5 June 1998 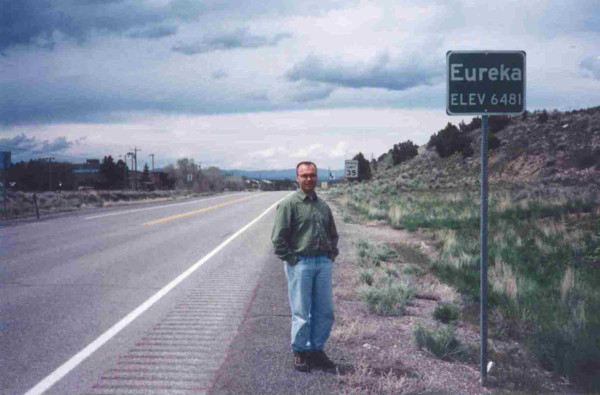 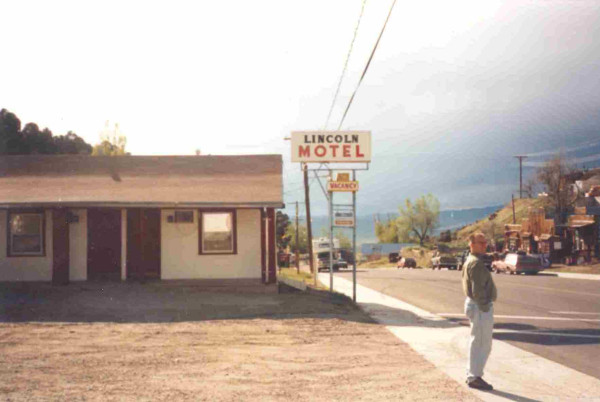 Lincoln Motel in Austin, Nevada. Words cannot describe the state of my churning stomach. The sinking wood floor; the patchy carpet which looked as though it were home to growing mould; the TV with all of four (that many!) channels; the heating system which I feared would burst into flames; the gap under the front door, a perfect invitation to visiting tarantulas; the ice cold water that came out of the hot tap which made my heart beat like crazy when I had to wash my contact lenses; the bearded redneck toothless “hotelier” who was a card-carrying member of the N.R.A. and took one look at us and said “You two guys don’t want that” (referring to the room we had reserved with one queen bed). We moved into a room with two queen beds to save our asses. (Yet we still slept in one and mussed up the sheets of the other.) Also, it thundered and rained (got dark very quickly) and since the motel backed up right against a mountain I feared a mudslide would bury us any second. We would see it coming anyway cuz the bathroom window had no curtain. The little Toiyabe Café opened at 7 a.m. the next morning and we left the Lincoln Motel in time to be the café’s first customers. The waitress there, whom we met yesterday on her first day on the job, reminded me of Julie Goodyear’s “Bet Lynch” character from “Coronation Street”. She thought the people from Ely, where she was from, were ” [Mysteriously, my caption ended abruptly there. I believe I was going to ask Pauli for her exact quote because I didn’t want to record it inaccurately.]  6 June 1998 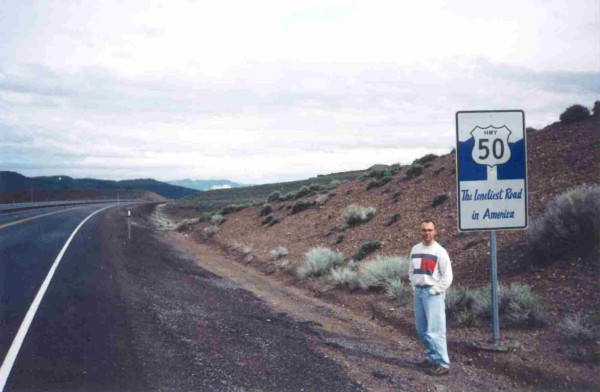 Austin, Nevada’s Lincoln Motel is now a memory. Heading west on Highway 50, the Loneliest Road in America, to Reno.  7 June 1998 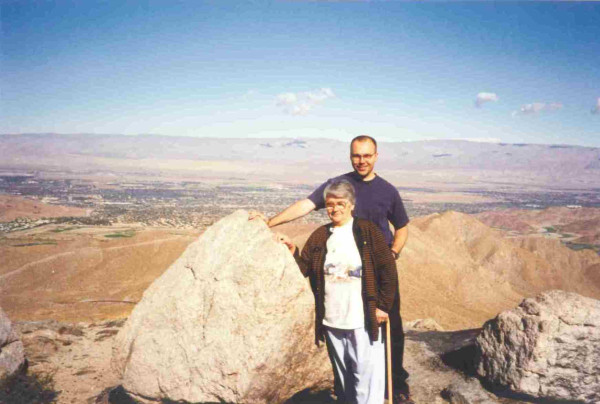 Paul & Mrs. Kivistö at a lookout point along the Palms to Pines Highway.  6 December 1998 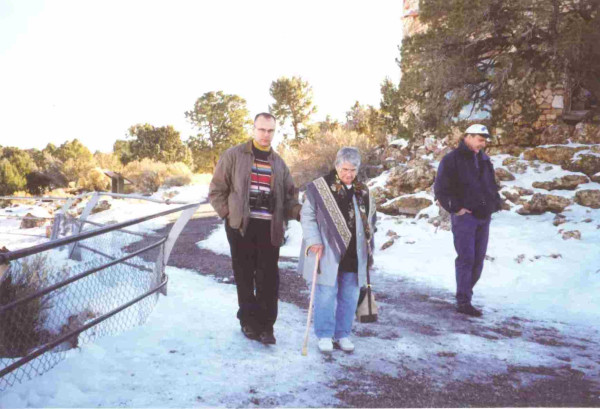 See how icy the trail is? Paul & Mrs. Kivistö. The man on the right & his wife were among the very few people we saw on the East Rim, or on our drive to the South Rim. Talk about a small world: Mrs. Kivistö overheard the man talking–in Finnish–it seems he’s a Finnish Canadian from Ottawa. Mrs. Kivistö chatted to him in Finnish & gave him a shock! Grand Canyon East Rim Desert View.  11 December 1998 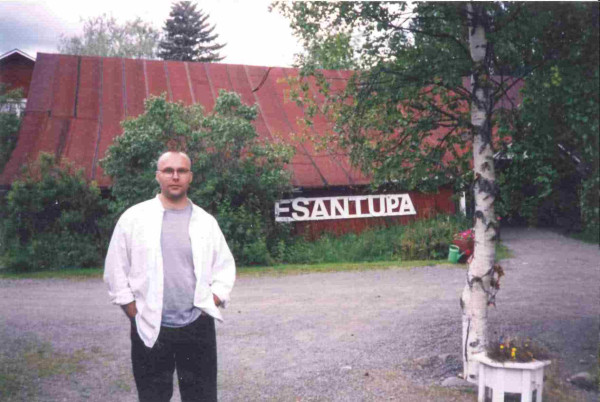 Pauli outside Esantupa ( = Esa’s cottage) in Kauhajärvi. We had dropped off our bags and were going to have a walk around the grounds.  8 August 1999 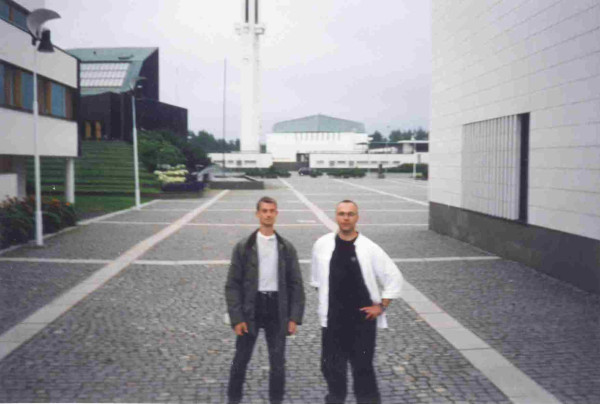 Pauli and Mrs. Kivistö aboard our new bus; Marta Legrady and Eric Sahlberg behind them. Our choir are the first passengers on the bus, which came fresh off the assembly line in Germany. We were en route to Lahti. We took a break in Jyväskylä at Viherlandia, an enormous gardening/horticultural centre and restaurant. I mailed some postcards in a box in the parking lot.  12 August 1999 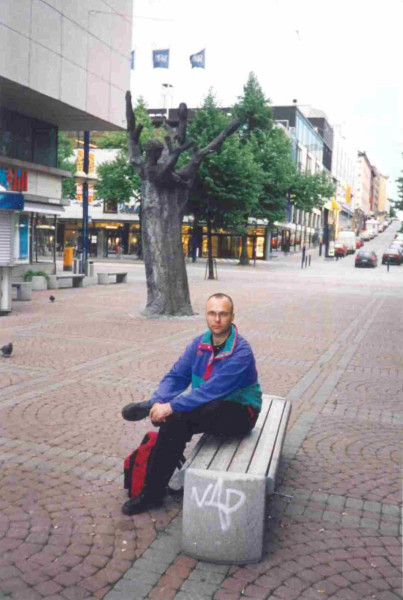 Pauli in downtown Lahti. We had just seen a man walking around in a bright pink tutu. No kidding. Too bad I didn’t take a picture.  12 August 1999 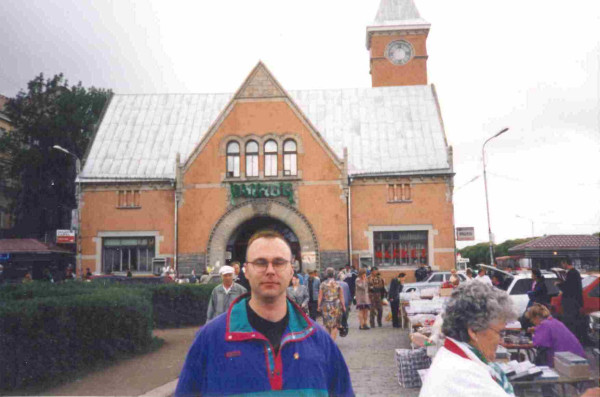 Pauli and Mrs. Kivistö in front of the neo-Gothic Market Hall in Vyborg [Russia, formerly Viipuri, part of Finland]. The market stalls were full of bootleg CD’s and counterfeit designer clothing. I bought a collection of seventeen Vyborg postcards for twenty markkaa. I felt too privileged to haggle the price down.  13 August 1999 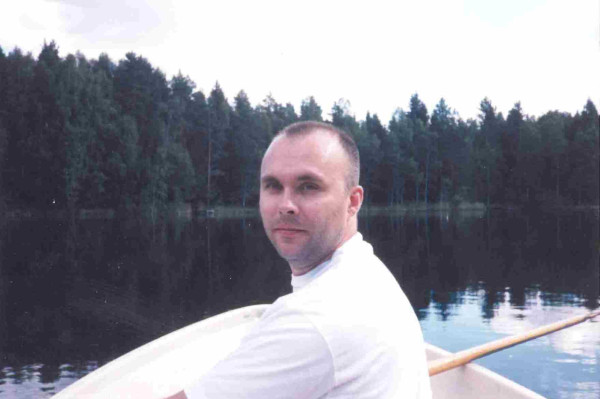 One of my favourite pictures of Pauli, at the oars on a rowboat on Mustajärvi. 16 August 1999 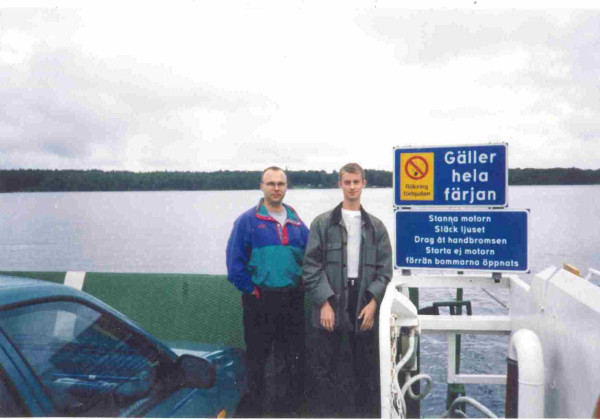 Pauli and me on the ferry [to Bolmsö island, Sweden]. I have translated “Rökning förbjuden / Gäller hela färjan” to mean “Smoking is not permitted anywhere on the ferry”.  19 August 1999 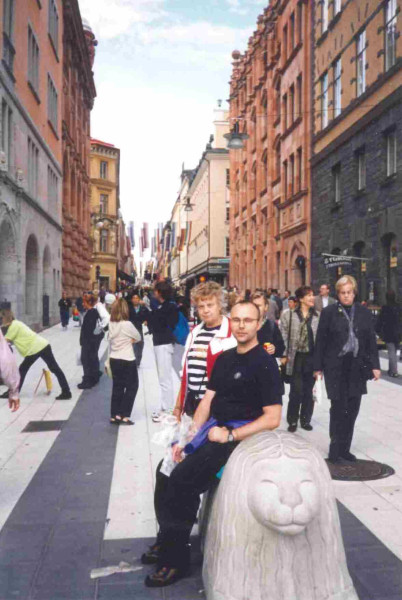 Lempi Järvinen and Pauli, with their bags of licorice, on Drottninggatan in Norrmalm [Stockholm]. Lempi gave us a walking tour of the new part of the city.  21 August 1999 Eila and Pauli on Lintusaari, and Jaakko in the boat. Near Kivijärvi.  25 August 1999 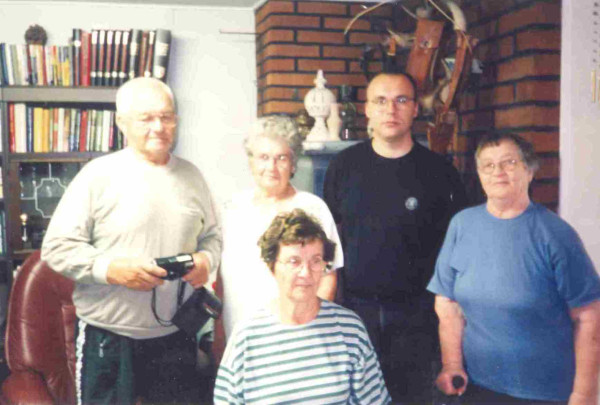