Mark and I are back from a ten-day holiday around Ontario. We started off in Pelee Island, a dream destination for an island-lover like me. I had been to Point Pelee over twenty years ago, but never got to the island. Pelee Island lies 16 km south of the tip of Point Pelee yet is a 30 km ferry ride from Leamington.

We drove onto the ferry Pelee Islander II and sat outside on deck the entire trip, which only took ninety minutes. 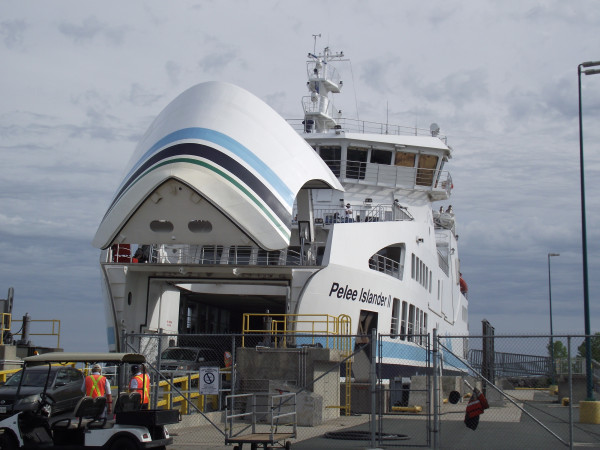 I saw Point Pelee disappear as the small community on the north of Pelee Island around Scudder marina came into view. The ferry would dock on the west side. We saw the small Pelee Island Airport runway as we approached the dock.

Mark and I were due to check in at our accommodation yet realized that dining options on the island were limited and likely clustered around the dock, so decided to eat first. We selected the Westview Tavern which, like all restaurants at that time, was offering only outside dining. We sat at a picnic table under an umbrella. There were about eight tables, all of them occupied. As we later discovered, this place was the only restaurant open on the island during the evening.

Perch is a Lake Erie specialty and we were hoping to have some while on the island. The server told us that unfortunately they had run out, so we settled on pickerel instead. While we were waiting for our meals the chef himself came out to our table to inform us that there was still perch; were we still interested? You bet we were. Thus we dined out on the restaurant’s most famous dish: a bucket of perch, gently battered, with fries and a Caesar salad. If Mark and I were the types who took pictures of our food we’d post such a photo. We did get to see the pinkest sunset I had ever seen. I took photos the following night but the sky was too cloudy: We knew that our accommodation, the Wandering Dog Inn, was on the east side of the island, however we didn’t know how to get there. Granted, you can’t really get lost on Pelee Island, but we didn’t know if we should drive north and to the east or instead drive south to get there. Little did we know that there was an east-west road we could have cut across. We decided to go north, which ended up being the longest route possible but we did get a chance to see the island at sunset. But with no streetlights on the island we could not see house numbers or signs and ended up asking two people out for an evening stroll where the inn was. They told us that we were right around the corner from it, and, sure enough, once we rounded that corner we easily spotted it. Its porch lights were on and there was a sign out front so we would not have missed it.

The innkeep Kevin Miller saw us pull into the lot and in a friendly tone asked “You must be Mark!”. He and his wife Cathy run the place and they were the friendliest and happiest innkeeps I have ever met. I loved their personalities; just click on some of the links at the inn’s website to know what I mean. You’ll die laughing! We stayed in the king suite. This place had neither TV nor WiFi but that was the whole point: you’re on Pelee Island–get out and do something.

The next morning we rented bikes from Comfortech Bicycle Rental. This is my first time back on a bike since my accident and I was able to test drive a bike in order to get the right fit and see how it would feel on my wrist. With a simple adjustment of the seat I could lean back and ride and not apply any pressure to my wrist. I selected a bike with a basket (to avoid having to wear a backpack) and piled Mark’s and my stuff into it. While we were looking at the bikes, in the distance we heard an older man yelling. He didn’t stop and it became clear that he was yelling at us. He was raging at Mark for having taken his mask off–outside–while talking to his granddaughter. Now Mark is one of the most careful people I know about wearing a mask and using sanitizer. He may have taken his mask off, briefly while outside, but the whole time he was a respectful two metres away from the young woman (the granddaughter) who had been running the store. During the rant the granddaughter kept silent, and I had the feeling while looking at her that she had had to endure these kinds of outbursts before. I felt embarrassed for her. While Mark explained himself I had words with the granddaughter to tell her how considerate Mark was with taking precautions in these times of COVID. She did not think that Mark had endangered her safety in any way. Things cooled down and later on while we were getting ready for our bike trip the grandfather approached Mark with an apology. He was genuinely sorry and that changed our outlook completely. What a difference that apology made; our attitude towards Pelee Islanders would have been tainted for good if he hadn’t said anything.

Our first trek was to Fish Point, to see the southern tip of Pelee Island, which stretches out to a long sandspit, just as it does on Point Pelee. The island is alive with butterflies and moths. They must use the island during their migrations. While on the way to Fish Point, this hitchhiker moth decided to come along: 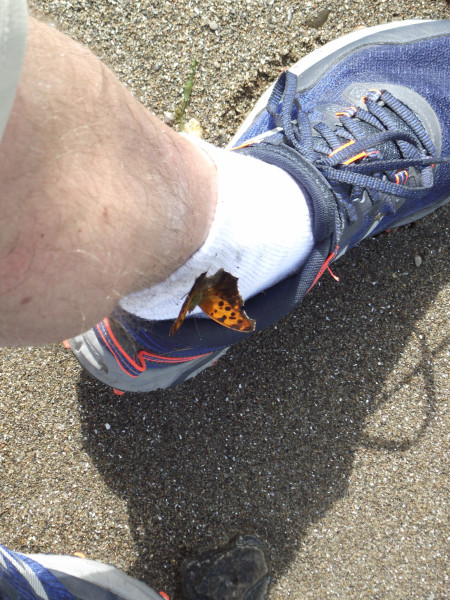 I later would experience a burst of butterflies as we cycled up East Shore Road. Mark was ahead of me and a truck had passed in the opposite direction. I felt part of a psychedelic fairy tale as yellow and black butterflies swarmed about me in the gust of wind the truck left behind.

As you approach Fish Point you are greeted with flocks of seagulls and Canada geese: They slowly shuffle down the sandspit or into the water as you approach. We were lucky in that we are able to walk to the southernmost tip of the island. Sometimes the spit is disconnected from the island.