Quirky QWERTY: A Note on the Type 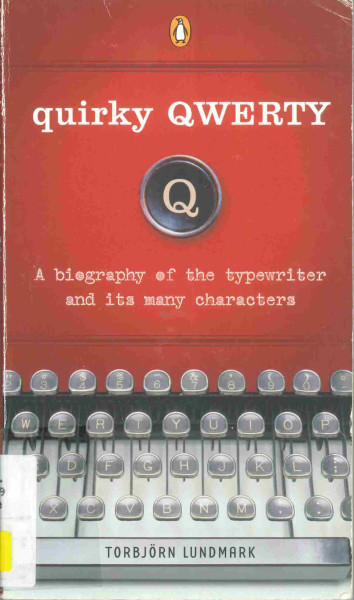 Quirky QWERTY: A Note on the Type by Torbjörn Lundmark was a short book about the history of the typewriter and the keys found on it. Note that the subtitle on the front cover is different from what is on the formal title page (which is the subtitle that counts). Lundmark provided very brief histories about each of the twenty-six letters of the alphabet as well as other typewriter keys, and I was surprised to learn that many of them evolved from Egyptian hieroglyphics. However, in the introduction, Lundmark provided the caveat that:

“This is not a scientific work. In fact, nothing in this book can be said to be absolutely true. Even if it were a scientific book this fact would not change. Scholars still argue about the origins of the alphabet and what the letters signify, and why the numbers look the way they do, and how all the other characters that appear in these pages came about.”

So after I read that, I thought gee thanks. Now I don’t know if what I just read is true or not. But this pocketbook of 172 pages was stylized to be a fun and visual read, not a scientific one. Nevertheless, Lundmark did ask a relevant question at the beginning:

“In our modern times of computers and electronics rather than mechanics, why haven’t keyboards reverted to alphabetical order? There is no reason to worry about sticky type-bars anymore. So, why are we still stuck with the QWERTY keyboard?”

And the answer is simple: it is easier to stick to old standards than to invent new ways. The author did provide illustrations of five alternative keyboards so one could compare the supposed ease in typing.

Writing did not start out with both capital and lowercase letters. Capitals existed at first, and were designed to be blocky and angular to make them easier to chisel into rock such as granite. However as writing surfaces developed, such as papyrus, scribes found it a lot easier to create a cursive style that flowed because the angles and edges found on capitals tore the leaves. Reducing the number of features found on capitals, such as B becoming b and R becoming r made the writing experience easier and faster. Hence the birth of both the lowercase and cursive writing.

I found the origin of the terms “uppercase” and “lowercase” to be most interesting:

“‘Upper-case’ and ‘lower-case’ are printer’s terms. The typographer’s job was to fit individual pieces of type, cast in metal, into a wooden frame to make up the text of a newspaper column or a page of a book. Each letter was picked up by hand and placed into the frame.
“The metal type was kept on two trays, or cases, one above the other. The lower case held the minuscule type, which was used more frequently, and the upper case contained the capital letters, which were used less often.”

Symbols were discussed as well, however the 2002 publication date preceded the advent of Twitter, thus there is no mention of the networking site when discussing the various functions for the # symbol.