Render Unto Kaiser: A Transkei Dossier 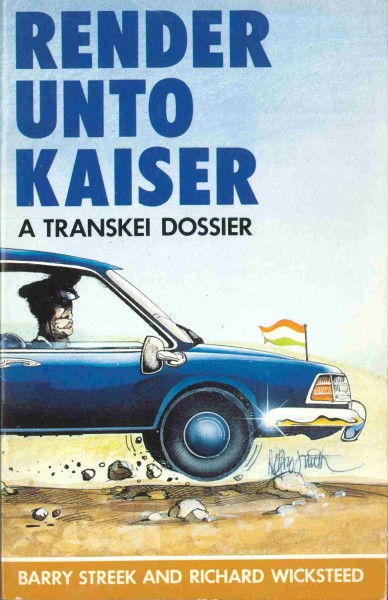 I bought Render Unto Kaiser: A Transkei Dossier by Barry Streek and Richard Wicksteed (love the punny title) at Clarke’s Bookshop during my time in South Africa after my first visit to Tristan da Cunha in 2013. It was published in 1981, five years after this bantustan was given “independence” by South Africa. I have been interested in the cookie-cutter division of South Africa into bantustans ever since I first learned about these self-governing puzzle pieces in the late seventies. Where else to obtain books on this failed policy of apartheid than in Cape Town bookstores? I came back with suitcases full of such books on each of my two trips to South Africa.

Render Unto Kaiser was a lengthy, 378-page account about the creation of South Africa’s first independent black homeland and the leaders who ruled it like a fiefdom. The pages were packed with solid bricks of text which made them look like pages in a phone book but they nonetheless constituted can’t-put-down reading. I would have appreciated some photos or maps, yet my prior knowledge of the area (which included my university global political geography project on the matter) came to my aid.

Streek and Wicksteed were exhaustive in their research and their endnotes and bibliography showed it. I am happy to say that I already own a few books cited in the bibliography. The blurb on the back cover of the book summed up the contents succinctly:

“Far from proving the viability of segregation, Transkei is destroying it–and, almost unknown to the South African government and the National Party with the exception perhaps of a few planners, that experiment in separate development is turning into a monster. It is a bizarre story, and many of its chapters are known best by the long-suffering people of the territory and their relatives in South Africa’s urban areas. In blissful ignorance, white political parties and the government talk about constellations, federations, and confederations as though the Transkei experiment is a success; it is held out as a carrot to other homeland leaders; yet it remains a dumping ground for redundant people some official has classified as ‘Transkeian’. For the Brothers Matanzima, Transkei has provided status, power and wealth; for the chiefs, a measure of the same rewards; but for the mass of the people, ‘independence’ has meant nothing except more poverty, more oppression and fewer citizenship rights. It is indeed a case of ‘Render Unto Kaiser’–and in Transkei there are very few aspects of life which do not fall under the sway of his ubiquitous authority.”

And who is this Kaiser? It is the first name of the homeland’s Prime Minister, Kaiser Matanzima, who ruled Transkei with his brother George, who served as Transkei’s President. In fact, the two brothers switched roles yet it was always Kaiser who was in charge, regardless of political title. The authors assert that he was a self-serving patsy of the South African government, who accepted bantustan independence to bolster his ego as a new international head of state and to reap all the benefits that came with it:

“It has been South Africa’s gain that Kaiser Matanzima is a man who follows largely the dictates of his own self-interest. It has been easy to persuade him to follow Transkei’s direction, in return for certain material and prestigious rewards. As long as he remains in power, this pattern is likely to hold.”

“One of the points made in this book is that Transkeian ‘independence’ has benefited only a tiny élite in one of the most underdeveloped regions of the world. The main benefit reaped by this élite–which is formed by the governing party, its relatively wealthy supporters, the civil service, and the armed forces–must be measured in salaries far beyond the comprehension of the mass of unemployed, underemployed and migrant workers of the territory.”

The authors covered a wide range of subject matters; the first chapter, the longest at 107 pages, dealt with the founding of the Republic of Transkei. Other chapters dealt with the lives of the Matanzima brothers, Transkei’s financial dependence on South Africa, migrant labour, corruption, the marijuana industry and foreign development scams that siphoned millions off the national treasury. For a country that was recognized by no other state except South Africa, the Republic of Transkei desperately wanted international recognition, and the authors included a humorous chapter entitled “The High Price of Credibility: Diplomatic Fiascoes”. It seems that as long as the government was paying PR people to promote Transkei around the world, they could remain happily in their employ if they told the Matanzimas that dozens of countries were on the brink of offering full diplomatic recognition of Transkeian sovereignty. The Matanzimas remained hopeful for UN admission but the authors quoted memos from the world body as well as from the White House where it was stated dramatically in no uncertain terms that the rest of the world regarded Transkei not as an independent republic but merely the latest scheme in South Africa’s attempt to legitimize its policy of apartheid. Countries would not accept Transkeian passports and no amount of pomp and glitz at inaugural independence day celebrations (or anniversary celebrations) could convince any other nations to attend the party. Transkei was putting on the party for solely its own deception:

“…Transkei’s chances of becoming truly independent from South Africa have been, and will be at least until the end of the century, non-existent. For Transkei, and for the other homelands, there has never been, and never will be, the chance of cutting the economic and political strings which have been manipulated so shrewdly by Pretoria since the inception of the Verwoerdian master-plan.”

South Africa looked upon the independent homelands as bastions of cheap labour. They withdrew the citizenship of millions of black South African citizens, shipped them off to phony homelands and then reaped the rewards of cheap labour since the homelands had no means to employ them all. And when South Africa was done with these workers? Ship them back to Transkei–they’re your problem:

“The main functions of the homelands have to date been the political control of the black labour force, and the reproduction of this labour force as super-exploitable workers for the South African economy.”

Streek and Wicksteed thoroughly covered all aspects of the fraternal monster that governed Transkei like a paranoid Big Brother. Dissent was suppressed and laws rewritten to punish offenders retroactively. It was 1984 occurring in Africa in the late seventies.

I thoroughly enjoyed Render Unto Kaiser. I could not put this book down as I learned more about this dubious state with each page.