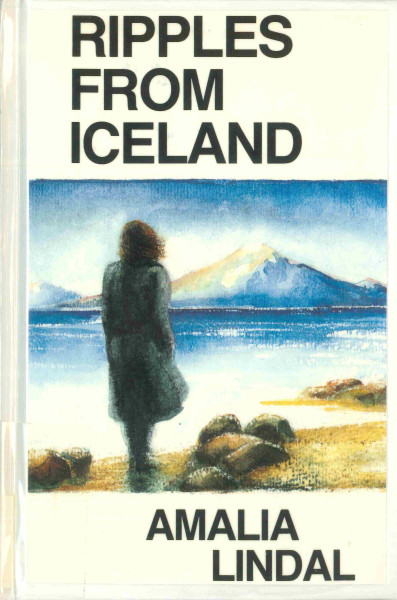 Ripples from Iceland by Amalia Líndal is a memoir originally published in 1962. Líndal was an American journalism student at Boston University who fell in love with a fellow student who was from Iceland. Ripples is her account of her life in Iceland from 1949 to 1961. I first heard about this book from reading Names for the Sea: Strangers in Iceland by Sarah Moss. Both Moss and Líndal moved to Iceland (the former because of work, the latter because of love) and wrote about their experiences. I obtained this edition of Ripples, a 1987 reprint with an added epilogue, thanks to an interloan from the University of Manitoba.

Iceland has changed since 1961–man, has it ever–so I look at Líndal’s work as a historical memoir. For one, she described her transatlantic flight as taking fifteen hours! Did flights really take that long in 1949? Líndal, a student of journalism who was passionate about writing a novel, can certainly tell a good story. She wrote about her culture shock in Icelandic grocery stores and the foods she could no longer purchase. However instead of telling a humorous story about being unable to find certain foods and taking it all light-heartedly, Líndal gave the impression as soon as she set foot on the tarmac of unfortunately a stereotypical American tourist who expects the rest of the world to be just like her. I wasn’t put off by her jingoistic opinions since she didn’t write with a whiny undertone, and she was prepared to be self-deprecating by sharing her many faux pas, especially in her interactions with men. In Iceland in the 1950’s, sex roles were much more traditional and women were expected to be mothers and housewives. When women attended parties with their husbands, they were to socialize only with other women. Líndal told of some dagger-eye stares she received by some wives when she made the moves characteristic of an Icelandic femme fatale by merely talking to their husbands:

“So through the years I continued to retreat until I realized with a shock that I was quite unable to talk to men as people without feeling I was ‘on the make.'”

Líndal wasn’t afraid to laugh at herself or to paint herself as a fool whom others laughed at. Her jingoistic attitudes crumbled when she discovered there was simply no way she could duplicate her way of life in Boston while living in Iceland. In her twelve years on the island, she grew to see herself, and to think, like an Icelander.

To show that Ripples depicts a time in Iceland’s history which is not represented today, look no further than the attitude towards women and travelling. Women travelling today do not have to worry about the experience which befell Icelandic married women:

“Most women give up their names when they marry, so that is nothing new. The Icelandic woman doesn’t do this, however, but remains the daughter of her father, in this patriarchal country, until the day she dies–causing agonies of confusion if she travels abroad with her spouse under her own name.”

The attitude Líndal encountered towards English has also disappeared. In my experiences in Iceland, everyone I met spoke perfect English and did so enthusiastically. At no time did anyone have to find someone else to deal with my enquiries. This occurred even in the western town of Seyðisfjörður, as far away from Reykjavík as you can get. However Líndal spoke of an Icelandic society where no one spoke English, or if there were locals who spoke her native language, they were reluctant to use it. So until Líndal learned Icelandic, she was isolated at parties, and her husband was loath to translate for her all the time.

Yet the weather situation she got bang on. What you read about the ever-changing weather in Iceland is true:

“They say in Boston, ‘If you don’t like the weather, wait a minute,’ but in Iceland it changes before you even decide whether you like it.”

Ripples was full of funny reminiscences that often left me laughing out loud. I wish I could have listened to her reading her memoir in her own words. I praise Líndal for not being afraid to write about herself in an unfavorable light. She joked on numerous occasions of Icelandic children remarking on her big nose or her appearance in general. In Iceland in the 1950’s, there were so few foreigners that all non-Icelanders stood out, so it was easy to spot them and to make remarks about them. You can picture yourself next to her as she struggles with cooking and in dealing with curious enquiries. She told plenty of stories that could have been lifted from an “I Love Lucy” episode, and her woeful attempts at Icelandic cuisine were the funniest:

“The cold preserved the foods in the cold closet, but every cake I made during that season was lumpy because the ingredients never reached ‘room temperature.'”

I read the 1987 edition of Ripples, which contained an epilogue that dealt with Líndal’s life after 1962. Unfortunately Líndal didn’t reveal many details about her personal life in the epilogue. Before one even gets that far, however, the author blurb on the back cover states “Amalia Líndal-Webb lived in Iceland from 1949-72. Now remarried, she lives in Toronto, Canada where she is a freelance writer and instructor of Short Story Writing at the University of Toronto.”. It would have been nice to know the circumstances that led to her second marriage: was she widowed? Divorced? She never said. There is a mystery however about the circumstances that led her to leave Iceland and never return. She did write about leaving–briefly–but when compared to all the detail she supplied when writing about other moments of her life, the life-altering decision to leave Iceland was barely addressed. Líndal’s first two sons came of age in the early 1970’s, when the Vietnam War was raging and the draft was still a fear among eighteen-year-old men and their families. She was opposed to the war and didn’t want her sons to be conscripted upon their next visit to the US. In order to keep her sons out of the war, she decided to give up her American citizenship, while retaining her Icelandic citizenship, which she had instantly obtained upon marriage. However what made her leave Iceland forever after that? She wrote, quite casually, that she left Iceland in 1972 to escape its winter, since “another winter seemed unbearable”. This seems a disingenuous reason for leaving. She settled in Canada because, when referring to the draft crisis, “[t]hat heated debacle remains a bitter memory”. Over the course of three years her five children followed her to Toronto, yet no mention of her husband. Did he remain in Iceland? While in Toronto Líndal referred to herself as “a 46 year-old ‘single’ with many children”, so I am led to believe that she was still married but “single” in Canada, meaning her husband was back in Iceland. What happened to Baldur Líndal? When did she remarry?

The epilogue also dealt with Iceland’s reaction to her memoir. She expressed it succinctly:

“I managed to alienate most of Iceland, I guess.”. When she received ten advance copies of her work in 1962, she sent one to Nobel Laureate Halldór Laxness. After he had read it, Halldór

“promptly invited us for dinner and described his pleasure with the book. He suggested I go on a cruise till after the book was reviewed and digested. ‘I always do that when my books come out,’ he explained, and I soon discovered why he’d warned me. A renegade himself, he always knew what he was doing, whereas I had proceeded in all innocence to ‘tell Iceland what was wrong with it’, so the interpretation went.”

Ripples from Iceland was full of hilarious episodes and quote-worthy passages. I took so many notes for this review yet unfortunately many notes had to be left out. Líndal’s observations touch you with an immediacy as if you are experiencing them yourself: the biting wind, the fog, the cold and all the other kinds of weather you are likely to experience within an Icelandic five minutes. She was not afraid to talk about the ugly side of living in a cold climate, rashes and blisters and all. I will leave you with one quote that I think sums up Líndal’s Iceland experience:

“Before I came here, I considered myself an easygoing person with normal emotions and a good imagination which I ascribed to a spark of brilliance–the kind that remains hidden whenever it’s supposed to show itself. Since I’ve been in Iceland, however, I seem to express my emotions in italics.”