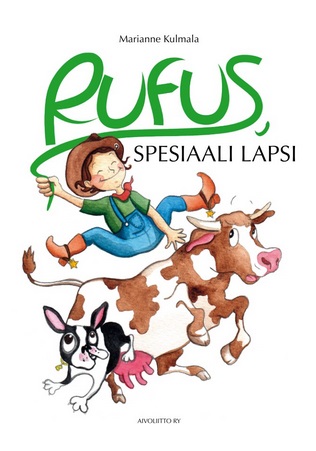 Rufus, spesiaali lapsi by Marianne Kulmala came my way via a suggestion from a colleague. It was not as a recommendation to read this specific book, but rather as a result of my response to a callout from the Toronto Public Library. The TPL has a collection of over four thousand titles in forty different languages, specifically for young people with disabilities. The International Board on Books for Young People owns this collection and it is housed at the North York Central Library Children’s Department for reference use only. The TPL was looking for library staff who could read and review juvenile books in certain foreign languages. Naturally my curiosity was piqued and I made some enquiries. Two of the languages for which they needed readers and reviewers were Finnish and German. I eagerly accepted the assignment.

I do not do enough reading in any foreign language that I do speak. By that I specifically mean reading a book thoroughly from cover to cover, as I do with all the English books I write about. I seem either to read my foreign-language books while on vacation or while coming home from them, or in bits and pieces after I get back. I can look at my shelves at the books which I picked up while on vacation and tell you all about them, but I have never spent any formal time reading them, that is–literally–from cover to cover. No time spent during work meal breaks, no time spent with them while in transit, and no time curled up on my couch next to my birds reading for hours at night. This assignment would give me an opportunity to read, and more importantly, to review, foreign-language material.

My Toronto librarian contact coordinated a delivery for pickup at the branch closest to where Mark lives, and last week he picked up both the Finnish and German books. Fortunately I had finished reading my last book before I embarked on this read and review project. I do not like–ever–to have two books on the go at the same time. The TPL has put me on a deadline so I knew I had to concentrate on reading and writing as soon as I got the books.

My review for the TPL must conform to their standards and thus is different from one that I would normally write. Nonetheless it is still my review, and I have incorporated everything in the TPL review here. Rufus, spesiaali lapsi is about a nine-year-old boy with Tourette syndrome, and the book is divided into two parts. The first part, which takes the reader to page 79, is narrated by Rufus’s Boston terrier, Boris. The second part is told by Rufus’s mother about her son when he was a baby and toddler, and how she detected symptoms that were later indicative of Tourette’s. This part takes the reader to the end of the book at page 101 by the time Rufus is nine years old.

Rufus, spesiaali lapsi is a book aimed at children who are just like Rufus. The reader learns that Rufus is valued because he has been especially chosen by his pet to be his loving caregiver. Boris loves Rufus and it was he who chose him to be his caregiver, because:

Boris states this his biggest dream is to tell people what Tourette syndrome is all about, so that they will understand the disorder and realize how beautiful people who have Tourette’s really are. However, Kulmala also gives Rufus the opportunity to tell others about his condition. While on an outing to a farm with two friends, one of the friends, Saku, asks:

Rufus then has the opportunity to describe Tourette syndrome himself, in his own words. He does so calmly and states the circumstances that bring on his nervous tics.

Kulmala included several fill-in-the-blanks sections where the young reader, perhaps with a parent, can share details from his or her own life. For example, Boris tells the reader that sometimes Rufus has good days and sometimes he has bad days. This is the same for any child. For Rufus, his bad days often make him cry and become angry. Rufus yells out:

= “Why did I have to get this horrible disorder! I want to be just like any other normal child! Rufus yells to his mother.”

This is followed by a small interactive section where the reader is asked:

= “Do you sometimes have bad days? What kind of things do you do?”

The reader is invited to participate in listing characteristics of his own bad days. He is made to feel not alone, as boys like Rufus have bad days as well. Accompanying this section is a consoling drawing of Boris licking Rufus, whose cheeks are streaming with tears.

The book deals with the topic of teasing, and Kulmala raises the issue by introducing a showoff cat named Virtanen. Since Boris is a Boston terrier, he has a short stubby tail and Virtanen loves to strut about, shaking his long tail to taunt Boris. Virtanen even has a rhyme which he sings to throw jabs at Boris:

Kulmala then included an interactive box where the reader is asked if it is nice to make fun of dogs with short stubby tails. Rufus states that Boston terriers are all born with such tails and that it is one of the breed’s noted characteristics. Thus Rufus is given the chance to come to the defence of his beloved pet dog, who like anyone can be the target of teasing. Even prized dog breeds can be teased.

Rufus, spesiaali lapsi is filled with moments that are part of any child’s life, like visiting grandparents and playing in the snow. One funny recurring theme is Boris’s fear of anything white and fluffy. After he watches Rufus’s father shave, where he removes his stubble with the aid of shaving cream, Boris is afraid of any fluffy white substance. He is afraid that if he goes out in the snow, his furry coat will disappear. This is accompanied by a drawing that shows a smiling Rufus in a puffy green winter coat with arms flailing and jumping in the snow. Boris, on other hand, is petrified and has eyes the size of saucers.

The second part of the book is intended for parents to read before they read the book with their children. The narrator is Rufus’s mother, who describes how her son was like as a baby and toddler. It wasn’t until he was five years old that he started to exhibit symptoms like rapid eye fluttering and restless wandering. The mother expressed worry over the mysterious changes she saw in her son, and took him to several doctors. Once she got a diagnosis and name for his condition, she felt relieved:

= “The diagnosis was a great relief to us yet a huge shock at the same time.”

It was a relief for the parents to know that Rufus’s fits and yelling episodes weren’t caused by anything that they themselves did. Rufus’s mother even wondered if she somehow caused the Tourette’s while she was still pregnant with him. They learn that Rufus’s fits are compulsive and involuntary, and that they should not view them as their son personally lashing out at them. One can, however, learn how to control them by reducing situations that may lead to Rufus feeling anxious. It was sad to read about the mother’s frustration in her son’s inability to find friends. The worst of all are the parents who openly forbid their children to play with Rufus. The book ends with proclamations of her son’s uniqueness, qualities of his which enrich the family. For example, Rufus is a gifted storyteller, and she admits that her own storytelling abilities pale in comparison:

= “I gave up and discovered that my son has a skill that I don’t. Rufus’s senses of perception take over his brain in a unique way.”

Rufus, spesiaali lapsi can help children and their parents understand who they are. Children can feel empowered both by seeing Rufus lead a life like any other child and by asking questions which they know Rufus will have the answers to.