Ruthless: Scientology, My Son David Miscavige, and Me 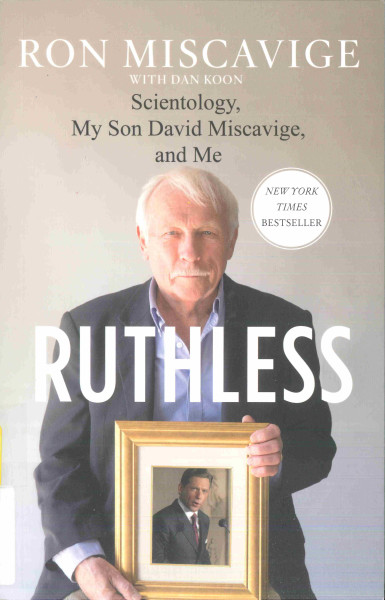 Ruthless: Scientology, My Son David Miscavige, and Me by Ron Miscavige with Dan Koon was ostensibly a tell-all about the current leader of the Church of Scientology and his relationship to his father, the author. Its title alone was enough to draw me in. I was expecting a story about a cruel and merciless dictator of a cult leader who banished his family, yet by the end I wondered why the author chose to entitle his book Ruthless, as Ron’s portrayal of his son certainly didn’t seem as harsh as the all-caps title proclaims. Not that I am siding with David, yet I was expecting 1970’s African dictator antics and didn’t get any. (Throughout this review I will refer to father and son by their first names to avoid confusion by surname-only protocols.) After I finished the book I could only ask myself, what was so ruthless about David? Ron was so estranged from his son that I don’t think even he had much of an idea what David was doing–and Ron was also a Scientologist. His choice of book title seems more a product of rumour than fact, or perhaps a product of a publisher’s marketing suggestion.

Ron started off writing about his family history and how he was introduced to Scientology. I was already halfway through the book yet David was still a teenager. I wondered when Ron would get to the “ruthless” parts. The second half of the book progressed at an accelerated pace, when David became a messenger for L. Ron Hubbard and then, at the age of twenty-six, the leader of the Church after the death of Hubbard.

The details dropped off once David moved out of the house. He became estranged from the family then. No wonder I was left grasping for juicy ruthlessness. Ron didn’t have much to write about. This is by no means my way of giving David a pass as leader of the Church. Ron states plenty of times in asides (classic signs of an interview transcript; it’s Dan Koon who wrote this book) that he believes his son is a corrupt dictator. Ron certainly filled my notes with tabloid quotes:

“And, for certain, he has become corrupt. When I compare the happy, fun-loving boy I raised to the man he has become, the images of Dr. Jekyll and Mr. Hyde spring immediately to mind.”

“Some who come into positions of power may be able to remain whole and true to themselves, but my son David has demonstrated beyond doubt that he is not one of them.”

It’s zinger quotes like this that provide the only proof for the choice of book title. Otherwise we are left with reading about Ron’s work for the church as a composer (whose work was often rejected). He and his wife felt so repressed with Church life–comparing it to a jail that they had built around themselves–that they devised a plan to escape. This was the only part of the book that I felt was can’t-put-down, but I wasn’t on the edge of my seat reading it.

While disenchanted with the way the Church has developed after his son took over, Ron still professes the life-altering benefits he gleaned from Scientology. He nonetheless regrets what the Church has become under his son’s leadership:

“The Scientology movement under David’s authoritarian leadership has morphed from a group that I believe was basically sincere in its efforts to help people understand themselves and better their lives to one that, today, I am sad to say, is primarily a coercive organization. I have watched this transformation over more than forty years. David runs Scientology with an iron fist and, to my mind, it has become a cult, pure and simple.”

“I have known Scientology from when it was a comparatively footloose and fancy-free association of people having fun and finding things out about themselves to the controlling East Germany-under-the-Stasi cult it is today.”

“Yes, I firmly believe that Scientology has morphed into an immoral organization that hides a long list of abuses behind First Amendment protections.”

Ruthless wasn’t exciting, suspenseful or even particularly informative. My impression of Scientology before I read it didn’t change. Ruthless was a rapid read, mostly an exercise in turning pages.