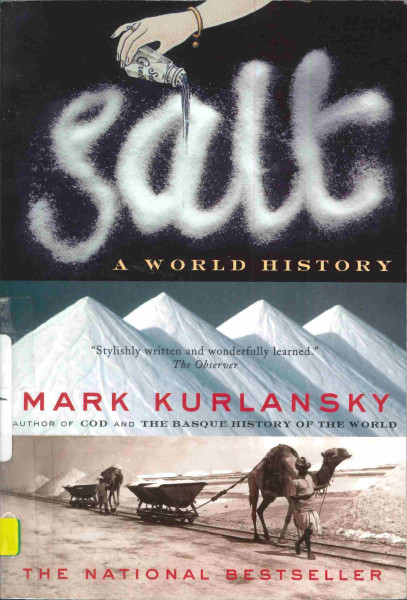 My interest in non-Indo-European languages drew me to The Basque History of the World by Mark Kurlansky. I highly recommend this book, although I read it years before I started writing book reviews. When my library selected Kurlansky’s following book from 2002, Salt: A World History recently as a Rave & Fave, I recognized the author’s name and decided to read it. Kurlansky wrote a lengthy account of salt and how it has affected world history. One might never have thought that a history of salt could fill 484 pages, yet Kurlansky shared how early civilizations used salt as a way of survival by preserving food with it. Ancient Egyptians didn’t stop with food, for pharaohs were preserved in mummification by the generous application of salt.

In the Middle Ages, Venice was one of Europe’s leading capitals for the importation and distribution of salt. It regulated prices by keeping control of salt, and even destroyed other Mediterranean saltworks in order to stay on top. In mediaeval times, cities found power not just by how much gold they mined, but also by how much salt they controlled.

As much as I was interested in the topic of salt as a “preservative of world history”, I was often bored by the storytelling. This surprised me, as I didn’t have the same impression with The Basque History of the World, although I shouldn’t make a comparison with merely one other book in an author’s oeuvre. There was so much covered over 26 chapters that when Kurlansky made a referral to a name or location covered earlier in the text, I sometimes forgot the relevance of the antecedent, which led me to the generous index to find the earlier passages. However to his credit I cannot neglect to say that in each book, Kurlansky supplemented the histories with local recipes. Many from Salt were centuries old. I found the methods that food was prepared and preserved to be fascinating, and not much different from how our pioneers preserved food before the advent of refrigeration.

The archeological records shows that several European cultures reached North America centuries before Columbus. In order to travel across the Atlantic, these explorers had to have ample food stocks to withstand the journey. I was surprised that Kurlansky did not mention, as he did in his own Basque History of the World, that early trans-Atlantic explorers, such as the Norse and Basques, were able to stay out at sea and stave off scurvy by supplementing their diets with salt cod. Thus salt, when used as a food preservative, enabled explorers to travel farther than they had in the past. The discovery and settlement of North and South America would likely not have happened when it did, had the ships not been able to stock such a vitamin-rich non-perishable food source. Salted fish also saved many European populations:

“Fishermen, instead of rushing to market with their small catch before it rotted, could stay out for days salting their catch. Expeditions to Newfoundland were out from spring until fall. Salt made it possible to get the rich bounty of northern seas to the poor people of Europe. Salt cod by the bail, along with salted herring by the barrel, are justly credited with having prevented famine in many parts of Europe.”

Interspersed with these histories and recipes were stories about the ways different cultures acquired salt. Salt was certainly mined, but it was more often produced by evaporating brine. Kurlansky covered how effective each method was and what kind of salt crystals these methods yielded. Salt was produced for different purposes and what I found most interesting was that most salt produced in North America is not for food consumption or for preservation, but rather for snow and ice melting. In fact we owe our system of regional roads in Canada and the USA to the location of salt:

“Studying a road map of almost anywhere in North America, noting the whimsical nongeometric pattern of the secondary roads, the local roads, the map reader could reasonably assume that the towns were placed and interconnected haphazardly without any scheme or design. That is because the roads are simply widened footpaths and trails, and these trails were originally cut by animals looking for salt.”

Salt: A World History gave me answers to more questions about salt than I could ever ask, and thankfully satisfied my curiosity about the origins of all the different coarse and colourful salts I like to pick up from Trader Joe’s.