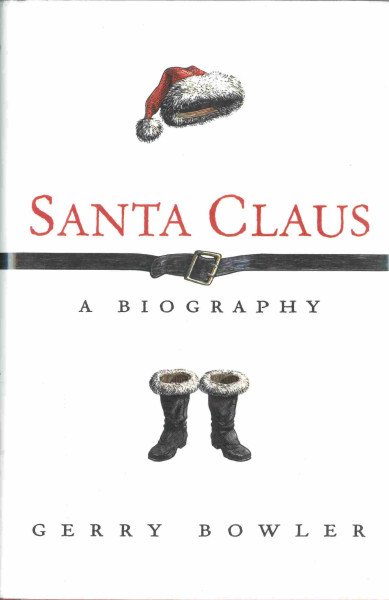 In Santa Claus: A Biography, author Gerry Bowler explores the history behind the Santa Claus myth, tracing it to Saint Nicholas, Bishop of Myra of Turkey in the fourth century. Bowler also looks at modern appropriations of Santa Claus iconography to suit specific means, such as Santa in wartime and in advertising. He concludes the biography with a look towards the future and if Santa Claus will have a part in it among today’s tech-savvy tots.

During the Reformation, Protestant leaders despised the cult of the saints, and Saint Nicholas the gift-giver was substituted by the Christ child as the sole great provider. While Saint Nicholas may have been abolished, the spirit of mythical and fantastic gift-giving remained. This explains the sudden new generation of gift-givers across Europe such as Befana, the witch from Italy.

One of the more common myths about the evolution of Santa is that the Coca-Cola Company single-handedly invented his modern-day portrayal. I’m sure the folks at Coke like to hear others perpetuate this myth year after year, knowing that those who tell it probably are reaching for a refreshing beverage while reminiscing about their beloved childhood Christmases:

“It is far too frequently believed that Sundblom’s work for Coca-Cola created the familiar red-and-white-clad Santa of the modern era. In fact, the Coke Santa was in no way groundbreaking; illustrators for the Saturday Evening Post such as J. C. Leyendecker and Norman Rockwell had already helped fix the Santa in the public’s mind.”

Santa Claus was not a trademark and as a public domain any company could use his image to promote its products, no matter how incongruous the connection. Bowler writes of ads at the beginning of the 1900’s where Santa is shilling rifles:

“No smoke, no noise and perfectly safe in the hands of any boy.”

Companies may not have gained any actual sales from employing Santa as pitchman, but they would have gained some positive publicity and goodwill having the jolly old elf as an endorser. Who would doubt the testimony of Santa Claus? Would he lie to you about the safety of firearms in the hands of your child?

I found the chapter about Santa in the movies and in popular songs to be a boring list of titles. This opinion is influenced by my prejudice that I am not a movie person. Bowler listed dozens of silver screen moments featuring Santa Claus, be they from a specifically Christmas movie or not. The section on songs about Santa was slightly more interesting, and the author certainly covered all the crushingly awful Santa songs written in deliberate bad taste. I was disappointed that Bowler didn’t write about “Santa Claus Has Got the AIDS This Year” by Tiny Tim, one of my (and John Waters’s) favourites.

This book included many black-and-white illustrations showing the evolution of Santa Claus, although the majority of these images were print advertising. I especially liked the first print ads, where Santa didn’t look anything like the red-coated rosy-cheeked morbidly obese elf we know him as today.