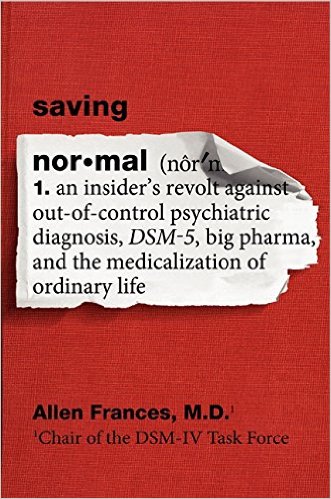 Thank goodness for Saving Normal: An Insider’s Revolt Against Out-of-Control Psychiatric Diagnosis, DSM-5, Big Pharma, and the Medicalization of Ordinary Life by Allen Frances, M.D. This book was written in response to the Diagnostic and Statistical Manual of Mental Disorders, fifth edition, published by the American Psychiatric Association. The fifth edition of the DSM, known officially as DSM-5, has been plagued with controversy ever since it came out in 2013 for its alleged hypermedicalizing of the human condition. What used to be considered quite normal behaviour and merely part of the range of emotions we experience in our lives might now be considered a mental disorder, and faux conditions are now labelled official “diseases”. Just taking a longer time to mourn for a deceased loved one might get you tainted with a diagnosis of melancholia. And don’t get me started on the explosion of bogus diagnoses of ADD and ADHD, as well as childhood autism. With the exception of severe autism, all of these three “A” diagnoses do not exist.

Those are my views. I am no psychiatrist, yet I am not alone. I side with the author, Allen Frances, in the belief that the current state of American psychiatry has seen an explosion in wholly useless diagnoses resulting in the hypermedicalizing of millions. Allen Frances is no antidrug purist or enemy of psychiatry. He is the most qualified person who can make any of these claims, for he was the chairman of the DSM-IV Task Force and part of the leadership group for DSM-III and DSM-IIIR. He is professor emeritus and former chair of the Department of Psychiatry and Behavioral Science at Duke University School of Medicine. The prior edition of the DSM has his name on it, so you can bet he knows whereof he speaks. So what happened in between the publication of the DSM-IV in 1994 and the DSM-5 in 2013? There is one answer, and it’s a biggie:

“DSM-IV was a bit player in the continuing march of diagnostic inflation. The major engine was drug company marketing. Three years after DSM-IV was published, Pharma lobbyists finagled an unprecedented reversal in federal regulations to allow advertising directly to consumers.”

Watch the American evening news at 6:30. Or watch “60 Minutes” on Sunday. The only commercials you will see will be for pharmaceuticals. “Ask your doctor” the ads say, but you only do this after you have heeded the message in the commercials and have already diagnosed yourself:

“The ads were usually misleading but devastatingly effective. Patients self-misdiagnosed and asked their doctor for the magic pill that would correct their chemical imbalance. The doctors listened. Patients who requested a drug they had seen advertised were seventeen times more likely to walk out of the office with a prescription. The massive advertising had put the companies in charge of diagnosis.”

Pharmaceutical companies have the keys to the kingdom:

“The business model of the pharmaceutical industry depends on extending the realm of illness–using creative marketing to expand the pool of customers by convincing the probably well that they are at least mildly sick. Disease mongering is the fine art of selling psychiatric ills as the most efficient way of peddling very profitable psychiatric pills. Manipulating the market is particularly easy in the United States because we are the only country in the entire world that allows drug companies the freedom to advertise directly to consumers.”

The drug companies love that they can advertise on TV. In the past nineteen years they have tried to sell disease by convincing viewers that something is wrong with them. Your child can’t concentrate? It’s ADD. Toddler is fidgety? He’s bipolar. Can’t remember where you left the car keys? You’ve got mild neurocognitive disorder. Why are people so gullible to accept these bogus diagnoses? Frances writes:

“Society has a seemingly insatiable capacity (even hunger) to accept and endorse newly minted mental disorders that help to define and explain away its emerging concerns.”

Yes–“explain away”. That’s the key verb if I ever heard one. Our society does not take responsibility. We love to blame others for our mistakes. Did your toddler fall into the gorilla pen at the zoo? Blame the zoo. Did you fall into a fountain while keeping your eyes glued to your phone as you texted while walking? Blame the mall. Do you have difficulty concentrating? You have a mental disorder called Adult ADD. And you need medication for it. How did Frances, the Chair of the Task Force for the DSM-IV, feel about the new edition?

“DSM-5 has just been published–not a happy moment in the history of psychiatry or for me personally. It risks turning diagnostic inflation into hyperinflation–further cheapening the currency of psychiatric diagnosis and unleashing a wave of new false epidemics.”

Frances maintains that there is no magic pill for our mild mental ills. What we might be experiencing as depression, anxiety or restlessness is just a normal part of the human condition. We will get over it on our own. He maintains that sure, we should monitor ourselves, but there is no need to rush to a doctor to get a prescription just because we’re feeling under the weather. And there are millions of Americans who are now feeling under the weather all the time. Ironically their unnecessary prescriptions are making them less healthy. They have developed addictions to these drugs and deleterious side effects such as obesity, one of the most common consequences of psychiatric medication. And sadly, they are not getting the psychiatric help that they need. And that really is all they likely need: consultation with a psychiatrist and not a prescription. Frances cannot stress this enough in Saving Normal, that psychiatric care is all too often denied those who need it the most. An overwhelming number of patients on some kind of psychiatric medicine obtained their prescriptions from their primary care physician (PCP). These doctors, Frances maintains, are too rushed and above all too inexperienced to diagnose a psychiatric disorder. They are all too willing to write a prescription, often for a drug the patient himself asked for, and shoo the patient out of the office:

“The inevitable result has been diagnostic inflation and massively excessive medication use. It makes absolutely no sense to do most of our psychiatric diagnosis and treatment in primary care settings. Accurate diagnosis requires expertise and simply can’t be done properly in the seven minutes most PCPs now get to spend with patients–especially when the patients have been primed by false advertising to demand the wrong thing. Overprescription of psychotropic medication by PCPs has become a serious threat to public health, but has pushed Pharma revenue through the roof. There is almost never a justification for the use of antipsychotic and antianxiety medication in primary care, but it is done all the time.”

Drug companies are calling the shots; they’ve out-Trumped the media on an NRA scale. How can you convince people that they’re not sick at all, when:

“With an assist from an overly ambitious psychiatry, all human difference is being transmuted into chemical imbalance that is meant to be treated with a handy pill.”

Frances filled Saving Normal with chapters on psychiatric fads of the past, present and future. We can relive witch hunt hysteria, multiple personality disorder (diagnoses of which went through the roof after the movie “Sybil” came out in 1976) and the most recent tragic fad, that of ritual satanic abuse in American daycares. The chapters on the present fads was most interesting, especially the sections entitled “Attention Deficit Disorder Runs Wild” and “Autism Becomes Fashionable”. Frances got it right with that one: parents cart out their fashionably autistic children on talk shows half expecting the studio audience to throw them coins in a bucket.

In spite of the psychiatric doomsday the DSM-V brings, Frances is cautiously optimistic that we will not end up drugging the entire population in Huxleyan soma. The solution to the current state of hyperdiagnosis is not to be in such a rush to find a solution:

“The lesson for me was that diagnosis needed to rest in order to let research catch up. It made no sense to keep rearranging the furniture of descriptive psychiatry, creating new diagnoses or altering the thresholds of existing ones, based only on the whims of the experts who happened to be in the room.”

Indeed. Dump the drugs, put your cellphones down and go outside. Kids, adults, everyone: get some exercise. Frances–as well as science–make the case for improved attention spans and relief from depression simply by weaning yourselves from your phones and electronic devices. Unplug yourselves, or you will truly be foolish people.