On Saturday night after I sent my first travelogue I left to go book shopping. I picked up six books at the largest Eymundsson store on Austurstræti. One quick note about my lack of accents on the Icelandic letters. I am unable to type them on this laptop, and if I cut and paste them into the text they are not in the same font and it throws the rest of the text off balance, so I am resigned, unfortunately, to leave the accents off, as well as all the special Icelandic letters. Thus the -ae- in the street name listed above should really be an aesc, and I will not be able to type thorns and edhs at all. [Edit: I have added all the Icelandic letters and removed the Latin alphabet substitutes for all travelogues from this trip.] At Eymundsson I bought three books for myself. Two were about the island Surtsey, which was created in 1963 by an underwater volcanic eruption. Mark and I hope to take a boat tour around Surtsey when we visit the south of Iceland and the Westman Islands (known in Icelandic as Vestmannaeyjar). One cannot land on Surtsey, but boat tours are available. The third book I got was a large Icelandic-Faroese unidirectional dictionary. I enjoy comparing related languages and I debated a long time whether or not I should get this (as it was a hefty 6805 ISK) yet I kept coming back to thumb through it. I don’t always buy these dictionaries, as I have minimal need for them, yet as an armchair comparative linguist I do enjoy flipping through and seeing how the two languages say things. I recall I declined purchasing two pocket dictionaries when I was in Amsterdam because I thought the Dutch-Frisian and Dutch-Afrikaans languages were a tad too similar. The three other books I got were for friends who gave me wish lists.

Since it is so soon after the summer solstice, and we are also at the 66th parallel, it is as bright as day at midnight. There is no night here, and one can easily lose track of time thinking nightfall was still hours away.

We saw three concerts on Sunday. The first two were at Harpa. “Pearls of Icelandic Song” was one hour long and featured excerpts from nineteen songs throughout the Icelandic classical oeuvre. The vocalists were Eyrún Unnarsdóttir as mezzosoprano and Fjölnir Ólafsson as baritone, with Matthildur Anna Gisladóttir on piano. Hearing only excerpts of songs was fine, and we learned about a lot of composers we otherwise would never have been introduced to.

After the concert we made enquiries if we would be able to take a look inside the main concert hall, without paying the hefty 1750 ISK tour fee. We just wanted a peek inside, nothing more. The box office ticket agent, perhaps knowing that we had just come from the “Pearls of Icelandic Song” concert, gave us permission to attend the final hour of the concert by the Youth Philharmonic Orchestra from the New England Conservatory preparatory school that was currently in progress in the main concert hall. So we had permission to crash the last hour, plus its fifteen-minute series of encores.

We had heard around the city that a special concert was going to be held in honour of the 35th anniversary of the election of President Vigdís Finnbogadóttir. Vigdís served as president from 1980-1996 and was the first elected woman president in Europe. Mark and I gathered directly in front of the stage, off to the side a little, and saw musical performances by many local acts, who did two songs each. I liked the male singing group Baggalútur, and I was so surprised to see Faroese singer Eivør Pálsdóttir onstage. I recognized her immediately. I own two of her albums!

What Mark and I could not comprehend, even as Canadians living in our safe cities, was the total absence of visible security on site. The former president sat on a small elevated gated platform, yet if anyone wanted to approach her, he could. We watched cyclists ride immediately in front of her and one child even threw a rock at the platform, which was just her innocent childish attempt to see if she could hit a supporting beam. The child had a perfect shot, and the ding rang out for all to hear, but no one panicked, thinking that Vigdís was under attack.

Vigdís, looking far younger than her 85 years, gave a speech after. Just for the record, all the speeches and the banter between songs was entirely in Icelandic. I took many photos of the former president since I was so close, and in the backstage area, separated by only a single piece of police tape, I also took some photos. I have included the most photogenic shots.

I am finishing this travelogue now as I take a break from a heavy day shopping where I walked and sweated around a sunny Reykjavík this Monday afternoon. I had to go back to the hostel to dump all the stuff I bought: so many CD’s and second-hand books can get quite heavy. When I get home I will of course write another post about my latest Iceland book run, which will include scans of the covers. I will have to tell Mark where I found cheap postcards. Don’t all you worry about the quality of card I’m going to be sending you. They are thick and glossy cards, yet it pays to look for the shops that sell them for up to 25 ISK cheaper than other merchants.

I am going out again after I post this, and this evening Mark and I are seeing a movie, “Vonarstræti” with English subtitles, part of a summer series to introduce foreigners to Icelandic film. 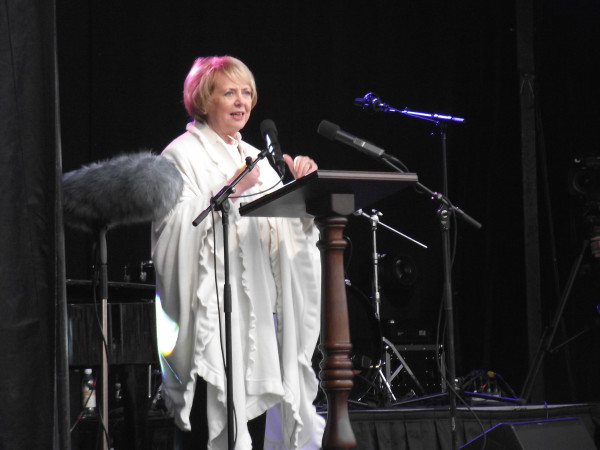