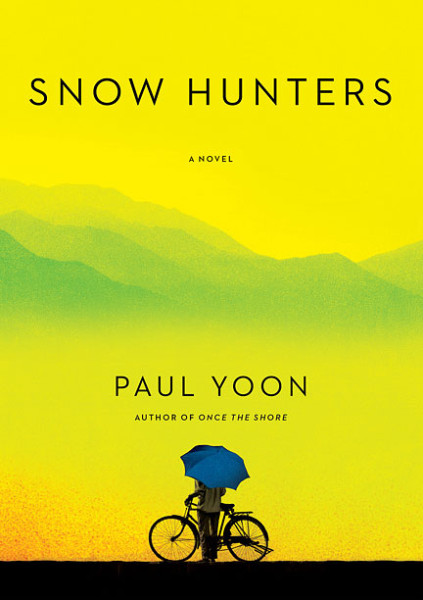 Snow Hunters by Paul Yoon was a brief novel told in 196 small pages. I was interested in it because its subject classification was “Refugees–Korea (North)–Fiction” yet it was not the typical Korean War refugee story I was expecting. I had the feeling it wouldn’t be, since the prose was so sparse. I am not a fan of brief sentences and short chapters in fiction. When I examined the book I feared it might even be in the form of poetic prose like By Grand Central Station I Sat Down and Wept (a novel, which, by the way, I did not enjoy in the slightest). To my delight, Snow Hunters was not written in poetic prose. Brief novels written with such care and beauty are not necessarily fast reads, and it took me four days to read Snow Hunters.

It was a pleasure to read about Yohan, a North Korean defector held captive in the South. He was accepted by Brazil as a refugee and starts a new life in the company of a Japanese tailor named Kiyoshi. Yohan earns his living mending clothes yet spends most of his time to himself, not even speaking more than a few words to Kiyoshi. He is enamoured with two children who come and go throughout his life. Sometimes they staying only briefly and sometimes they linger the entire summer. They provide a sense of stability and focus for Yohan. He can feel that they will never abandon him, unlike the general refugee experience where one is displaced by war.

Yoon kept his sentences brief yet his story was full, and at times his imagery was powerful. I took note of the following three examples:

“One winter evening, in a railroad car heading south, his face had been like all the faces, worn and unrecognizable. His eyes like all their eyes. Their shoulders bumped. And then he took his helmet off and the moonlight caught the gray stripe in his hair.”Yohan had nearly reached for it, as though it were the warmth of a fire…”

“The boy would chase her around the street, carrying the foil wrapper of a chocolate bar, which held the sunlight as though his fingertips were on fire.”

“A field of stars opened above him. The breath of sky. A path of lights on the ocean’s surface; and the hill town to his left, all its windows like a blurred image as though another ocean were there, another body of water, draped across the high slope.”

After I read each of those quotations, I paused and reflected on the beauty of each simile–notice how each passage used the same structure incorporating “as though”–and I reread the paragraphs they came from to appreciate the picture Yoon created.

The story ends with a visit by the girl visitor, Bia, who is now an adult. Yohan reflects upon his life and is happy and thankful that Brazil took him as a refugee and found him employment.