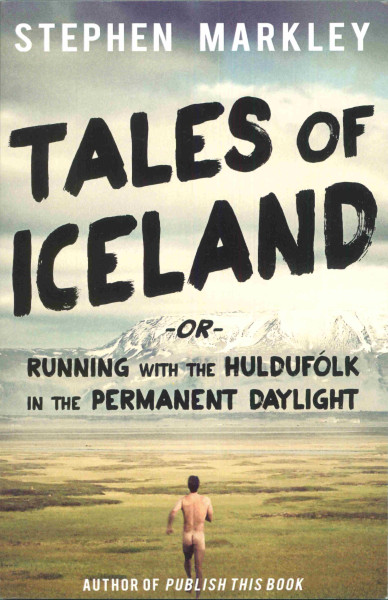 Tales of Iceland -or- Running with the Huldufólk in the Permanent Daylight by Stephen Markley is the story about the author’s adventures driving around Iceland in 2012. He travelled with two friends in a rental car, three years before Mark and I made the same trip, however I didn’t acquire or even know about this book until Christmas 2017. I definitely recognized the same sights and surprises of this wondrous island. For a self-published book Markley had it formatted correctly and attractively. Unfortunately there were no photos, but the author provided a link to the book’s own website so the reader could see some of them. They also included plenty of shots of the travelling trio. From the start Markley pointed out that his Tales of Iceland was not a typical guidebook. It was more an irreverent travel diary than an opinionated book of advice of do’s and don’t’s.

I found Markley’s writing style more like an oral presentation, with countless bolded paragraph asides that broke the fourth wall. I could picture the author on stage showing photographs of his trip in a travel presentation and breaking with his narrative to address the audience on some (un-)related topic. The written representation of his trip thus looked like a transcript of the inside of his head. Markley didn’t hold back on anything, and that included foul language and sex talk. This came as no surprise. The reader knew what the author was getting into since the book and its website offered the subtle warning “just know that it will be a little foul”. So be prepared for an abundance of F-words and, with three young travelling men surrounded by gorgeous Icelandic women all the time, a lot of talk about sex and their (the guys’) intimate parts of their anatomy. I am no prude yet I found all the swearing tiresome. I am of the belief that while swearing as a form of language does have its purpose in literature, it is often used as an easy way out to avoid verbalizing the intensity of its purpose. Why bother expressing your feelings of frustration when a simple four-letter F-word will do?

Aside from recognizing the same sights as I relived my own trip circumnavigating Iceland, what I found especially comical was that both the author and I also recognized the same people during our travels. Now not the same exact people, obviously. Consider that Mark and I weren’t the only ones making a round trip along the Hringvegur or Route 1, and as we checked in at each new hostel after another day’s travel we would often–no, always–see some people whom we had encountered earlier on. We’d meet that Dutch couple in the hostel’s kitchen or that young Australian guy who was hitchhiking. It was fun to chat, albeit briefly, with fellow travellers who were making the same circuitous trip as we were. Markley was no different.

And speaking of hitchhiking, Mark and I certainly saw a lot of people out thumbin’ a ride [1]. Markley knocks them down a peg for being counterfeit bohos (you’re young and can afford to buy a plane ticket and live in this expensive country yet you’re hitchhiking?) however his heart was all aflutter at the sight of two attractive young women at the side of the road:

“Weeeellll it turns out if two pretty French girls ask you for a ride instead of two lanky Americans, your opinion of hitchhiking improves dramatically. Suddenly you’ll discard whole boxes of presents intended for your family as well as much-needed medicine like insulin in order to cram the two of them into your i20.
“Such was the case with Muriel and Ombeline, two tall, striking girls from Paris for whom we sat like chickens in factory farm cages for two hours so we could listen to their French accents.”

If you look at a map of Iceland, you will notice that it is covered with white spots. When I was a child absorbed with maps I didn’t know what that meant. Markley related his fascination with glaciers (those spilled Liquid Paper blotches):

“I’m something of a glacier nerd, so allow me to explain: Glaciers are fucking cool. Glaciers are hydrology and beauty and timespans that are impossible to conceive. They create rivers and lakes and drinking water. They are vast landscapes of pristine white that look like a block of the world went missing, whited-out by an editor.”

Since this is admittedly not a guidebook I would recommend it for those who have already been to Iceland. Without photos it would need your vacation memory to fill in the blanks. It was a rapid read since I was eager to travel along to the next town, sharing the same awe of the Martian landscape and amazement that the transportation ministry could think it unnecessary to install guardrails along hairpin turns for night drivers.