Tasmanian Tiger: The Tragic Tale of How the World Lost its Most Mysterious Predator 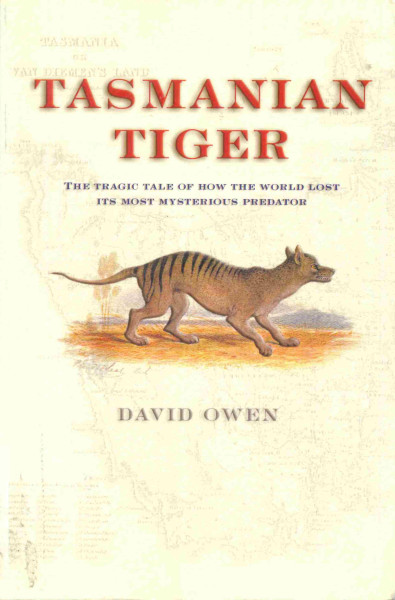 The Tasmanian tiger became extinct in 1936. While not a tiger or a feline at all, the Europeans who colonized Tasmania gave this striped marsupial predator its name because it resembled a creature they already knew. Zoologists prefer to use the term thylacine, as do I, so I will refer to it by that name. Stories of extinctions always sadden me, whether we’re talking about animal or language death, and the case of the thylacine saw an entire species almost wiped out within a century. Tasmanian Tiger: The Tragic Tale of How the World Lost its Most Mysterious Predator by David Owen from 2003 tells the story of man’s misperception of this gentle creature which served as the scapegoat for his ignorance.

European settlers who emigrated to Tasmania introduced chickens and sheep to the island. These were invasive species and not the thylacine’s usual prey–they preferred to hunt wallabies–yet the thylacine was blamed for attacks on chicken coops and sheep pens. There was no evidence that thylacines preyed on these introduced species, yet settlers in a strange new land populated with strange new creatures saw them as the culprits. That the thylacine looked (albeit remotely) like a predatory cat or even a wolf sealed the connection. In almost all cases it was dogs, either the domestic dingo or the pets of the settlers that preyed on chickens and sheep. The thylacine’s fate was unfortunately set for doom when the government set bounties on their capture, dead or alive. Bonuses were paid for mothers who still had cubs in their pouches:

“Thylacines were neither pest nor vermin but simply a perceived obstacle to nineteenth-century progress. And, whether snared or shot, they were also a source of bounty income.”

Although the bounties generated a vast increase in thylacine corpses and skins, the number of attacks on chickens and sheep didn’t appear to diminish:

“A second bounty scheme began in 1840–but again, the records give no real indication that either the bounties or the tiger men were necessary at all, and the suspicion must arise that invented or greatly exaggerated ‘ravages’ of ‘savage’ thylacines against the flocks conveniently masked the true nature of the Company’s pastoral failings.”

In other words, would-be shepherds who had failed in their endeavours tried to cover up their shortcomings by blaming the “savage” predator known as the Tasmanian tiger. The thylacine became a convenient scapegoat for man’s inability to tame the wilds of Tasmania. Thylacine scholar Robert Paddle notes that:

“‘at no stage in any of the official annual reports on the state of the [sheep] industry during these crucial years was the thylacine mentioned even as a minor problem of significance to sheep farmers’.” (bracketed text in original)

Thus the authorities knew from these reports that thylacines weren’t decimating the flocks, yet still they continued to offer bounties on their bodies. Meanwhile, the real predators continued to attack.

In the early twentieth century conservationists began to take notice, and zoos especially wanted thylacine specimens in their menageries. Zoos were offering more money for a living thylacine than the Tasmanian authorities were, so trappers caught the animals and shipped them around the world. As the last living thylacines were leaving the island, the government sat back and let it happen. They only wanted the animal eradicated:

“The animal was neither pest nor vermin but was singled out of its environment for the apparent economic betterment of the few, by a conservative mindset demanding the continued conquest of wilderness. That Tasmanians were unable to save it from extinction–that they did not even try until well into the twentieth century–eventually spread an enormous pall of guilt, regret and sorrow.”

There was no legislated protection on the books until the animal was on its last legs–and if there was ever a more literal statement, that’s it. For once the conservationists finally got their thylacine protection law passed, the animal had only limited time. Legislation could not possibly have saved it. However, enter the twenty-first century, and a new saviour awaits: cloning. Fetal thylacines which had been preserved in ethyl alcohol have been used in experiments to try to revive the species. The chance that thylacines will once again roam Tasmania seems remote and the odds are definitely stacked against it. Since reading this book but before writing its review I have conducted some of my own research on thylacine cloning and the time quoted for the first thylacine clone seems a gross overestimation in optimism:

“Begun in 1999, the [cloning] project, with museum director Mike Archer at the helm, aims for a successful completion by 2010.”

I am not confident that thylacines will ever be cloned, even though some of their DNA had been extracted from the preserved fetuses. I am of the belief, which Owen raises, that when faced with the possibility of cloning a species which humans have rendered extinct, humans should leave the species extinct.

Tasmanian Tiger was an exciting read, and I am happy that Owen devoted chapters to the prehistory and later European settlement of Tasmania. We learned how the thylacine got to Tasmania and how its Australian ancestors became extinct as well. Owen wrote about marsupials in general and how they found home as well in North America. The story of the thylacine could not be told without also telling the story about the colonists and their campaign to eradicate it. A chapter was devoted to thylacine sightings, and while optimistic–the scientific consensus is that the last thylacine did not die (in captivity) in 1936 and that there were probably small pockets of thylacines still roaming the wild for a good ten years after–since there have been no confirmed sightings or evidence of the creature for some eighty years, the thylacine is definitely extinct.