The 13th Gift: A True Story of a Christmas Miracle 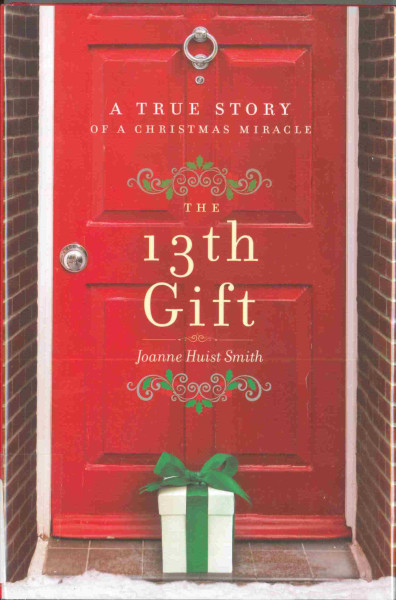 The 13thGift: A True Story of a Christmas Miracle by Joanne Huist Smith is the feel-good easy-read Christmas story I needed after spending six weeks with Jane Jacobs. I had brought both this book and The Death and Life of Great American Cities by Jane Jacobs to Halifax, hoping finally to finish Cities and start The 13th Gift before Christmas. Smith lost her husband suddenly to an unforeseen heart ailment, and The 13th Gift is the story of her family’s first Christmas without him. I myself am dealing with my first Christmas without my mother, so I was hoping to start reading this book before Christmas and not after the holiday. Amid all the Christmas preparations I was happy to find the time on Christmas Eve to start, and practically finish in one sitting, The 13th Gift.

Smith is the mother of three children who were between the ages of ten and seventeen when the story took place in 1999. She, more than her children, was dreading the approach of Christmas. The music, the shopping, the crowds and the universal happy mood all were too much to deal with when all she could think of was her dear husband Rick:

“I absolutely understand Scrooge now. I want to go to bed tonight and wake up on December 26.”

While Smith was preoccupied with the quick coming and going of Christmas, hoping at least to give her children a happy day while leaving herself out of it, a daily succession of twelve gifts arrived at their front door. Accompanied by notes set to a verse like “The Twelve Days of Christmas”, the gift-givers left Smith and her children small surprises like one poinsettia plant, then two days later three rolls of gift wrap, followed by eight cookie cutters then nine candles. Over the course of twelve days the Smith family grew to anticipate each gift, wondering when it would arrive and always wondering who the mysterious gift-giver was. The Smith children even camped out and devised various spying techniques to catch the givers in the act. These twelve days provided everyone with a festive distraction from the grief of losing their father or husband. The twelve gifts were not expensive, yet the response they generated was priceless. The Smiths were given the gift of joy, and an anticipation of Christmas when they would receive the twelfth and final gift.

The thirteenth gift in the title pertains to learning the identity of the gift-givers. The Smiths did not learn who these people were until thirteen years after their act of generosity, yet I won’t be spoiling any part of the story by revealing that the family who secretly dropped off twelve gifts at the Smiths’ door was in fact not the originator of the deed. The Smiths’ gift-givers were themselves the recipients of twelve mystery gifts after they had endured a family tragedy. That family learned to overcome its grief and restore joy in the Christmas season when the various members discovered their own twelve gifts, and provided joy to many other families in addition to the Smiths.

The 13th Gift was a joy to read over Christmas, providing a quick pick-me-up and enhancing my feel-good spirit.