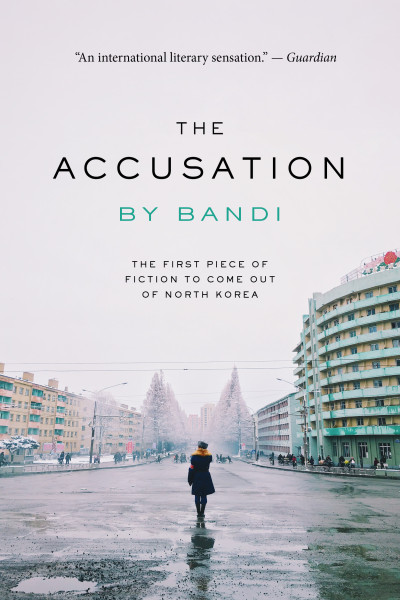 The Accusation claims to be “the first piece of fiction to come out of North Korea”. It is not. I purchased novels and short stories in English translation when I was in the DPRK in 2011. Better put, The Accusation is probably the first work of fiction by a North Korean author still living in North Korea but not published within the country itself. Its author, using the pseudonym Bandi (which means “firefly” in Korean) managed to get others to smuggle his stories out. The story about Bandi’s writing in secret and how he got his short stories out of the country is told in a suspenseful chapter at the end of the book. His work was translated by Deborah Smith.

This work is a collection of seven short stories, most of which have a common thread: an accusation of some sort. In North Korea, accusations usually have life-altering consequences. The themes within these stories are common in defector memoirs: the tiniest innocuous slip can turn into banishment to the countryside or even death. People spend their lifetime fearing unscheduled knocks on doors and second-guessing their speech for nuanced misinterpretations. Bandi’s stories are fiction but could have been lifted from any memoir of a DPRK escapee.

I was so moved by Bandi’s gift for simile that I reread all the passages below before I continued with the story. When I like a good line in fiction, I reread it:

“The laughter had acted as a coarse sieve. straining out her niggling concerns until all that was left was sheer brazen nerve.”

“One by one, columns began to form in the square, neatly divided like blocks of tofu. Each column accumulated new blocks in rapid succession, as though the phrase ‘without exception’ were a long steel spit pushing through the city, skewering people in bunches and delivering them promptly to the square.”

“Looking out beyond the window, its glass blurred by a solid stream of rainwater, they see the trailing tendrils of a gnarled old willow whipping through the air like a nest of snakes.”

Bandi’s imagery was filled with cursed negativity. DPRK censors would never release a work–even of fiction–with such an unflattering portrait of their country. Barren landscapes stripped of all vegetation, landslides, and people scrounging for food in the hills featured in some stories, which tells me that they were written at the time of the great famine. Even birds were cursed creatures:

“On the mountain behind the village, a cuckoo crowed, crying out as if it were choking on a clot of blood.”

Bandi captivated my attention with his description of a husband rendered transfixed by reading his wife’s diary. In a nation of secrets, where the capacity to keep a secret may be the difference between life and death, the husband learns about his wife’s hidden life. It also provided the introduction to another simile:

“This diary in which my wife had recorded two years’ worth of incidents and feelings, albeit frequently skipping days. I didn’t simply read this diary; it hauled my gaze across its pages, my mind on a knife-edge, so that even granting the speed with which I raced through it, the words felt imprinted on my memory, like a photograph.”

Fear coats the esophagus of each citizen, where each swallow could turn into a lethal choke. Forced deportation could happen to anyone at any time. When the authorities came for you and your family, at least they were considerate enough to pack you a bag when the car pulled up outside your house in the middle of the night:

“‘You know, if anyone ever found out that my husband and I smuggled this file out for you, the verdict would be just the same–Class 149. It means the Party considers you a traitor. Our whole family would be deported according to Government Resolution 149, and persecuted for generations.’
“Class 149! I cringed to hear it spoken out loud. Those words were enough to strike terror into any listener. Even the seal used to stamp the document seemed not some innocuous wax stick but an iron brand, heated in flames and seared indelibly onto the rumps of livestock.”

Writers, whether poets or journalists, had to toe the party line and their creativity with words rarely saw an outlet. Bandi bemoans the state of the North Korean press:

“Eventually, he decided that he had no other choice than to knuckle down, amend the article so that the praise was meted out as the Party demanded it be, and submit it to the newspaper, all the while heaping curses on the field of journalism which he had been unfortunate enough to enter….”

After the deaths of Kim Il Sung and Kim Jong Il, foreigners reacted to the scenes of national mourning, which often involved mass wailing and citizens harming themselves, with incredulity mixed with eye-rolling laughter. How could an entire nation go berserk with tears? Come on, it’s obvious everyone is acting! However Bandi wrote about how the authorities would monitor people’s mournful reactions and record the number of times they laid flowers at the altars to their deceased leaders. Employees would have to take turns keeping vigil outside workplace altars. If you missed a shift or weren’t seeing crying or self-flagellating in grief, you were suspected of not caring enough. Bandi offers an explanation:

“Where emotions are suppressed and actions monitored, acting only becomes ubiquitous, and so convincing that we even trick ourselves. Look at all these people, sobbing over a death that happened three months ago, starving because they haven’t been able to draw their rations all the while. What about the mother of the child bitten by a snake while he was out gathering flowers for Kim Il-sung’s altar? Perhaps she finds her private grief useful for shedding public tears. Isn’t it frightening, this society which teaches us all to be great actors, able to turn on the waterworks at the drop of a hat?”

The Accusation was a rapid read and an excellent translation. It however offered nothing new as I have read the same themes in many memoirs from DPRK defectors.