The Atoms of Language: The Mind’s Hidden Rules of Grammar 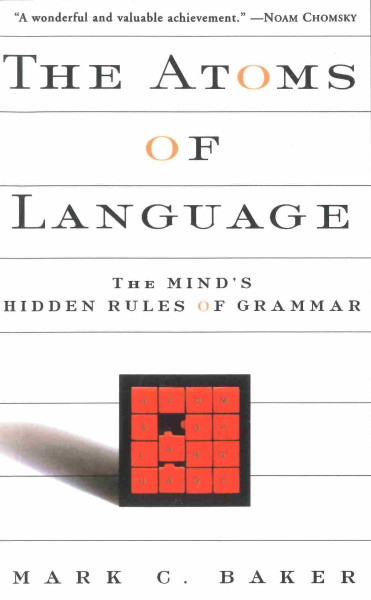 The Atoms of Language: The Mind’s Hidden Rules of Grammar by Mark C. Baker had me hooked from the blurb on the back cover stating:

“Languages whose grammars seem completely incompatible may in fact be structurally almost identical, except for a difference in one simple rule.”

Baker backed up this statement with a presentation of various parameters which distinguish one language from another. Thus two languages which may seem wholly dissimilar in form may in fact be identical in all but one parameter. I found the initial discussion of these parameters highly interesting, where English and French are compared and even languages such as Japanese and Mohawk might share more similarities in terms of structural grammars than they do differences. Baker spent the first part of Atoms writing about another North American indigenous language with his history of the Navajo Code Talkers of World War II. I am very interested in the First Nations’ languages thus I soaked up all the information about Navajo and Mohawk, such as:

“It is yet another instance of Mohawk’s polysynthetic nature, in which grammatical relationships are expressed by building complex words rather than complex sentences.”

Thus Mohawk words could be of colossal lengths, each word translating into a complete sentence in English. I would love to study an indigenous language such as Mohawk, and Baker gave a very detailed outline of its rules of word formation and agreement rules.

The main focus of Atoms was to discuss various language parameters such as those dealing with head directionality, null subject, or serial verbs and how they are applied to some languages and not to others. While the initial discussion of these parameters captivated my undivided attention, the belabored labeling of some of them and the repetition of some mouthful terminology quickly grew to be a tedious read for the eyes.

What I found most interesting in Atoms was the discussion about word order, such as Subject-Verb-Object, and the various combinations one can arrange the letters of SVO to find corresponding languages of the world. When I studied Breton I was surprised (as well as delighted) to find that it was one of the rare 9% of all languages that had a Verb-Subject-Object word order. Baker discusses the rarest forms, those with VOS order (3% of all languages), OVS order (1%) and OSV (although it remains debatable whether any languages with that word order exist).

Baker raises a valuable point explaining why it is not possible to pick up a language merely by listening to it. One cannot achieve aural comprehension–much less according to this myth attain total fluency–only by surrounding oneself with speakers of that language. For example, Baker discusses the medium of television:

“Why does television, which we consider such an effective teacher of violence and materialism, fail us in the simple task of teaching language?”

“It is impossible to listen to someone speaking a language that you know and notice the grammatical structure of their sentences but not attend to their meaning. Intentionality is probably also crucial to language acquisition. Children will pay serious attention to a language and make progress in cracking its code only if they have some access to what the sentences that they hear mean, in the form of interactions between them, the speaker, and their shared environment. This is where a language-rich but interaction-poor medium like television fails: It does not provide a young child with enough salient clues as to what the blips on the screen are talking about or why we should care.”

The Atoms of Language is a highly specialized book on linguistics; an academic read on the structures of the world’s grammars. I usually find these books intensely interesting but was not moved to gush over these pages about parameters.