The Basque Country: A Cultural History 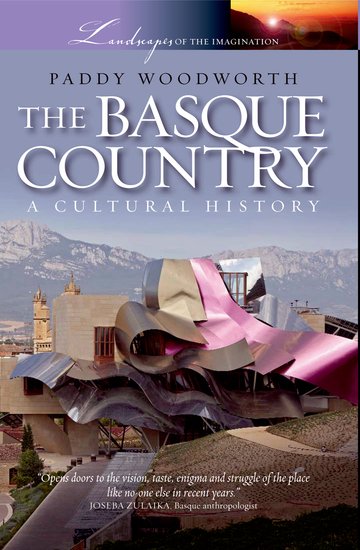 As a lover of world languages I embrace all things Basque, and would love to immerse myself in a Basque language course as I did with Finnish, Romansch and Breton. I studied each of those three languages in locations where they are still spoken as everyday languages (although I admit finding Finnish courses in Finland was rather easy to arrange). If I ever study Basque it would have to be in Basque Country, or Euskal Herria. I would be in language heaven, yet after reading The Basque Country: A Cultural History by Paddy Woodworth, I would have a tough time deciding where to study: in the Basque Country of Spain or France? Woodworth makes attractive cases for both regions.

Basque is a language isolate, and is the oldest language of Europe. How did the Basques settle and where did their language originate? I had to chuckle at the opening lines of chapter two:

“The origins of the Basques, and of their language, Euskera, are at once enticingly mysterious and politically contested. This has been a complex combination, and at times a lethal one. A vacuum of hard evidence has sucked in a deal of lunacy.”

Woodworth didn’t deal with any of the lunacy, but debunked claims of the language to Neolithic or Stone Age origins. Book chapters dealt with the frontón and pelota, gastronomy, music, fiestas, Basque politics and the ETA, and “The Basques on the Other Side of the Mountains” = the French Basques. Basque literature was one of my favourites among the fifteen chapters. Bernardo Atxaga, undoubtedly the most famous Basque author of international renown was cited throughout the book and more so of course in this chapter. I read Atxaga’s Obabakoak before I started to write book reviews and I recall seeing a beat-up Basque edition at Schoenhof’s during my last visit. Woodworth wrote about many more Basque authors whose names I have recorded for future interloan requests or Abebooks purchases.

While a joy to read for those who love Basque culture, I found that my notes were dominated by references to check on-line for photos. Woodworth unfortunately only included a few black and white photos with the text, and dark ones at that. I don’t have a cellphone to Google for photos as I read, so I had to wait till I got on-line to find out what some buildings and places looked like, such as the parish church of San Salvador in Geraria, which is described as:

“…so much in the building, from the floor to the obscure complex of arches that makes up the roof, is tilted, uneven, askew. But the curious architectonics of the church are due to something much more deliberate, and much more radical, than awkward location and idiosyncratic workmanship. Move right around the building and you will often find elegant curves, but rarely be offered a straight line.”

The Basque Country wasn’t the first book I had read about the Basques but it was, thankfully, the least sensational. The most striking observation I found wasn’t about the Basque past, but rather the present. Woodworth, in exploring the shops that dot the French Biscay coast, lamented the kitschy nature of merchandise. Both the Spanish and French sides realize that Basqueness is marketable and a selling point for tourists who like a “Basque experience” in B&B’s and at restaurants, yet in France the stores go overboard with tacky souvenirs. Granted, the French side of Basque Country encompasses the Biarritz beach resorts, yet the shopping experience must nonetheless be a disappointment. I wonder if Woodworth had the same impression that I had when I first visited Amsterdam: every fridge magnet in every souvenir store depicted either a marijuana spliff or a lady of the evening. It was an effort to find a magnet not associated with sex or drugs. When compared to the kitschy French side, Woodworth noted in Spain:

“…you can scour the streets of the old part of Bilbao and only find a single shop selling Basque souvenirs. Even in that one shop, they take third place, after suitcases and belts in the window display.”

There were a couple grammatical errors in the text, most of them caused by missing words. However I did encounter the nonword empherality on p. 133, when Woodworth likely meant ephemerality. Woodworth included three pages of further reading resources, and I have already copied the titles by Basque authors.