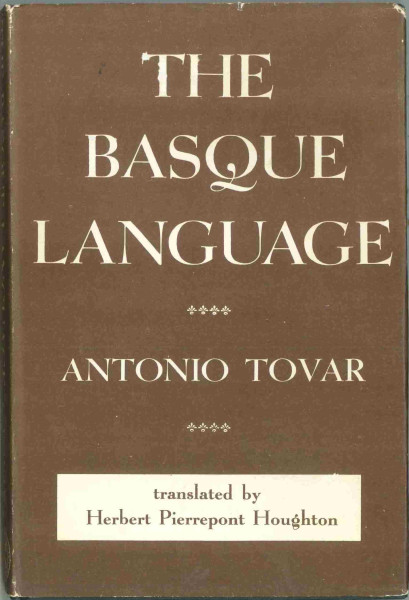 I have many books and grammars about the Basque language. After my studies in Finnish, Romansch and Breton I would love to go to Spain and immerse myself in an intensive Basque course. I have already read much about the language yet hadn’t bothered to read this little book, an eBay purchase from several years ago, until now. The Basque Language by Antonio Tovar (translated by Herbert Pierrepont Houghton) is the second edition from 1957. A slight book of only 112 pages, it was not, as its pagination might indicate, an introduction to the language but rather a deep linguistic analysis covering topics such as phonetics, morphology and vocabulary, yet, ironically, only devoted a couple pages to each topic. I liked the final chapter devoted to the various Basque dialects spoken in Spain and France. In spite of the stated target audience, those who “[possess] no knowledge of the language”, this book presumed an already highly educated Basque student as its reader base. Its other target audience, “those who, being Basque by birth, know their language fairly well, but perhaps without any scientific orientation” would equally be left in the dark by the non sequitur arrangement of topics and in-depth linguistic analyses within altogether too brief chapters. I am quite capable of understanding linguistic texts yet since Tovar covered so many topics in such specific detail on so few pages, secondary- or even elementary-levels of the language and its grammar were left out. I often wondered why Tovar was discussing a certain topic when less advanced grammar rules hadn’t even been covered yet. I am glad though that I read The Atoms of Language: The Mind’s Hidden Rules of Grammar before this book, because what I learned in it about parameters, and how they are applied to Basque, helped me understand Tovar. Nonetheless, this was still a very slow turn of pages, and it took me five days to get through The Basque Language.

Basque is the oldest language of Europe, and is believed to be a pure linguistic isolate. Tovar tried to link it with the Caucasian languages such as Georgian, and did make a case for it, however not even once did he link the two languages’ ergativity. Unfortunately most of the book was a boring read without much of an explanation for its sudden jumps to short yet extremely detailed linguistic analyses. There were however numerous passages I felt worthy to quote and I will present them below. For students of language and linguistics, especially non-Indo-European languages and language isolates, Basque is a must. The following quotes display the chauvinistic Eurocentric attitude from the 1950’s, as well as the consensus about Basque that is held to this day.

I was awestruck by Tovar’s remark near the beginning of the book:

“There seems to be something that apparently prevented Basque from being early converted into a written literature. Its primitive characteristics were doubtless a great inconvenience, and were potent in preventing its development.”

He seems to be saying that the clumsy Basques couldn’t devise a writing system because their language was so old. And primitive? What a parochial opinion of a language so different from the author’s. Tovar seems to say that if it wasn’t for the Indo-Europeans, Basque wouldn’t have a written language at all. So Basque is still “conquered”, in that sense.

Romansch in Switzerland has survived because of its isolation, with small communities hidden away in the Swiss Alps. Likewise, Basque has survived because another mountain range, the Pyrenees, kept the invaders away. Perhaps Tovar implies this with his remark about the Basques living outside the Kingdom of the Visigoths:

“Despite these circumstances, the reason for the wide preservation of the Basque tongue may reside, as Caro Baroja maintains, in these circumstances: that the Romanization was not only incomplete, but it was interrupted; that Christianity was late in being accepted by the Basques; the fact that the Basques continued free and outside the Kingdom of the Visigoths, and proved the only survivals from Romanization, ‘ancient and interrupted.'”

and more reasons for the preservation of Basque among a linguistically turbulent Europe:

“The relative lack of communication in the Basque country is another cause of the retention of the pre-Romanic language. In our judgment, the reason that those peoples were the least Romanized of the inhabitants of Spain–particularly those in the North–is that the Basques alone spoke a non-Indo-European language. The Cantabrians, the Asturians, and the Galicians had been Indo-Europeanized, as we see clearly from their names for men and places; the affinity of their languages with Latin was, too, a favorable element in their definite Romanization. The Basque was instead a language totally different, which had resisted even the advance of various Indo-European invasions, and had maintained complete opposition to assimilation.”

From Tovar’s explanation of this view, I can imagine the Indo-European invaders finally reaching Basque country, only to be confronted, and confounded, by the new isolate language. Instead of trying to assimilate the Basques, or worse–murdering them all in a mass act of linguicide or language genocide–the invaders just couldn’t be bothered. Scared away not by Basque force, disease or poverty, the invaders left the Basques alone because they couldn’t make themselves understood.

Mark C. Baker’s The Atoms of Language was a great help in helping me understand the complexities of the Basque verb. Tovar spent far too little time analyzing verb construction and agglutination. Fortunately, I have plenty of other books on Basque to help me learn more. A couple passages below drew my immediate interest. After comparing Basque with several language families, Tovar concluded that Basque shared more similarities with the Caucasian languages:

“The Basque verb is the most difficult and original part of this language. In more than one of its features it coincides with the grammar of the Caucasic languages, although the comparative study of those tongues must be regarded as not sufficiently complete for drawing many safe conclusions.”

I am glad he added that last clause, since there is no conclusive proof that Basque, and, for example, Georgian, are from the same family.

Agglutination offers an incalculable number of verb inflections in Basque. The subject is tied to the verb, as is the sex, and in the type of verb itself (transitive or intransitive), as well as all object agglutinations. English has it easy with verb conjugations. When you learn French or German, you acquire additional verb endings. But in Basque: multiply all that by twenty. Although altogether too brief, Tovar did analyze verb roots, stems and mutations:

If the Indo-European invaders got fed up with making themselves understood, imagine how the modern Spaniard or Briton must feel when translating from the Basque:

“This clause [‘until the day of the resurrection of all the dead arrives’] also illustrates nicely the fact that in many Basque sentences the order of words is exactly the opposite of the corresponding English expression. Literally here we have ‘dead of all resurrection the day come until.’ So prevalent is this order of words, in contrast with our own, that it is very helpful, when attempting to translate into English a new and difficult Basque sentence, to begin at the end and work backward.”

This final paragraph sums up the highly inflective nature of such a “primitive” language as Basque:

“By this cursory examination we perceive that the elements which form the Basque language have undergone a very extensive historical development. The structure of the Basque verb might be analyzed, but only laboriously, and the phonetics of the dialects, very insufficiently studied up to the present, do not permit us to reconstruct with a sense of certainty all the forms that would be necessary to explain their operation. It is virtually beyond our powers of imagination to conceive how there were incorporated upon a primitive nominal base form–sometimes regarded as infinitive, again as gerund, or as participle–the different elements, such as prefixes, suffixes, or infixes, expressing subject, object, agent, dative, special reference to the one addressed, signs of tense and mood, as well as elements denoting the plural of many of these categories. The process of this organization connotes an extensive development and a very marked personality, which can be explained as due to extremely long epochs of isolation.”