The Beatles: The Authorized Biography 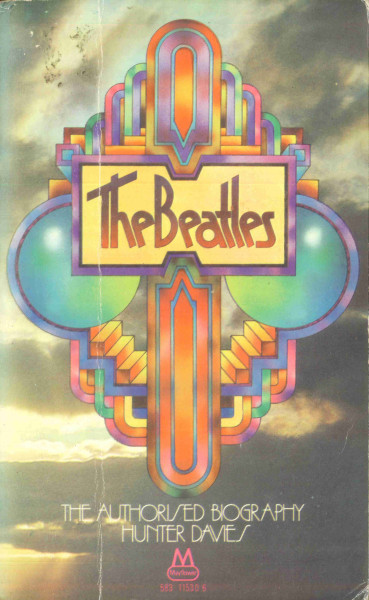 The Beatles: The Authorized Biography by Hunter Davies was published in 1968. The author had full access to all four Beatles and this remains their only authorized biography–all the more poignant since the Beatles were still a working group at the time. I read the American printing, hence The Authorized Biography. I made frequent referrals to my British paperback edition from 1969, thus The Authorised Biography. I found enough errors in the original 1968 hardcover to wonder if they had been fixed in the UK paperback (for the most part, they were). I recall buying the hardcover at the Chicago Beatlefest in August 1984.

After so many consecutive bad reads I was delighted to spend my time with The Beatles. This biography was packed tight with tiny print and narrow spacing between the lines. Biographies printed these days are pamphlets disguised as books. The read was substantial in its detail as Davies spoke to each Beatle as well as to close relatives like their parents, siblings, wives and girlfriends. This might be the only source where Paul’s former fiancée, Jane Asher, talks about her life within the Beatles’ inner circle. Each Beatle was covered in equal measure, so no short-shrifting George or Ringo. Davies provided generous quotations and incorporated them into the text so that the story flowed rapidly. The fast-paced life of being swept up by Beatlemania was not encumbered by a sloppy cut-and-paste job of inserted quotations. I consider myself a knowledgeable Beatles fan, and recognized this book as the source for so much Beatles knowledge. Revelations about their lives were initially found in this biography.

The book was a can’t-put-down read. I read it whenever I had free time and made myself time to read more of it. Davies did not write scandalously and rock star dirt didn’t drive me to turn the pages. However, what might be common Beatles knowledge now–that they took LSD and smoked pot–could have been considered racy news fifty years ago.

Davies had the propensity to state how much the Beatles paid for their own and their parents’ houses, yet the prices now fifty years on seem laughable. Did the Beatles move into shoeboxes? Although I read the American edition which had the smarts to change the spelling of one word in the subtitle to Authorized, the house prices were all quoted in pounds which didn’t help me understand how expensive they were (if they were at all). I don’t know how much the pound sterling was worth fifty years ago.

I do not care to précis the book since I know all about the Fabs during their formative years, their times in Hamburg and the Beatlemania years up till 1968. I would rather lavish praise on how well Davies wrote their individual and group histories, where single-member biographies easily fit into the collective group story. One didn’t jump around in a chronological mixup of Scouse personalities. At times I laughed out loud, as during this account of the Beatles’ first formal meeting with their future manager, Brian Epstein:

“John and Bob Wooller arrived at the appointed time at four thirty. So did George and Pete Best. But there was no sign of Paul. After half an hour, during which Brian was becoming very irritated, he asked George to ring Paul. George returned from the phone to say that Paul was in the bath. ‘This is disgraceful,’ said Brian. ‘He’s going to be very late.’ ‘Late,’ said George. ‘But very clean.'”

I can picture George’s look, his intonation and pacing as he said this. I know George’s voice as all the Beatles’ voices, and I read their quotations imagining their own voices speaking. Davies visited the Beatles at their homes and experienced down time when they were not in the studio. I was taken aback by how advanced we have evolved technologically. In 1968, a new invention must have been the object of envy at the home of Ringo and his wife Maureen:

“They both tend just to potter around when Ringo’s not working. Like John, they have pop records and the TV going all the time, even in rooms they’re not in. They watch TV a lot. They have six sets. From the main couch in the drawing room Ringo can change channels without getting up, just by operating a knob on the couch.”

The Beatles may have been too busy to exercise as we have come to know it in the twenty-first century. I chuckled at this description of their state of health:

“But the Beatles are somehow all fit, though rather pale-looking.”

This biography has been completely updated at least twice, and even the 1969 paperback had an updated discography. The 1968 edition did not mention Yoko Ono, although she and Linda Eastman are mentioned in a revised “End Bit” in the 1969 paperback. I would recommend it as essential reading for Beatles’ history up to 1968.

The Beatles is an authorized biography yet it still had a number of errors. Beatles fans however may not necessarily have known this at the time since fifty years have elapsed and so much more has been written about them. Yet still, some of the facts in the 1968 edition were just plain wrong, and would have been obvious to any fan. I am listing some of the errors out of comic relief, because I have to ask myself, “What was Davies thinking?”

At the beginning of the chapter about Paul McCartney, Davies wrote:

This was corrected to:

In Hamburg the Beatles befriended two artsy types who would become lifelong friends:

“But Klaus Voorman and Astrid Kichener did.”

Pity Davies got both of their names wrong. Fortunately it was corrected in the paperback:

“But Klaus Voormann and Astrid Kirchherr did.”

When Brian Epstein first saw the Beatles in concert at the Cavern, the 1968 edition says:

“His first visit was the lunchtime session of November 9, 1962.”

That didn’t seem right, especially since Davies refers to the drummer Pete Best on the next page. I know that the Beatles turfed Pete for Ringo in August 1962. The paperback had been corrected to say:

“His first visit was the lunch-time session of 9th November, 1961.”

In the 1968 edition, the Beatles are flying 3000 feet over the Atlantic on their first visit to America. By the time the paperback came out, they upped their elevation to a standard (and safer) 30,000 feet.

Other spelling errors of important people in the Beatles’ lives: Rory Storme (instead of Rory Storm, corrected in the paperback); Jimmy Nichols instead of Jimmie Nicol; and Alex Mordes in the hardcover edition while Alex Mordas in the paperback when it is neither. It’s Alex Mardas.