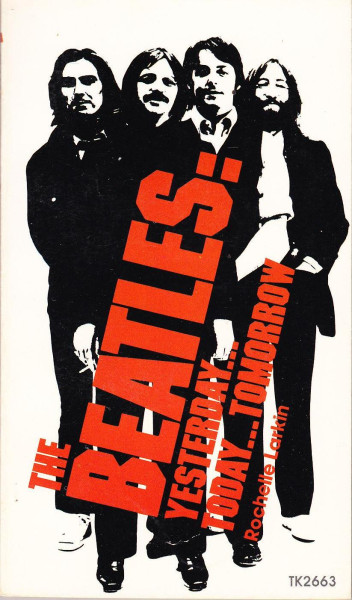 I must have acquired The Beatles: Yesterday…Today…Tomorrow by Rochelle Larkin at a Beatles convention over thirty-five years ago. I would have been in my mid- to late teens and therefore would have had no need for this brief juvenile biography, published by Scholastic Book Services in 1974. But as I have stated numerous times already as I report on the weeding of my Beatles book collection, when I was a teenager I bought every Beatles book in sight. So what if this book was written for a reader in primary school? And that it was only 108 pages long? I still bought it. And although I could have read it in just one day (as I did just now) it remained on my bookshelves all this time, unread.

I wonder why the author gave this book such a title when the second and third elements were hardly dealt with. When you realize the book only had 108 pages, the “Today” chapter started on page 93 and “Tomorrow” on page 101.

Larkin included photos on almost every page–it was rare to find a two-page spread with only text–and I was immediately struck by the number of photos that I had never seen before. It was a treat to see some of them, such as the first Carnegie Hall concert. At the end of the lengthy first chapter, which dealt with the Beatles as a group, she included six photos of the Beatles after the break-up. They should have been in chapter two. For the most part Larkin got the facts right, but the ones she got wrong I (of course) reproduced below. In all this was an intelligent Beatles history for young people, devoid of sugary gushing and exclamation marks. Now for the errors and inconsistencies:

About the songs included on the album Magical Mystery Tour:

“‘All You Need Is Love,’ which had been performed by the boys live on television a few months prior, and had become something of an anthem since Yellow Submarine used it so extensively, was also included.” (p. 69). The Yellow Submarine in italics refers to the animated film, which was released in the US in November 1968. The Magical Mystery Tour album was released a year earlier.

“One of the happiest of these occurrences was an album by Billy Preston, the soul singer and piano player who had been very popular in the fifties.” (p. 76). Preston released his first record in 1961 when he was fourteen.

The author also mixed up the chronology of Let it Be and Abbey Road. The former was recorded first yet it was released after the latter.