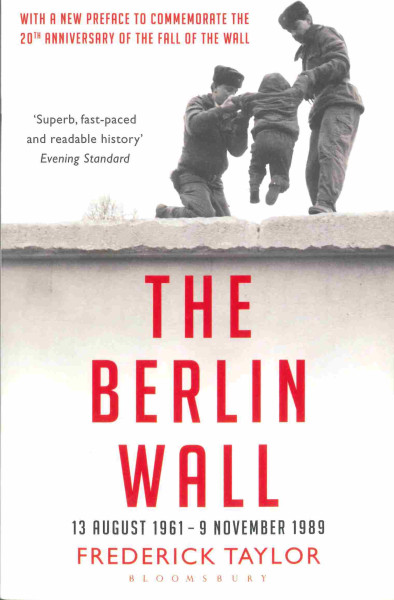 The Berlin Wall: 13 August 1961–9 November 1989 by Frederick Taylor is the last of the books I purchased in Berlin four years ago. It is the longest of them all, yet in spite of its length at 493 pages, still took me a painfully long four weeks to finish. There were several impediments to getting through this book any faster. While providing a history of Berlin was a necessity in order to create a portrait of the political situation that led up to the creation of the Wall, I didn’t think it was necessary to go all the way back to the city’s marshy founding. I plodded through the stories of kings and Napoleon and Prussia, just wanting to get through to the twentieth century already. Readers of my reviews are well aware of the beef I have with British publishers. These publishing houses must think all their readers have eyes with telescopic lenses. The font in this book was so small, and the font in the quoted passages within the text and in the endnotes was even more minuscule. That it was printed on greyish pages, versus on a brighter page that was more white, only made the reading experience an unpleasant chore. I seem to say that a lot about books I don’t like. Even though I will read them all to the end, I don’t always enjoy the time I spent getting there.

What made The Berlin Wall such a chore was that it was so boring. There is bound to be drama in the secret planning that went behind the decision to erect a wall. Thousands of East Germans were fleeing through Berlin, draining the country of its youth and intellectuals. The East was helpless to stop the flow, and saw a wall as its only solution. While many East Berliners were on summer holiday, authorities rolled out barbed wire on the night of 13 August 1961. Residents of the city woke up to find themselves suddenly divided, and the East Germans who woke up in West Berlin saw themselves the luckiest people on the planet. We all know the story, yet the telling left me waiting in vain for something exciting to happen.

Escape stories are always interesting, and Taylor provided accounts of escapes through tunnels, sewers, and over the Wall and its barricades that I had never read before. His access to declassified documents shed light on the true circumstances behind some escapees’ deaths by border security.Families of those who perished during escape attempts only found out after the Wall fell the truth behind their relatives’ deaths. Although Taylor had access to some declassified East German documents after the countries’ reunification, there were no revelations that proved to be extraordinarily surprising. Most of the time these formerly secret documents stated the truth about the downward spiral of the East German economy. The country was going downhill faster than anyone could imagine, and the Politburo saw the writing on the wall: the country was going to collapse.

The book didn’t start moving until the timeline reached the 1980’s, when Ronald Reagan took office. The power of the people in East Germany, in other Warsaw Pact states and ultimately in the Soviet Union itself all led to the downfall of Communism. The Berlin Wall became a can’t-put-down book as Taylor recounted the growing protest movements in Leipzig, and then the ouster of General Secretary Erich Honecker by the Politburo. It was exciting to read about the growing tension behind the Wall. The voice of the people kept on building and the regime could not stop it. The economy was worsening and the Soviet Union was not going to help. I sped through the final hundred pages. Getting to the collapse of the Wall was like waiting for the Titanic to hit the iceberg: I was on the edge of my seat as the timeline approached November 1989.

Since my copy of The Berlin Wall was a British imprint written by a Briton, I expected to see British spellings. Yet I found Taylor’s overuse of none the less to be annoying on the eyes, especially when found at the beginning of a sentence. Is this written as a three-word phrase in England, versus as nonetheless in North America?