The Black Homelands of South Africa: The Political and Economic Development of Bophuthatswana and KwaZulu 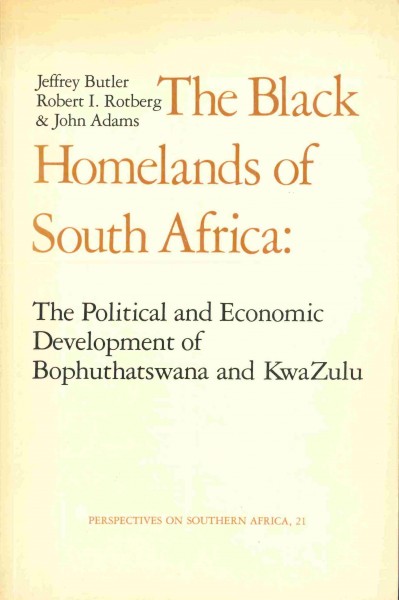 I bought The Black Homelands of South Africa: The Political and Economic Development of Bophuthatswana and KwaZulu by Jeffrey Butler, Robert I. Rotberg and John Adams when I was in Cape Town in 2013. I have long been interested in the homelands, or bantustan policy, and have already read books on Transkei, which I also bought when I was in Cape Town. While published in 1977, this book predated the independence of Bophuthatswana by a few months. It was the first book I read specifically on Bophuthatswana and KwaZulu (and I have more on the former at home) yet it was painfully slow to plod through. I knew I was in for a rough ride when after my third day I had only covered twenty pages. I am sorry to say that I found the text so thoroughly boring and repetitious that I could not wait to finish the book. It took me a long eighteen days to get through its 231 pages.

The authors covered such topics as bantustan administration, national income and public finance, economic development and the homelands’ future among its nine chapters and supplemented the text with many charts and tables. What I did not know about Bophuthatswana and KwaZulu was that each bantustan was originally fragmented into even more noncontiguous parcels of land than what they ended up being. As if what they ended up being was not enough of a enclaved nighmare of comedic proportions: Bophuthatswana was reduced to seven enclaves (from nineteen) and KwaZulu was reduced to 26 enclaves (from…seventy).

No wonder the authors stated:

“The administration of Bophuthatswana and KwaZulu is further hindered by the fragmentary and dispersed character of the two homelands and their populations, by the waste involved in servicing and administering noncontiguous fragments of territory, by a sheer shortage of physical facilities and hardware, and, above all, by the consequent need to rely upon the government of the Republic for administrative assistance.”

One reason I found this book to be so uninteresting was that the authors repeated the same facts over and over. I expect a certain degree of repetition in academic reads but this one really padded it out. One fact that was repeated was stated succinctly below:

“Homeland leaders have for a long time recognized their ultimate powerlessness beside the South African colossus. As realists they have made no secret of their cynicism about the purpose of the homelands: that their very existence has always served the domestic needs of the Republic and that their recent progress is designed to ward off a growing international challenge to the domestic policies of South Africa.”

The bantustans could never function as truly independent states as long as the Republic was pulling the strings. White South Africans were on all administrative committees and black Africans were denied rights–in their own “countries” even–that whites could enjoy in the Republic. These poor fragmented regions could not sustain themselves without South African assistance. Is it no wonder, since the Republican government made sure to excise the most fertile land for themselves? The homelands’ only natural lucrative resource, mining, was not even under their authority. The mineral riches in the bantustans, even after they were granted independence, would still be siphoned into the pockets of white South Africans. What kind of “independence” is that?

The authors concluded that as the first step on the road to self-sufficiency, the homelands must develop their ability to feed their populations. With the most fertile lands removed from the landscape like a sheet of dough from which only the cookies remain, neither homeland stood much chance:

“Agriculture must be the key sector in any attempt to develop the homelands as hospitable living areas and to create growing regions increasingly self-sufficient in food, raw materials, and jobs. Of all the homelands, Bophuthatswana probably has the lowest potential.”

It is no wonder that:

“Nonetheless, dependence on the Republic for over 80 percent of revenues is a major factor constraining the political and economic independence of the homelands.”

I can only imagine what revenues might go into the homelands’ coffers if they were allowed to profit from the mines located on their own lands. After this book was published, Bophuthatswana was granted independence, followed by Venda and Ciskei.