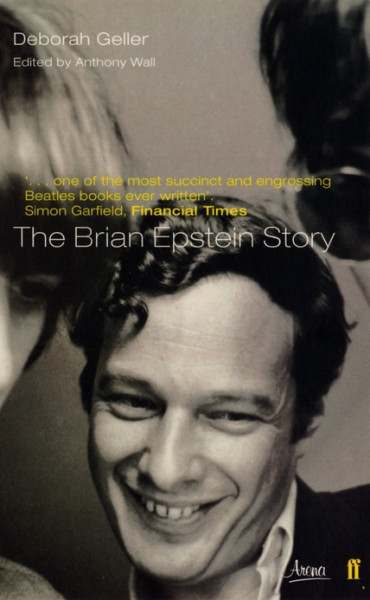 The Brian Epstein Story, compiled and written by Deborah Geller and edited by Anthony Wall was published in 1999 in the UK by Faber and Faber. This publishing house rivals Penguin in the UK for its minuscule fonts. I can state that this edition had the smallest typeface of any book I had ever read, so while its 180 pages did not make it a long book by length, it certainly qualified as jam-packed by content. The story of Epstein, the manager of the Beatles, was told in the form of interview excerpts from those who were genuinely closest to him, including Paul McCartney. Thus none of the quotations were from friends of friends or those who had no regular direct contact with him. In fact, most of those interviewed for the book were former business associates and were, in my opinion, highly credible.

There have been many rumours about Epstein’s personal life, and since he lived as a closeted gay man who repressed his sexuality, rumours run rampant. This conduct of life, as well as having a mother who blindly ignored her son’s reality by pushing seemingly eligible women his way, only led Epstein further into the closet. Such a way of life could only lead to risky rendezvous and The Brian Epstein Story does tell of blackmail attempts from former short-term boyfriends. Back in the 1960’s, homosexuality was still illegal in the UK and it would have been scandalous had word got out that the Beatles’ manager was homosexual. That Epstein also kept his Judaism under wraps, almost ashamed of it, cast his life under a heavier cloak of repression. His feelings of suffocation even led him to write his last will and testament at the age of 21. The will is reproduced in The Brian Epstein Story. Thus hiding his homosexuality and his Jewish identity gave Epstein a lifelong inferiority complex which led to a self-destructive lifestyle in the fast lane of partying and drugs and alcohol. Rex Makin, the Epstein family lawyer, said:

Epstein led a privileged life, the son of a successful furniture merchant. His father wanted him to continue in the family business but Epstein had other directions for his entrepreneurial spirit. He managed the family’s record store and through his work he found out about the Beatles. The Beatles in fact would frequent his store but he didn’t recognize them until he and his personal assistant Alistair Taylor went to see them perform for the very first time at the Cavern club. Taylor says:

“There were these four guys onstage in black leather, wearing what we call bomber jackets today, black trousers, black T-shirts, and they were so loud. There was smoking onstage and they were joking with the girls in the audience and it was just like, ‘Oh my God, what are we sitting here watching?’ I mean we were in suits. I always had to wear a suit when everybody else was freaking out. So here were these two straight guys who liked classical music sitting in the back two seats of this smelly, sweaty club. And these guys were just so awful. It was quite appalling, really.”

Those who were interviewed gave no credence to the rumour that Epstein only agreed to manage the Beatles because he was infatuated with John Lennon. Other Epstein biographies have stated this yet The Brian Epstein Story went as far as raising the point then refuting it with its quoted testimonials. I was glad to see that the author and editor didn’t shy away from dealing with the dirt.

The Brian Epstein Story reminded me of Edie: An American Biography, in that both were told in the form of interview fragments by those who knew the subject (in the latter case, Edie Sedgwick). I do not enjoy biographies written in this way, as each paragraph reads differently and there is no coherent narrative told by a single author. The flow is reduced to stops and starts, as each new quotation, or each new narrator in fact, has a different way of expressing himself. Often the interview passages would go off-topic, and it got confusing when one person would say something about Epstein’s life and another person would contradict him in the next paragraph with his own impressions.

Epstein managed to convince the Beatles to sign him on as their manager, and the group refined their style from slick-haired leather-jacketed rude boys to mop-topped suited-and-tied witty gentlemen. The Beatles trusted Epstein with his proven business sense, his vision for the Beatles’ future, and his respect for them as musicians with talent. The Beatles wanted to go places and Epstein showed them that he could deliver. He was unlike other managers of the time, in that Epstein took the artist fully into his care, paying for their hotel accommodation and even the gas they would use to drive from gig to gig. This is the norm for managers today, so I found it hard to believe that (English) managers of fifty years ago would only find the gigs for their clients and leave them to their own devices to get there.

This was not a laugh-out-loud book, but some quotations gave me a chuckle, even after multiple reads. Nat Weiss, Epstein’s American business partner, said about the design of the Sgt. Pepper LP cover:

“When the Beatles went ahead and put all these pictures on the Sgt Pepper cover and had no releases from anybody, Brian found out. It was a nightmare to think of thirty or forty people suing the Beatles. Brian said, ‘Look, as far as I’m concerned, put the album out in brown paper bags.’ I had a note to that effect. But Paul McCartney had called me and said, ‘Why is Brian upset? We can do this. It’s a fiesta.’ Brian hit the roof and said, ‘They must be on something,’ because he knew the consequences of something like that.”

Epstein by the time Sgt. Pepper was released felt less useful as a manager because the Beatles had decided to stop touring in 1966. He was prone to frequent suicidal thoughts and drug and drinking binges. The book ended after the death of Epstein by accidental drug overdose in 1967. I would have liked to read more about what happened to his estate and surviving family (and how they managed his estate) but unfortunately only five pages were devoted to the aftermath of his death.