The Case for Impeachment 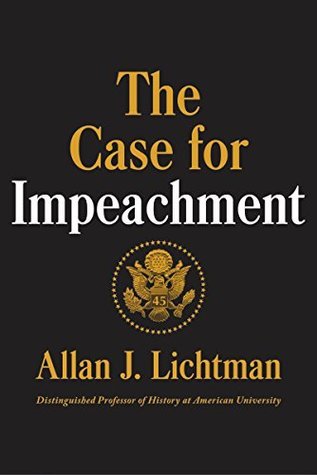 The Case for Impeachment by Allan J. Lichtman was a rapid read. What was so telling is that it was published in April 2017, yet seems so relevant today. I am in awe at the author’s sharpness of prescience. Lichtman could have written this book five minutes ago (and he surely must have started writing it way before April of last year) yet every case he raises for the Idiot’s imminent impeachment is heightened by stronger evidence gathered in the intervening year and a half. Lichtman, a professor of history at American University, started off by giving a short history of Andrew Johnson, the first American president to be impeached, and followed it with a chapter on what led to Nixon’s resignation. This history was important in order to understand the process by which the American government conducts an impeachment. I am a Canadian and likely more knowledgeable about American politics than my conned neighbours to the south are familiar with my own country, yet nonetheless I appreciated Lichtman’s easy-to-read rendition of history. This was no boring read, nor was it sensational. Anyone following the news will see that every point the author raises is enhanced today by the facts that have since come to light.

Lichtman outlined the Constitutional grounds for impeachment and what the Idiot has done to flout it or betray the law, whether it be by his abuses of power or his conflicts of interest. Lichtman does not believe (nor does really anybody, if I can be so bold) that the Idiot divested himself of his companies and left the corporate reins in the hands of his sons, who are never to breathe a word about the state of the companies to their father ever again. This seethes with conflicts of interest, especially if foreign leaders try to curry favour with the president by patronizing his hotels:

“Investigative reporters Rosalind S. Helderman and Tom Hamburger, who analyzed Trump’s foreign holdings, warned that ‘Trump’s election may usher in a world in which his stature as the U.S. president, the status of his private ventures across the globe, and his relationships with foreign business partners and the leaders of their governments could all become intertwined.'”

“‘All of this emanates from the problem with Donald J. Trump, the president, who simply rejects the notion that he can’t effectively have his business enterprises and be president at the same time,’ said Thomas Mann, a senior fellow at the Brookings Institution. ‘The conflicts of interest between the president and Trump enterprises has no precedent in American history.'”

Each day the news reveals more evidence to support Lichtman’s claims in books whose contents seem more explosive than the last. The author covers the Idiot’s war on women and the Russian connection as further grounds for impeachment. It is a short yet powerful book, one that will have you nodding at every page. The final paragraph resonates with midterm elections only two months away:

“The many robust demonstrations against President Trump will be like smoke through a chimney unless, like the revolutionary protests, they are put to a purposeful end. If investigations uncover traitorous collusion with the Russians or Trump continues to clash with the law, the Constitution, the environment, and the nation’s traditions and its security, the American people must demand his impeachment. In addition to mass protests, they should engage their representatives through petitions, e-mails, letters to newspaper editors, tweets, town hall gatherings, and face-to-face meetings, directed to the goal of impeachment. If Republicans in Congress remain recalcitrant, voters should be swift to dismiss them from office in 2018. Justice will be realized in today’s America not through revolution, but by the Constitution’s peaceful remedy of impeachment–but only if the people demand it.”