The Constitutional Framework for the Autonomy of Åland: A Survey of the Status of an Autonomous Region in the throes of European Integration 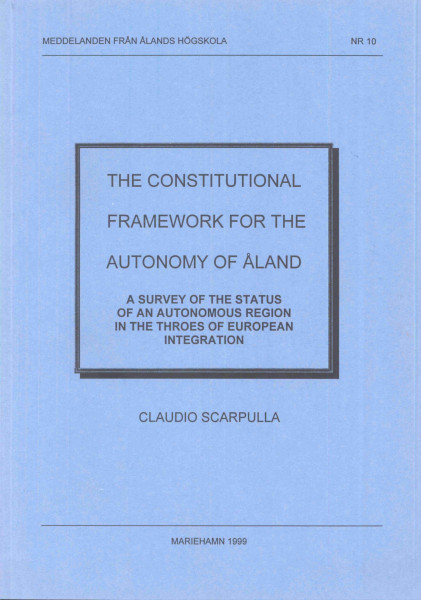 I picked up The Constitutional Framework for the Autonomy of Åland: A Survey of the Status of an Autonomous Region in the throes of European Integration [1] by Claudio Scarpulla when I visited the Åland Islands in 2002. This short work of 98 pages was the author’s LLM thesis at the University of Helsinki. An updated edition of this book can be found here.

The Åland archipelago lies between Sweden and Finland. The islands are an autonomous part of Finland where the official language is exclusively Swedish. When I was there I found that no one spoke Finnish–which didn’t surprise me–and those that spoke even a little did not want to. Since I speak no Swedish, the people preferred to talk to me in English.

The “Åland Agreement”, a term used throughout the book, refers to the dilemma over island sovereignty. The Swedish empire occupied Finland and the Åland Islands for six hundred years, then ceded both to imperial Russia in 1809 after the Finnish War. After Finland gained its independence from Russia in 1917, the Swedish-speaking Ålanders voted overwhelmingly to rejoin Sweden in two plebiscites. An international crisis was at stake, which the fledgling League of Nations had as its first case:

“The way the League approached the Åland question attracted considerable attention. This attention is justified because it was the first decision of an international organization on a matter which–according to the traditional system of International Law–would have previously been considered as a typical ‘internal affair’. In this respect, the settlement of the Åland question represented one of the first signs of a changing interpretation of the very concept of sovereignty, which underwent great transformations throughout the whole century.”

As an autonomous part of Finland, Åland has stringent requirements in regards to granting the right to vote in local elections, as well as having restrictions against those who do not possess the right of domicile to undertake a trade or profession or to acquire property. All of these restrictions have built a barrier against immigration, and have ensured that the islands remain Swedish and are not overrun by seasonal Finns.

I spent eight days reading this tiny book, whose font was minuscule. I cannot criticize someone’s thesis on the basis of its merit as a pleasure read, but The Constitutional Framework was a dry-as-dust read nonetheless. I found the technical talk about sovereignty and constitutionality extremely boring, yet the section where the author compared Åland with other autonomous regions, such as Greenland and the Faroe Islands with Denmark, to be highly interesting. I have not had much success so far in my Finnish book project. Perhaps there was a reason I left all of these books unread for so long. I will not be keeping this book either.

[1] The title page spells throes with a lowercase t.