The Dark Box: A Secret History of Confession 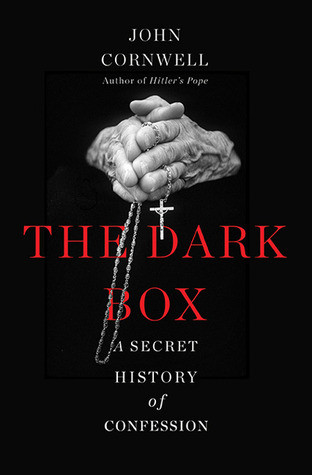 The Dark Box: A Secret History of Confession by John Cornwell provided only a brief history of confession from the establishment of the Roman Catholic church. I would have liked to learn more about this sacrament during the early days of the church and the response of early churchgoers. I admit that such a history would have constituted a dry read–interesting, yes, yet slow to plod through–however Cornwell devoted more of Dark Box to the so-called secret history of confession (which is, after all, what the title is all about): confession tainted by sexual improprieties committed within the “dark box”. And once I reached this part of the book, I sped right through it. Who can resist reading about scandals that are so vile they wind up reaching the pope?

It is ironic that the redesign of the confessional box in the sixteenth century led to more accusations of sexual abuse than under the old system. The former system, which entailed a penitent kneeling before the feet of a priest with no barrier separating them, led to instances of unwelcome touching and sexual advances:

“The box was meant to bring an end to the scandal of sexual solicitation, yet cases of sexual abuse of women brought against confessors appeared to be on the increase even as the Borromeo confessional became more widely used.”

Sexuality has been a taboo within the Catholic church for centuries. This in itself is not news. At one time even sexual intercourse within marriage was considered sinful if it was not engaged in for the sole purpose of procreation. The church’s preoccupation with sex and the emphasis on suppressing all sexual urges within the laity and the clergy itself dominated lists of prohibited acts and makes one wonder where the church’s priorities lay. It is no surprise that in a culture where even the most G-rated expressions of sexuality were considered mortal sins, priests would be in fear of eternal damnation just by having nocturnal emissions.

The confessional offered the sexually repressed priest an opportunity to hear about the sexual sins of his congregation while ensconced within a dark cubicle. His mind–and hand–would surely be tempted to wander as he heard the confessions of various sexual sins. Tell me that a sexually active woman confessing her forbidden acts of the boudoir while cloistered in a small dark cubicle won’t lead to trouble if the one who’s listening to it all is a similarly cloistered sexually repressed man. Confessional boxes were the precursor to phone sex. The temptation for the priest to elicit more naughty confessions from the penitent would be unbearable. A priest could justify this by saying he was merely doing his job, and wanting to do it well. Cornwell states:

“The phenomenon of sexual solicitation in the confessional during this period is perhaps inseparable from the background of clerical frustrations, inadequacies, and stress. Alcoholism among mendicant confessors was common.”

Sexual solicitation increased–inasmuch as cases were reported to the police–after Pope Pius X issued the decree in 1910 that children would now have their first communion–and required first confession–at the age of seven instead of at twelve. The damage this papal decree inflicted on Catholic children is still felt a century later. Children were brought up under a black cloud of sin and guilt. The innocence of childhood was polluted by the accusations that they were all venial and mortal sinners. How could a seven-year-old argue with a priest? And if you were a good boy or girl all week, how could you find anything to confess?

“For many children, the mental torture of confession began with the difficulty of finding ‘sins’ to tell. Many children invented sins only to regret it, realising that they had committed a sacrilege by telling a lie in confession.”

By the end of the twentieth century, Catholics had deserted confession. Adults, especially married adults who used contraception, abandoned the sacrament because they “refused to believe, despite the Church’s teaching, that their sexual behaviour was wrong”. This is but one of many reasons the church has suffered such a decline in members as well as in new priests: imposing a sex-negative doctrine and a refusal to evolve with the times.